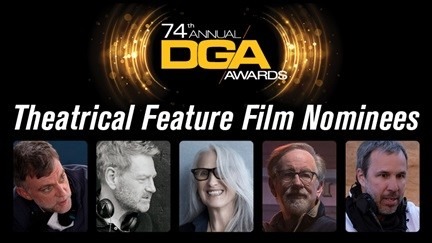 While waiting for the announcement of the nominations for the 94th Oscars which will take place in less than twenty-four hours, here are as an aperitif and a catch-up those of the Directors Guild Awards. The preliminary choices of the influential union of American directors were announced last Thursday, January 27 by its president Lesli Linka Glatter. After a 2021 edition in virtual and private format, the 74th ceremony should be held more or less in the old fashioned way, at the Beverly Hilton hotel in Beverly Hills on Saturday March 12.

Apart from the queen category of Best Motion Picture, on the side of documentary, television or advertising, we find this year names as well known as those of Kathryn Bigelow (iPhone 13 advertising), Barry Jenkins (“The Underground Railroad”), Barry Levinson (“Dopesick”), Raoul Peck (Exterminate all these brutes), as well as Robert Pulcini and Shari Springer Berman (“Succession”).

Even though the Directors Guild Award’s reliance on the Best Director Oscar winner has seen small lapses in recent years — most recently in 2020, when Oscar champion Bong Joon-ho for Parasite had been beaten there before by Sam Mendes for 1917 –, it is no less true that it is almost impossible for a film to win the Oscar for Best Film, without at least having been nominated beforehand by American directors. The only film to have achieved this strange feat remains a priori Miss Daisy and her driver by Bruce Beresford in 1990.

He is one of the most respected, even revered directors of his generation. Yet, in terms of prize money actually won, Paul Thomas Anderson (*1970) is still waiting for the moment of consecration. Will one of his most personal films finally allow him to take the leap? Unfortunately, nothing is less certain, since the rather intimate profile of Licorice Pizza and the commercial fate that goes with it hardly predestines him to a tidal wave of prestigious trophies. Even if his ninth feature film has already earned Paul Thomas Anderson the Best Director award from the National Board of Review and Best Screenplay from New York critics. In the end, it’s probably in this category that this teenage tale will hopefully win its consolation prize at the Oscars on Sunday, March 27.

Already nominated by his American colleagues in 2008 for There Will Be Blood, Paul Thomas Anderson manages to hit the mark with virtually every one of his films. Coming from the world of music videos and short films, to which he has remained faithful to this day, the director has been responsible over the years for films as significant as Boogie Nights, Inherent Vice and Phantom Thread. As for festivals, he won the Golden Bear in Berlin for Magnolia in 2000 and the Silver Bear for Best Director for There Will Be Blood in 2008, at Cannes the Best Director Award for Punch Drunk Love in 2002 and in Venice the Silver Lion for Best Director for The Master in 2012.

We continue in the register of eminently autobiographical films with Belfast. While we may regret the strongly commercial direction that the career of Kenneth Branagh (* 1960) has taken in recent years, this child’s tale seems like a wonderful homecoming for the Northern Irish director. It may even have what it takes to win the Best Picture Oscar, if winning the Audience Award at the last Toronto Film Festival is any good enough indicator. In short, it is the champion of the hearts of this awards season, going against the grain of the films which had allowed Branagh to make a name for himself from the end of the 1980s.

Celebrated at the time as the worthy successor to Laurence Olivier, the actor-director finally embraced the curve of the career of this master of Shakespearean adaptations more closely than he could have wished. Because Olivier had also abandoned, willingly or by force, the universe of Henry V and of Hamlet in his old age, appearing from then on in more or less caricatural jobs.

Kenneth Branagh isn’t here yet, but movies like The crime of the Orient Express and Death on the Nile, showing in France this Wednesday, does not bode well. No more than his recent performances in front of the camera with Christopher Nolan in Dunkirk and tenet. So let’s cross our fingers that Belfast either the film of the second wind of a filmography undeniably losing artistic speed at least since the beginning of the century.

Nominated five times for the Oscars in – historic fact – five different categories, including the last time in 2012 as Best Actor in a Supporting Role in My Week with Marilyn of Simon Curtis, Kenneth Branagh is named for the first time by his colleagues from across the Atlantic.

New Zealand director Jane Campion (*1954) made cinematic history by winning the first Palme d’Or at Cannes for a film directed by a woman thanks to The Piano Lesson. In the process, she was the second director nominated for the Oscar for Best Director. It was in 1993 and ’94. Almost thirty years later, Campion is again at the center of all attention, since she can legitimately consider becoming the third Oscar-winning director, after Kathryn Bigelow for Minesweepers in 2010 and Chloé Zhao for nomadland Last year.

However, between The Piano Lesson and The Power of the Dog, Jane Campion has not been idle. As proof, his most respectable career in terms of cinema, with films such as portrait of a woman, In the Cut and BrightStar, as well as the “Top of the Lake” series broadcast in France on arte. So far, his half-intimate, half-epic production of The Power of the Dog won him critics’ prizes in Los Angeles and New York, as well as last year’s Silver Lion for Best Direction at the Venice Film Festival.

For his film, the road to the Oscars could well stop at the level of the nominations, if only because of its direct online distribution by Netflix. On this subject, Jane Campion is the only representative of the platforms this year, to the detriment of her colleagues Joel Coen (macbeth), Adam McKay (Don’t Look Up Cosmic Denial) and Aaron Sorkin (Being the Ricardos).

Steven Spielberg for West Side Story

He is a veteran in this group of five filmmakers who are not yet so young. This may not be enough to assure him that his name will be on the list of Oscar nominees tomorrow. Afterwards, a legend of American cinema like Steven Spielberg (* 1946) will recover without problem. As he had managed to do after his four other Directors Guild Award nominations, they weren’t followed by an Oscar nomination either. Because Spielberg and the union is a story that goes back a very long way, almost to the beginning of his illustrious career.

Appointed eleven times before West Side StoryBetween Jaws in 1976 and lincoln in 2013, he had even won the golden plate three times: for The color purple, Schindler’s List and We have to save the soldier Ryan. Without forgetting the honorary prize of the union which he had obtained in the year 2000.

The box office trajectory of West Side Story nevertheless makes him the weak link among nominees for this year’s Directors Guild Awards. While the original adaptation of the musical by Robert Wise and Jerome Robbins had been quite in tune with the times in the early 1960s, winning ten Oscars in 1962 including those for Best Picture and Best Director, the so-called remake elaborated by the old king of Hollywood ran out of steam very quickly in all the rooms where it was screened in the world. Hence our prognosis that he should rather side with The Empire of the Sun and D’Amistad than that of most of the aforementioned victorious films.

Little by little, genre cinema is making its way to the high authorities of American cinema. Canadian director Denis Villeneuve (*1967) had the first benefit himself five years ago, thanks to his first nomination at the Directors Guild Awards for First contact. However, the potential of his adaptation of Frank Herbert in terms of price reminds us more of the fine career of Mad Max Fury Road by George Miller, winner of six technical Oscars in 2016. After its release was repeatedly postponed due to the coronavirus pandemic and ran the risk of releasing straight online, Dunes Villeneuve version could not dream better.

After a rather timid debut on the international scene at the end of the 1990s, Denis Villeneuve had begun to find his audience in France and around the world from Fires in 2010. Since then, he had been able to impress both critics and spectators through films as diverse as prisoners with Hugh Jackman enemy with Jake Gyllenhaal, Sicario with Emily Blunt and blade runner 2049 with Ryan Gosling. The public enthusiasm for Dunes made possible the start of the second chapter of the futuristic saga on which the director is currently working.

The six directors nominated for the 7th prize for Best First Film: