After a long desert crossing, Steven Soderbergh fall for Julia Roberts and treats himself to an ultra-smart Hollywood trip with Erin Brockovich.

But what happened to Steven Soderbergh after he received the Palme d’Or in 1989 for his first film? Sex, Lies and Video ? Was it a simple hit of limestone or the desire to undertake a 180 degree turn? For nearly a decade, until Out of reach, released in 1998, each new project he tackles seems to take him away from early recognition. A rebellious and independent spirit that he ended up adjusting to the wishes of Hollywood studios on the occasion of two of his most important films, Erin Brockovich first and Traffic afterwards.

While the second earned him the Oscar for best director, the first served his star actress, Julia Roberts, as a launching pad to the firmament. At the height of her fame, the actress in turn won the coveted statuette for this role of magnificent loser, and pocketed the modest sum of 20 million dollars in salary (just enough to round off the end of the month, that Obviously). “I’ll be ready to go back for him in two days“, she will confide during her coronation at the Oscars, taking Soderbergh to task. So there, we fall (not at all) from the clouds.

While waiting for their new collaboration on Ocean’s Eleven, Full-frontal and Ocean’s Twelve (chance definitely does things well), Erin Brockovich was a resounding success internationally (250 million dollars collected for a 52 million budget), not to mention the rave reviews from the press. And if Soderbergh had directed, as a good elusive pirate that he is, his most anti-system Hollywood film?

She is the weapon of seduction/mass destruction

At first reluctant to realize Erin Brockovich, a project he discovered through a pitch sent by his producers, Soderbergh revised his judgment when he got his hands on the screenplay written by Susannah Grant. On paper, the plot develops with confusing simplicity around a female character of exceptional caliber, inspired by the real Erin Brockovich. A linear approach that the filmmaker had not yet experienced at the time and which finally convinced him to embark on the adventure.

“In an ideal world, everything I work on would undo what I’ve done before, or at least undo my most recent experience (…) I’m always looking for something new, and there’s something that scares me in there. I must feel a kind of apprehension confronting it. It can be a practical fear, or a creative fear“, Soderbergh will declare in a passionate interview given to Filmmaker Magazine on the occasion of the 20th anniversary of the release of the film. And with Erin Brockovichthe fear of blending, at least in part, into the mold of the Hollywood biopic represents a stimulating new challenge to be met. 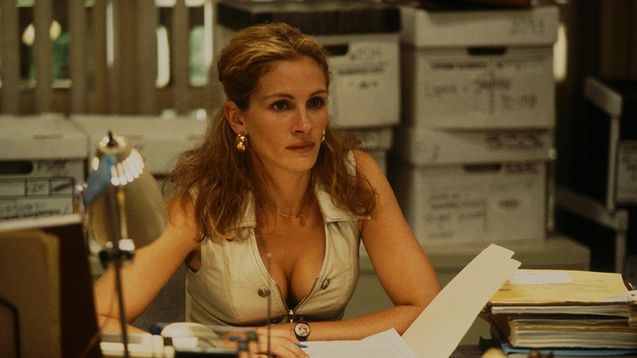 To underestimate it is to condemn yourself

By seeking a form of minimalism capable of doing justice to the characters and their struggle, the director chose to shoot most of the scenes with a two-camera device, and to resist more broadly any desire for effects or special effects. It is this logistical refinement that also makes the filming experience incredibly pleasant and fruitful. The last shots are taken earlier than planned and $5 million is saved on the initial allocated budget. Suffice to say that it is the dream of any producer and Soderbergh does it for the pundits of Universal Pictures. What a man !

Erin Brockovich: why it’s the Wonder Woman that cinema deserves