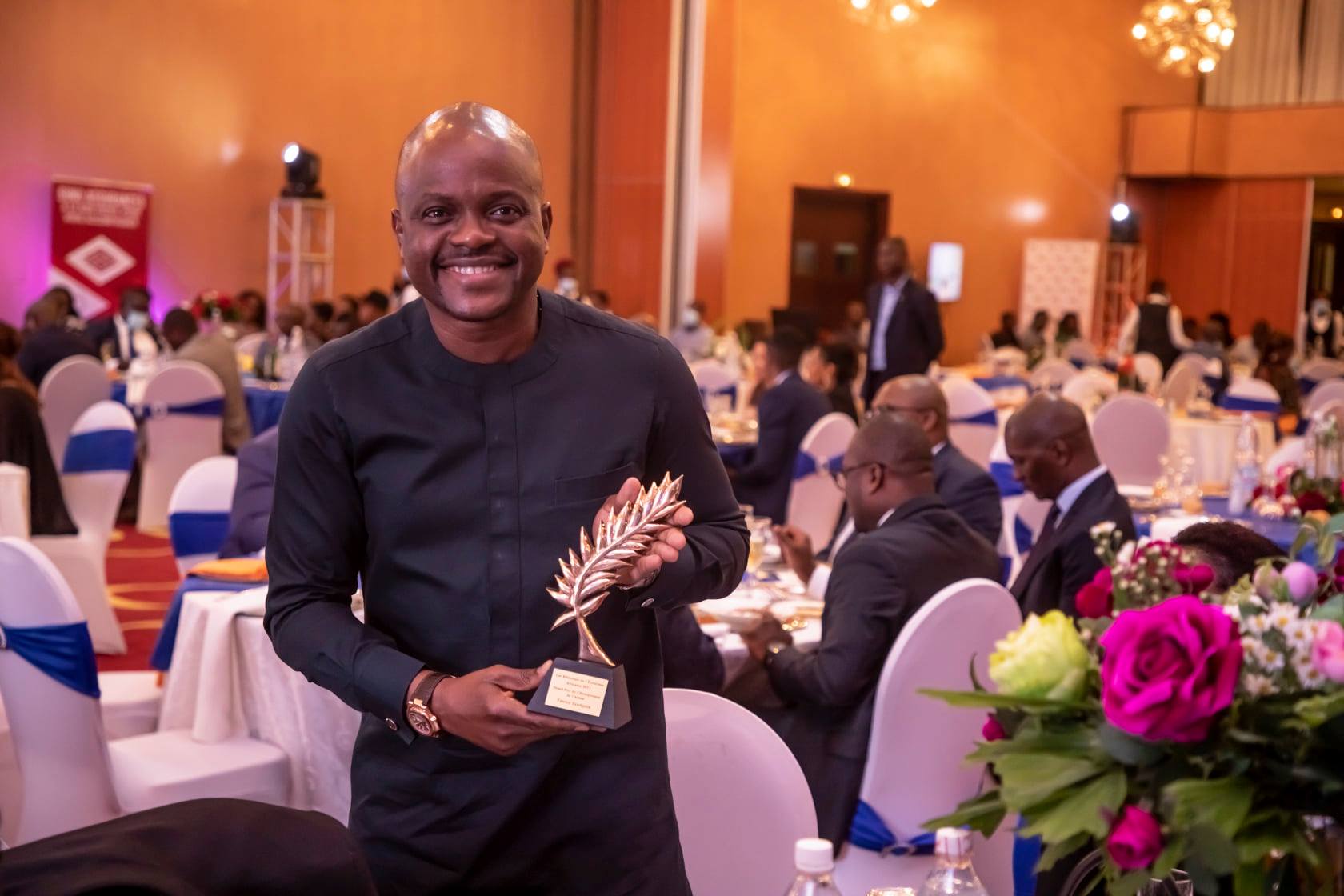 You see Fabrice Sawegnon, but do you really know him? Here is the other side of his story revealed by Vincent Toh Bi.

“You black people want pay raises because you want to live like us, you want to go to the supermarket like us and eat what we eat.” This is the response he receives to his request for a salary increase. Fabrice grabs the Director (a non-National) by the collar. A fight ensues. Fabrice is threatened with dismissal by his bosses. A series of conciliations begin and he is “pardoned”. But that day in June 1998, he made his decision: sooner or later he will create his own company with new blood, an African vibe, international expertise. This is the definition of Voodoo, the roots in the earth and the head in the world.

You see Fabrice Sawegnon, but do you really know him? Here is the other side of his story:
His father died when he was 3 months old. His mother, a civil servant secretary-typist, “manages” by small businesses to supplement her salary. In 1989, he was 17 years old when he saw a great drama that reoriented his whole life.
He goes to the EPP RAN Plateau primary school. After the BEPC, he decided to move towards a literary series. But his mother suggests that he opt for the Second C, a branch that does not really suit him. At the time, he was ashamed to be in a literary series. A famous Minister of the time had decreed that the Pupils in literary series were not useful to Côte d’Ivoire and the parents took it very seriously. Fabrice continues in 1st D. But he is not gifted for this branch. Avogadro f….rde. He failed the Bac Probatoire and reoriented himself in Première B (Management), at the Lycée Technique d’Abidjan.

LIRR ALSO: The 2022 civil service and ENA 2023 competitions launched: what you need to know

After Bac B, he successfully passed the INSET competition in Yamoussokro and obtained a DUT in Management-Commerce after his training. At that time, he was already a fiery student with a strong character. He is in the various Student Committees. In his last year of training, during the 1994 open days at INSET, he was responsible for mastering ceremonies. He does this animation so well that he is noticed by a French director of the company Jal Afrique. He invites her to a job interview two days later.
7 days after obtaining his DUT and leaving school, Fabrice was hired as a sales representative at Jal Afrique with a salary of 180,000 CFA francs (about 300 Euros) at the time, a relatively good salary for someone who goes out fresh from school. He is a sales administrator. That big title just means he was selling the paint to the factory. 3 months after his engagement, he passes an internal test. He is not the best candidate, but unlike his friend Kouakou, he has the driving license required for the job. He gets the job and a service vehicle. He is responsible for External Sales and supervises the areas of Cocody, Yopougon, Abobo where he offers his paints to hardware stores, traders and construction sites.

One day, the Sales Manager, another Frenchman, asked him to represent him at a ceremony in a communication company, Mc Cann, on the 8th floor of a building in the Plateau. Fabrice goes there and is captivated, hypnotized by what he discovers: young creative people with a trendy style, beautiful fitted offices, a relaxed atmosphere. He discovers the advertising industry and its actors. He no longer sleeps. He discovered another part of him.

With his temperament and his sociability, McCann offers him a job. But his big boss refuses to release him. It’s as if the company your employer sends you to hires you.
He misses a professional opportunity but not his dream. He still has to wait. One day, the uncle of a friend, then Managing Director of Air Ivoire (Colonel Nicolas Adom) recruited him as a sales representative for the airline and sent him to Bouaké for a 3-month training.

He resigns from Jal Afrique and without any contract with Air Ivoire settles in Bouaké. The approval is that the contract will be signed after three months if the training is successful. Fabrice does 2 months and 20 days of training. He only has 7 days of training left to become a major salesperson, when the CEO of Air Ivoire dies. A few days later, a new CEO was appointed, who took care of firing him.
Fabrice is on the street. He submits dozens of CVs to a good number of companies, without any response and not a single interview. One day, he will present his suffering to God at the Church of St Jaques in Les 2 Plateaux. The next day, he receives 3 job offers at the same time. He chooses PANAFCOM, a communication agency run by a Frenchman, Daniel Brechat, which inspires him with creative freedom and volunteering. You remember the Fanico soap and the Palme d’Or cooking oil. It is Fabrice who is in charge of the promotion.

After 2 years of hard work, he receives a comfortable salary of 450,000 francs. But one day, by an imprudence, Fabrice learns that a young European trainee, under his responsibility, receives 500,000 francs, which is more than him. Fabrice, we know him, it’s not the kind of things he digests easily. He asks for a raise, which is refused. He decides to leave. But he won’t make the same mistake he did 2 years ago. He must grab another firm branch before letting go of the one he is on. He goes looking for a job.
He enters into talks with an Ivorian owner of a large communication agency (later to become Minister), but he asks for 100,000 francs more than his current salary. She refuses. He refuses the job.

In his search for a new job, he arrives at a new, extremely rigorous communications agency. He was made Head of Sales and Account Manager for two major soft drink brands for 17 African countries. He travels and makes connections on the continent.

But in this new agency, some remarks made by non-national employees put him off. During a team briefing and validation of a product ad, one of them felt that “all black people only dream of seeing snow, let’s put a lot of snow in this ad”. Fabrice points out to him that this remark displeases him. But the ad passes.

Fabrice is convinced that there is a whole other way of selling products through a very local and very African approach.
In June 1999, he resigned, Voodoo Communication was born. 6 months later, there is a coup in Ivory Coast. His business stops, like many others at this time. The recovery is slow. During his 6 years in various functions, Fabrice has carved out a fine address book. So he gets reliable customers. At the time, he was one of the few Ivorian companies in the industry and that didn’t help him. To make its activity dynamic, it pursues vertical expansion by the radius of activities and horizontal by the number of products.

In doing so, he is risking political marketing in Gabon with the late President Omar Bongo. This approach has worked for him and he is pursuing it in some countries.
The experience is taking well. He would also like to carry it out in Côte d’Ivoire in the midst of a military-political crisis. He already knows “Petit Amadou”, his brother Guy’s teacher in Koumassi. “Little Amadou” Amadou Coulibaly (now Minister of Communication), brought him close to Massere Touré Koné (now Deputy Secretary General of the Presidency of the Republic). At the time, she returned from Paris and took care of the communication of the President of the RDR, Mr Alassane Ouattara.

In 2008, the two people mentioned inform Fabrice Sawegnon that Mr. Alassane Ouattara wishes to organize a call for tenders to select the company that will take care of the Party’s communication. Fabrice is already well established, now popular. He believes that the call for tenders is not necessary (for a political party in a period of political unrest and security uncertainties) since he thinks he has the capacity to ensure. Massere Touré Kone and Amadou Coulibaly tell him that this is the rule established by their boss and that there are no other alternatives. Fabrice is then reluctant to participate. Hamed Bakayoko calls him on the phone and encourages him to compete.

The 7 companies that bid are therefore invited to the office of Mr Alassane Ouattara to present their offers. Fabrice shows up in ripped jeans just the way he liked them. When he enters the interview room, he sees 20 senior RDR officials around a large rectangular table. Among them, Alassane Ouattara himself and his wife. This is the first time he has met the President.
During the presentation, Fabrice is direct, gives undiplomatic answers and tries to convince by realistically depicting the political terrain of the moment. The day after this grand jury, Mr Alassane Ouattara invites him to a one-on-one meeting at his office, congratulates him for his outspokenness and informs him that he was the one chosen, following the analysis of the different offers by the technical team set up for this purpose.

Since then, Fabrice has remained close to the man who two years later became the President of the Republic of Côte d’Ivoire.
Fabrice continues his political marketing activities in 6 other countries. And this success opens wide doors and levels of influence. . He frequents the Eyadéma, Amadou Toumani Touré, Ibrahim Boubacar Kéita, Kérékou, Zinsou. He studied for Georges Weah, Idrissa Seck, Soumaïla Cissé.

In memory of the difficult social life of his childhood, he turned to local development. He presents himself to the Mayor of the Plateau and fails. There followed a big controversy and a media hurricane.
He is lynched on all sides, booed, jeered at, mocked, insulted, vilified. Social networks make it their scapegoat. He is the subject of parodies and experiences difficult moments of loneliness when relatives join the swell against him and turn their backs on him. He also suffers that his mother is accused and delivered to popular condemnation. Ca, he does not digest it.

Fabrice isolates himself and rediscovers that fame doesn’t just make friends. For months, it remains discreet and rare. Fabrice draws lessons, comes back to the fore with another level of professional commitment. Arrows continue to whistle beside his ears and above his head. But Fabrice continues his walk with his head held high…….
The little Student, orphan, badly oriented, who only obtained a DUT like any diploma, protester, resigning recidivist, became big, at the head of Voodoo Communication, considered the largest Ivorian communication agency and the one of the most influential in the sub-region.

Here is a model of life and struggle for the Ivorian youth. Fabrice Sawegnon, a model and an example in Ivory Coast and in Africa.
MORALITY: You will accomplish your life with your deep nature, with your energy and with your faith and any obstacle only participates in the realization of your destiny.
Young, Fabrice Sawegnon says to you: Go for it until there is no more track for the race.

Fabrice Sawegnon, the guru: Vincent Toh Bi reveals the other side of his success