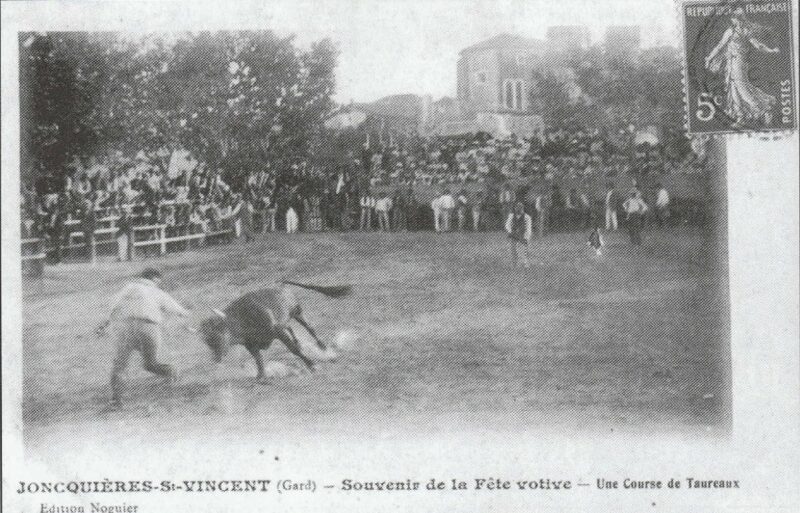 Created by Mr. Couran in 1922, the bullfighting club l’aficion de Jonquières-Saint-Vincent has since continued to shine in the Gard territory, stronghold of the Camargue race. Its centenary will be celebrated, with great fanfare, this Saturday, May 14.

From its first year of creation in 1922 and while the bouvine had already acquired its letters of nobility on the lands of Jonquières-Saint-Vincent, the bullfighting club l’aficion had around a hundred members. The story is long and inevitably punctuated by various and varied anecdotes. Review The Camariguo which no longer appears, had listed some of them for the purposes of an article on this bullfighting club.

We thus learn that the famous Beaucairois raseteur, Julien Rey, multiple winner of the Palme d’Or and the Golden Cockade, made his debut in the Jonquière arenas, facing the cockardiers of the Robert manade, in 1923. This same year, an imprudent spectator will be mortally wounded by the Bechet bull.

In 1925, the Jonquière revolt thundered, opposing the young people of the village to the manadier Robert. The latter accuses them of mistreating the cattle during the bullfighting games, so much so that he refuses to do a night race. The intervention of the mayor at the time made it possible to ease the tensions between the two parties. If the race took place, the manadier was thanked afterwards. The Marquis de Baroncelli takes over. In any case for two years, resentment does not last in Jonquières-Saint-Vincent“, can we read in the review.

Over the years, the activities of the bullfighting club grew and gained notoriety until war broke out. The arenas are abandoned, the torils destroyed by the Germans. The aficion bullfighting club made its comeback in 1945 under the presidency of Lucien Jeannon, who was succeeded by Alfred Riey in 1950. In 1960, the municipality had new bullrings built to replace those which had been restored after the war. .

Two years later, while well-known ranches and raseteurs meet in Jonquières-Saint-Vincent for various events, the club organizes the first Raisin d’or, won by André Soler. It will be necessary to wait until 1975 to see the second edition of this local trophy, which still persists today.

After Denis Gibelin (1970), Régis Blayrat (1975), Jean-Luc Agniel (1986), Paul Hérail (1989) and Rachid-Ait-Idir (2003), it is now Tarasconnais Ludovic Estevan, 35, who chairs the Jonquièrois bullfighting club. It currently has about fifteen members. ” The passion for traditions and the taste for transmission have always animated the aficion of the bullfighting club. And we continue that mission today. It’s not easy, it requires a lot of work in terms of preparation, organization, but it’s necessary for the bouvine to continue in Jonquières-Saint-Vincent. It remains to be seen whether we will still be there to celebrate the 150th anniversary“, laughs Ludovic Estevan.

Eleven Camargue races are scheduled each season, including young bull races or new bull races, four League races and four Future races. Thus, at the same time as the first day of the Golden Raisin, the centenary of the club will be celebrated on Saturday May 14.

From 9 a.m., the Domaine de la Boissière will open its doors for a breakfast hosted by the peña Lou Carretie de Fourques and the group Li Cigalou jounquieren. This will be followed at 11 a.m. by a long abrivado at the Labourayre manade followed by a convivial meal at the village hall in Jonquières-Saint-Vincent.

In the afternoon, from 4:15 p.m., the Trophée de l’Avenir will begin with the capelado in tribute to the former presidents of the bullfighting club. Then the bulls of the Bon, Baltière, Rouquette, Laurent, Méjanes, Cuillé and Nicollin herds will be shaved by Chanat, Diniakos, Dunan, Bakloul, Friack as well as Zekraoui.

” We are very happy to have a raseteur du Trophée des As, launches the president. He has a very special history with the club, since he was seriously injured in 2013 by a bull“, called Bechet – which recalls the 1923 event mentioned above – from the Saumade manade. A bandido will take place from 7 p.m. before the opening of the bodega evening from 8 p.m. ” We are proud to organize this party for the hundred years of the club. We hope that many visitors will come to discover the world of bouvine. » Posters signed by the Jonquièrois painter Jean Turrel have been posted all over the territory to attract the curious and the aficionados.

The Aficion bullfighting club is supported by the town hall of Jonquières-Saint-Vincent. Information and reservations on 06 63 94 94 52.