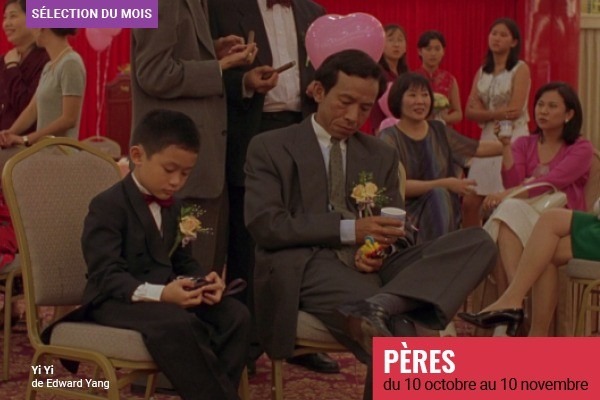 Don’t be afraid, you haven’t missed Father’s Day, as it has already taken place this year in mid-June! It is therefore without the slightest pressure of imposed recognition that you will be able to revel in LaCinetek’s new cycle, online for two weeks and again until Wednesday, November 9 inclusive. The monthly selection gives pride of place to the figure of the father in all its forms, sometimes severe or affectionate patriarch, sometimes surrogate parent overwhelmed by the tasks of paternal responsibility. Something to comfort you, if you are in the middle of a storm of questioning of your role as a father on the part of your offspring or if you are still hesitating to take this decisive step!

Since we are currently without news of a possible change in the subscription formula to the platform founded by Pascale Ferran, Laurent Cantet and Cédric Klapisch, here is a quick reminder of how it works: for less than three euros per month or thirty euros per year, you can enjoy unlimited access to the ten films – plus a bonus short film in October – of the selection of the month on the site by LaCinetek. Always as transparent in its communication, LaCinetek specifies that the two Asian films of this selection, He was a father by Yasujiro Ozu and Yi Yi by Edward Yang, are only available to its French subscribers. For Belgium and Luxembourg, they are replaced by Children’s faces by Jacques Feyder and … the bonus short film So by Bruno Podalydes.

And if you feel like extending the theme of this month’s selection to LaCinetek’s video-on-demand catalog, it still contains a good number of masterpieces around paternal love, such as example The Bicycle Thief by Vittorio De Sica, The taste of sake by Yasujiro Ozu, ParisTexas by Wim Wenders, The Boy by Maurice Pialat and The promise of the Dardenne brothers. Finally, since this month, the selection is also available on channel 110 of Orange TV under the same conditions as on the site.

The many prestigious awards collected by the films of the selection of the month should tell you their high degree of quality. Indeed, there is a respective winner of the Oscar and the César for Best Film, a Palme d’or, two Cannes awards for directing and an Oscar for Best animated short film. Just that ! However, it is once again a very nice complementarity that takes precedence among the choices made by the breeders of LaCinetek. So it’s up to you to take a short tour of world cinema, both in geographical and historical terms, from Taiwan to the United States via Greece, Italy, France and Morocco, as well as the 1930s. until the 2000s!

Bruised fathers and fulfilled fathers, improvised fathers and fathers fully assuming their essential role: there is a bit of all of this in the dozen films currently online. Stories that we know by heart but that we never get tired of, like the fun Three men and a bassinet by Coline Serreau and the moving Kramer versus Kramer by Robert Benton, as well as rarer works, such as the epic of a society in full crisis, Yi Yi by Edward Yang, and the animated short film by a future great in this field, Dutch director Michael Dudok de Wit (The Red Turtle). Without forgetting the masterful interpretation of Marcello Mastroianni in the paraphernalia of The Beekeeper with Theo Angelopoulos and one of the most beautiful films by Bertrand Tavernier, Sunday in the countryside.

The “Fathers” selection of the month of October 2022

The Beekeeper (Greece / 1986) by Theo Angelopoulos, with Marcello Mastroianni and Nadia Mourouzi
The Son’s Room (Italy / 2001) by Nanni Moretti, with Nanni Moretti and Laura Morante – Palme d’or at the Cannes Film Festival in 2001
The Sleeping Child (Morocco / 2004) by Yasmine Kassari, with Mounia Osfour and Rachida Brakni
He was a father (Japan / 1942) by Yasujiro Ozu, with Chishu Ryu and Shuji Sano
Kramer versus Kramer (United States / 1979) by Robert Benton, with Dustin Hoffman and Meryl Streep – 5 Oscars including Best Film, Best Director and Best Actor for Dustin Hoffman in 1980

Father and daughter (Netherlands / 2000 / short film) by Michael Dudok de Wit – Oscar for Best Animated Short Film in 2001
Little Lisa (France / 1930) by Jean Grémillon, with Pierre Alcover and Julien Bertheau
Three men and a bassinet (France / 1985) by Coline Serreau, with Roland Giraud and Michel Boujenah – César for Best Film, Best Screenplay and Best Supporting Actor to Michel Boujenah in 1986
Sunday in the countryside (France / 1984) by Bertrand Tavernier, with Louis Ducreux and Michel Aumont – Best Director Award at the Cannes Film Festival in 1984 and 3 Césars including Best Actress to Sabine Azéma in 1985
Yi Yi (Taiwan / 2000) by Edward Yang, with Ninazhen Wu and Issei Ogata – Best Director Award at the Cannes Film Festival in 2000