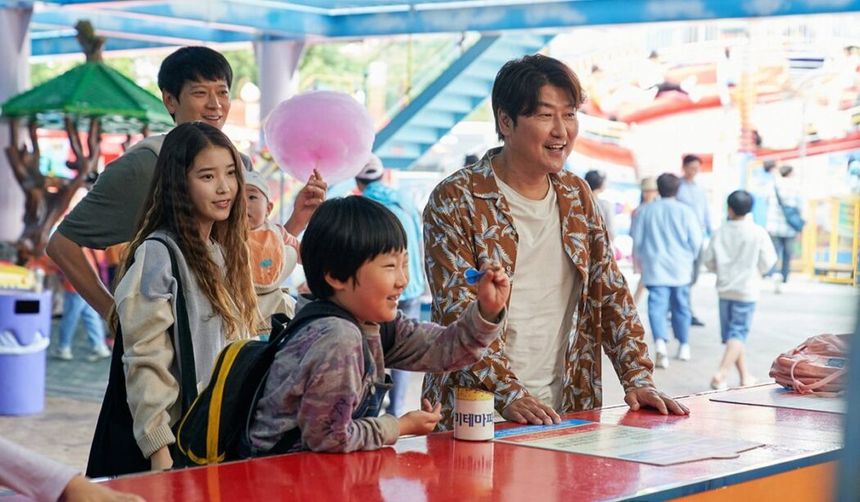 “The way a filmmaker treats a child character is a real indicator of his qualities as a director: it takes a high conception of cinematic art to refuse the ease of the edifying story and to resist the temptation of the touching portrait of children. who know how to face everything, sometimes better than adults. » (extract of

Film childhoods, by Carole Desbarats, our guest in the Journal du Cinéma). A high conception of cinematographic art is obviously what our guests, the filmmakers, have Lise Akoka and Roman Gueretwho, for their first film,

The worstGrand Prix Un Certain Regard at the last Cannes Festival, and Valois de Diamant for best film at the Angoulême Festival, question precisely how and in what way children are represented, moreover from a disadvantaged background, in this genre in itself of the cinema that is the social film.

“The Lucky Stars”, by Hirokazu Kore-eda

Another great childhood filmmaker, the Japanese Hirokazu Kore-edathe author of

A family matterin his new film,

The lucky stars, brings to Korea his questions about filiation and the reinvention of the family by a group of marginalized people. A band of broken hands are engaged in child trafficking; a story that was inspired by these Korean baby boxes where mothers can abandon their newborns, and where the male star of the films of Bong Joon-ho, Memories of Murder at Parasitethe awesome Song Kang-ho. “This actor carries within it a kind of duality, made up of lightness and depth, tragedy and comedy, explains the filmmaker. And because the subject of the film is a rather heavy subject, I wanted precisely for this reason to highlight the most solar part of Song Kang-ho. As soon as he arrived on set and throughout filming, he carried a form of joy within him to play this character, and this dimension really radiated throughout the film. What also interested me was the contrast between the subject and the character it embodies. I tend to think that talking about a tragic subject in a dramatic tone does not attract the viewer’s attention, that one cannot make oneself heard by telling things in this way, whereas changing point of view, trying to see from a little distance what is happening allows to highlight comic traits or points of view that are a little external and different, which allow certain situations to be put into perspective.”

The cinema journal: “Childhood of cinema”, by Carole Desbarats

The adult spectator in front of a film which represents children is both in the nostalgia of the green paradise of his own childhood, and in the position of one who, by identifying with them, learns in turn by watching them. This, on condition that the said children are not treated as reductions of adults, but as subjects in their own right, that is to say humans like the others. Provided also that they are not smoothed, cute, “ripolined”, to use the favorite expression of the essayist Carole Desbarats in his fascinating book on the subject,

Film childhoods. She shows how the way of representing a child in a film is a marker of the artistic, not to say moral, requirement of a filmmaker, which notably involves the choice of whether or not to make a child smile the screen…”Most of the time, children are presented as smiling, including after the worst disasters. It’s a stereotype. And his paradigm is Shirley Temple, this adorable kid who, from the age of 4, made the delights and successes of Fox, she was a ray of sunshine for Americans during and after the great recession of 1929. Roosevelt said his country would be fine as long as it had Shirley Temple with it. She played the role of an imaginary little soldier defending the motherland with her dimples. (…) Some filmmakers have all my respect precisely when they take the risk of not showing that. Truffaut said that he had prevented Jean-Pierre Léaud from smiling for 3 months during the filming of Four Hundred Blows, because he did not want this child to be represented as we expected him to be. Likewise, the strength of a film like Pony de Doillon is that the little girl is so unhappy that she is not at all in the smiles.“

NT Binh’s chronicle: “Alone in the night”, by Christian Stengel

Alone in the nightof the very little known, not to say completely forgotten Christian Stengel, is a funny film, detective and musical, released in 1945, but shot during the Occupation, which features a young Bernard Blier in one of his first film roles in a trench coat and slouch hat on the trail of a singing serial killer who strangles women in the Parisian night.

Outings of the week

If you are already filling your Christmas hood, we recommend two beautiful video editions, and a magnificent book:

At the house of

Potemkinit is the monumental edition of the Metropolis of Fritz Langin its 2K restoration, again with lots of gifts, including the first book, 250 pages, devoted to the visionary masterpiece, but also the reconstructed versions, in 2001 and 2010, to be as close as possible to the original version of 1927, before various amputations.

And then finally, a film that has become a book, it’s the very pop

Who are you Polly Maggoo?of William Kleinwhich became thanks to the editions

delpire & co a very voluminous and breathtaking album that is as much a photo novel as a comic strip, in a layout based on stills and text from the film, supervised by William Klein himself before his death last September.

The Bambola, by Patty Pravo (from the soundtrack of The worst)

Excerpt from the film The lucky starsby Hirokazu Kore-Eda (2022)

Excerpt from the film Pony, by Jacques Doillon (1996)

Excerpt from the film Alone in the nightby Christian Stengel (1945)

Alone in the nightby Jacques Pills