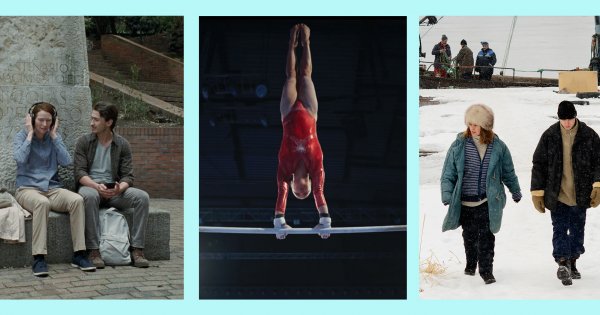 What films should I see in theaters for the month of November? Films inspired by books, French films, biographical films, moving films, the season continues to offer a panel of cinematographic choices.

We are moved by the adaptation of the eponymous novel by Annie Ernaux on the intimate odyssey of a young woman forced to have an illegal abortion in the France of the sixties in The event, we are captivated by the biographical film Supreme which traces the beginnings of the rapper duo of NTM, or we are shaken by Olga, the fate of an incredible gymnasium fleeing its country.

Small health reminder all the same, the health pass is always mandatory at the entrance of the cinema (proof of vaccination or negative Covid test).

The event by Audrey Piwan

Adapted from the eponymous novel by Annie Ernaux, The event recounts the struggle of a young girl, Anne (Anamaria Vartolomei)) to have an abortion. Far from being anachronistic, while abortion is still threatened or even banned in many countries, Audrey Diwan’s second achievement confronts us with patriarchal horror, pain and blood. A radical and lived-in feature film.

NTM is perhaps the biggest French hip-hop group. Rather than checking all the boxes of the official biopic in school, Supreme focuses on the late 80s and very early 90s, when NTM was made up of twenty daredevil lascars (!) and brings to life scenes all sweaty, sensitive and embodied, between the two heroes – Kool Shen and Joey Starr – and their crew.

Audrey Estrougo poses a delicate look at the meteoric rise by Kool Shen (Sandor Funtek, completely inhabited by his role) and Joey Starr (Théo Christine, brilliant too). Rather than turning them into bad boys, the director dwells on the endearing dimension of the characters: from violent fathers to unloved sons, the phenomenon NTM was built on an emotional void filled by a story of friendship.

Through a montage of archives (politicians and media of the time) which punctuates the rise of the duo, the film draws up the hollow portrait of a youth from the suburbs and abandoned by politicians. We reconnect with the contentious impact of the pieces, their corrosive force in the face of social injustice and the behavior of certain police officers in the estates. A point of view that feels good.

Memoria. Eleven years after his Palme d’Or for Uncle Boonmee, the Thai filmmaker deploys his imagination in a new zen reverie with star Tilda Swinton. Suffering from mysterious tinnitus, the actress wanders in the sweaty atmosphere of Bogotá in search of a revelation. An animist and sensory trip in which invites itself, among other things, a flying saucer.

Olga is a brilliant Ukrainian gymnast who trains for the Olympics But it is 2013, and she has to join Switzerland because of the clashes between the authorities and the demonstrators of her country. This first raw film tells of the contagion of the sporting world through the political world and the sacrifices involved in commitment. It is also a sensitive testimony on the mother-daughter bond. To discover.

A train, a young woman, a stranger… Here are all the ingredients for a romance against the backdrop of the Russian steppe. Except that she is a foreigner, a lesbian and a researcher, and he is a worker and an alcoholic. An affection will however be born between these two lonely souls and give rise to un beautiful trip behind closed doors, nocturnal and hypnotic, establishing this film, Grand Prix at Cannes, as a formidable catalyst of fiction.

Compartment n ° 6 by Juho Kuosmanen, with Seidi Haarla and Yuriy Borisov. Already in the room.

The Olympics by Jacques Audiard

Paris 13th district of the Olympiades. Emilie meets Camille who is attracted to Nora who herself crosses paths with Amber. Three girls and a boy. They are friends, sometimes lovers, often both. The film premiered at the 2021 Cannes Film Festival.

Find the interview in 7 clues of Jehnny Beth, singer and leader of the group Savages, who plays a “cam girl” for the new film by Jacques Audiard, available in the magazine Marie Claire of December 2021.

Quebec, late 1960s, Sylvette and Anglomard welcome their 14th child: Aline. In the Dieu family, music reigns supreme and when Aline grows up, a gift is discovered for her: a golden voice. When he hears this voice, music producer Guy-Claude has only one idea in mind … make Aline the greatest singer in the world. Supported by her family and guided by the experience and then the budding love of Guy-Claude, they will together write the pages of an extraordinary destiny.

Valerie Lemercier is not just the director of this film inspired by the life of Celine Dion, she also plays the main role. Find in the magazine Marie Claire of December 2021, the childhood photo of the actress and her memory of a young bridesmaid barely 3 years old for her aunt’s wedding.

Films to see in cinemas in November 2021