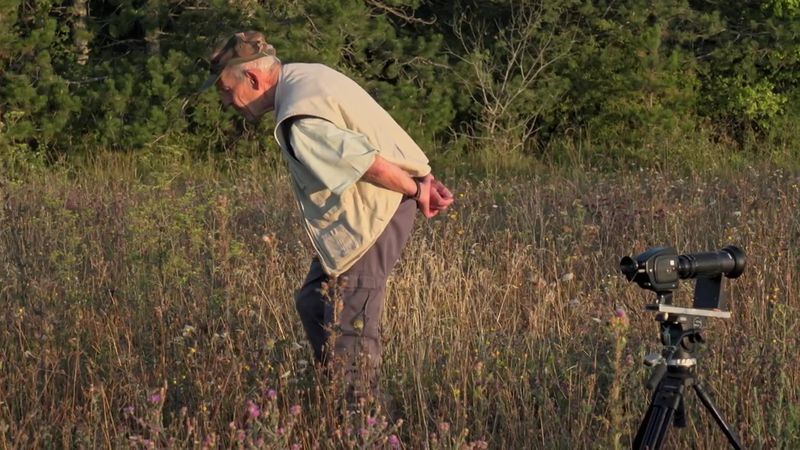 The film “Le butcher cinéaste” is the story of Roger, a butcher who worked for 40 years in Beaune and who, since his retirement, has embraced a new life, that of a filmmaker.

Super 8 is a format invented by Kodak in 1965 to keep memories of the whole family, of amateur cinema in a way. But this format has intrigued a number of filmmakers, and it is in particular on Super 8 that very famous filmmakers like Steven Spielberg and John Carpenter cut their teeth.

Roger only shoots in Super 8. He films insects in nature and does “shot/edited”.
His short films are a real success, winning awards around the world including at the famous Cannes Film Festival.

I can’t believe that my films are shown almost everywhere and that Super 8 interests young people so much!

Roger began to make family films in 8mm and switched to Super 8 in the 1960s. At that time his job as a butcher was very demanding and left little time for his passion for filming. In Beaune, in the Côte-d’Or, his shop is renowned for its 100% homemade products and for the warm welcome of Josette, his wife.

He started editing in the 80s and made his first film on the theme of marbled ham, a subject he mastered perfectly.

Roger and Josette retired in 2003 and sold their business.
The former charcutier then devoted himself totally to his passion: making Super 8 films, most of them having the theme of nature.

In the surrounding countryside he puts down his camera and surveys the surroundings. Cap on his head, arms crossed behind his back, nose riveted in the vegetation, he goes in search of insects to film.

Although Roger has taken part in numerous amateur film festivals, it was in 2012 that his career “took off” and became international.

He is invited to curta festival 8International Super-8 Cinema Festival in Curitiba, Brazil, for his son Rémy’s documentary “Super 8 mon amour”.
Roger, who had won the prize for the best Super 8 image the previous year, was invited as a “senior filmmaker” and even hosted a Master Class!

This is the first and only time he has traveled this far: “I won’t do it again now because I’m at an advanced age but I don’t regret going!”

On the plane taking him back to France, he is called by the steward who shows him around the plane. He has the privilege of being invited into the cockpit when landing in Paris. Delighted, he takes his camera to immortalize this moment: “I was impressed but despite everything I have images in the cockpit in Super 8!”

In 2016, his son, director Rémy Batteault, entered him in a Super 8 competition organized by Straight 8, a British association founded by Ed Sayers, a Super 8 madman.
The principle of this contest is to shoot a 3-minute reel without the possibility of doing any editing because the film is sent undeveloped!

He directed, as usual, a film on Burgundian insects entitled “Splendor in the grass”.

Among the hundred films received, a jury selects 8 films which are screened during the Cannes Film Festival.
Roger, like the public, is viewing his film for the first time in the dark room.
A consecration for this man who never imagined for a second climbing the steps of Cannes!

Josette, his wife is also impressed.

This film is also screened in 2019 in London on the occasion of the 20th anniversary of Straight 8.
For this ceremony, Roger did not come empty-handed. He brought his famous marbled ham to give the English a taste of one of the jewels of Burgundy gastronomy. !

2018 is an important year for Roger who finds himself for the second time in Cannes with a film imagined by his son Rémy and which they made together: “Winter of my life”.
This film explores in 3 minutes 20 and in English the life of the couple he forms with Josette, told by Roger… or almost! Roger does not speak English, so it is Rémy that we hear on the film. The film is screened on his birthday.

Celebrating 78 years at the Cannes Film Festival… not bad for a butcher!

His son took this opportunity to give him a small Super 8 size Palme d’Or!

Roger becomes a regular at the Croisette. In 2019 he presented the film “Chasseur d’images”, translated into “Nature Hunter”. This film catches the attention of Robbie Ryan, the cinematographer of Ken Loach and Asif Kapadiadirector of documentaries on Amy Winehouse or Maradona.

The film by Agnes Varda, The Gleaners and the Gleaner, has a heart potato as its emblem. One day, Josette discovers a heart-shaped carrot.
Following this amusing discovery, her son Rémy sends Agnès Varda a postcard with the famous carrot.

When the director decides to “tell the post-film”, she leaves to find those she has filmed in The Gleaners and the Gleaner but also goes to meet new gleaners following the many letters received.

This is howAgnès Varda goes to Beaune to the family charcuterie to meet Josette and Roger for her film 2 years later where we see Josette, very moved, reading the portal card sent by her son to Agnès Varda.

In the family garden Roger films aphids, ants and a ladybug installed in his apple trees. Josette, who has finished hanging up her laundry, then turns into a lighting designer, holding a “homemade” reflector to bring as much light as possible to the ladybug.

When she’s not acting as a lighting assistant, Josette puts her voice to her husband’s films.

Without Josette, Roger’s journey would be quite different. If this one leaves her husband free of his country excursions in search of subjects to film, she is of all the displacements of Roger during the festivals and does not sulk his pleasure!

A discreet complicity that continues after more than 50 years of marriage.

“Le butcher filmmaker” is the singular story of this likeable man under the admiring and sometimes amused eye of his son, the director Rémy Batteault.

It is also, and above all, a declaration of love and admiration from a son for his father.

See you on our documentaries page

From family charcuterie to the Cannes Film Festival, the unique story of a Super 8 film enthusiast