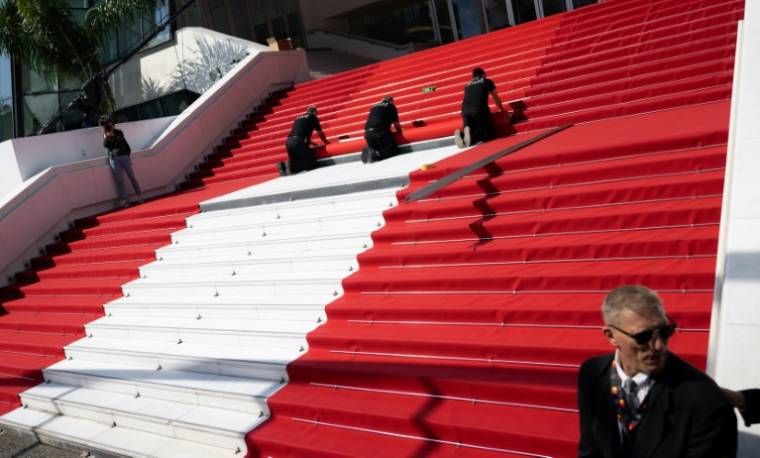 A Hollywood star, Forest Whitaker, then a crazy zombie comedy signed by the director of “The Artist”: kickoff Tuesday evening of the 75th Cannes Film Festival, an edition between 7th art, stars and shadow of the war in Ukraine.

In the morning, the red carpet for this 75th edition was rolled out on the famous steps. Just in time to welcome stars and festival-goers, as well as the members of the jury, chaired by French actor Vincent Lindon, who took up residence in Cannes on Monday evening.

There will be many influencers this year, especially those from the social network TikTok, the festival’s new partner, but deprived of their smartphone on the red carpet, the label obliges…

At 7:00 p.m., the opening ceremony will be chaired by Virginie Efira – also expected on screen for her role as a survivor of an attack in “Revoir Paris”.

Former television host, the actress warned Monday that she would not refrain “from making people laugh”, during the event broadcast on France 2, and by Brut. “I’ll try to keep it short,” she promised.

But the international star of the evening will be Forest Whitaker, who at 60 will receive an honorary Palme d’Or for a career marked by an Oscar for his portrayal of Amin Dada, the Ugandan dictator, in “The Last King of Scotland” (2007), or his role as a killer with Jim Jarmusch in “Ghost Dog” (1999).

The American actor, also at the head of a charity that fights against poverty, from South Sudan to Mexico via Seine-Saint-Denis, is a regular at the Croisette, where he won a interpretation in 1988 for “Bird” by Clint Eastwood.

The atmosphere then promises to change radically, with the opening screening of “Cut!”, by Michel Hazanavicius, a crazy parody of zombie films and a declaration of love for all films – even the most failed.

The film, which is released in theaters simultaneously, will act as an outlet for a world of cinema trying to recover from the pandemic: “Cut!” “is joyful, it highlights the people of the cinema, and I hope it makes you want to do it,” the French director told AFP, “very happy” to return to Cannes as the opening.

A few hours earlier, festival-goers will have been able to go back in time, and rediscover “La Maman et la Putain”, one of the films that made the legend of Cannes, in 1973. Some cinephiles will finally see it, and for the first time: half a century after having caused a scandal, this major work of the New Wave signed Jean Eustache, had not been reissued, and had become difficult to view for questions of rights.

The film has now been restored, and two of its performers, Jean-Pierre Léaud and Françoise Lebrun, should attend its Cannes screening with emotion, before its theatrical release on June 8.

Cannes, which ends on May 28, will enter the heart of the matter the next day: a strong symbol, the official competition begins on Wednesday with the screening of the latest film by Russian Kirill Serebrennikov, breaking with the regime. He will be able to come for the first time to defend his film in person. On the other hand, the Festival refuses to welcome “Russian official representatives, government authorities or journalists representing the official line”.

But “we are going to show absolute and non-negotiable support for the Ukrainian people”, said Thierry Frémaux, the Festival’s general delegate, on Monday, with several films selected.

Side red carpet, the cameras will heat for the rise of the steps of the team of the new “Top Gun” (out of competition), including Tom Cruise.

Ladj Ly, member of the jury and director, alongside Vincent Lindon, actor and president of the jury, in Cannes, May 16, 2022 (AFP / CHRISTOPHE SIMON)

On the director’s side, among the filmmakers in the running for the Palme d’Or (21 films in competition), Park Chan-wook (“Old boy”) returns with a sulphurous investigation (“Decision to leave”), James Gray presents “Armageddon Time “, with Anthony Hopkins and Anne Hathaway, while others, already medalists, will try to win a new trophy, including the Dardenne brothers (“Rosetta”) with “Tori and Lokita” or the grating Ruben Östlund (“The Square” ), with “Without filter”.

From Forest Whitaker to Hazanavicius: stars and zombies kick off at Cannes