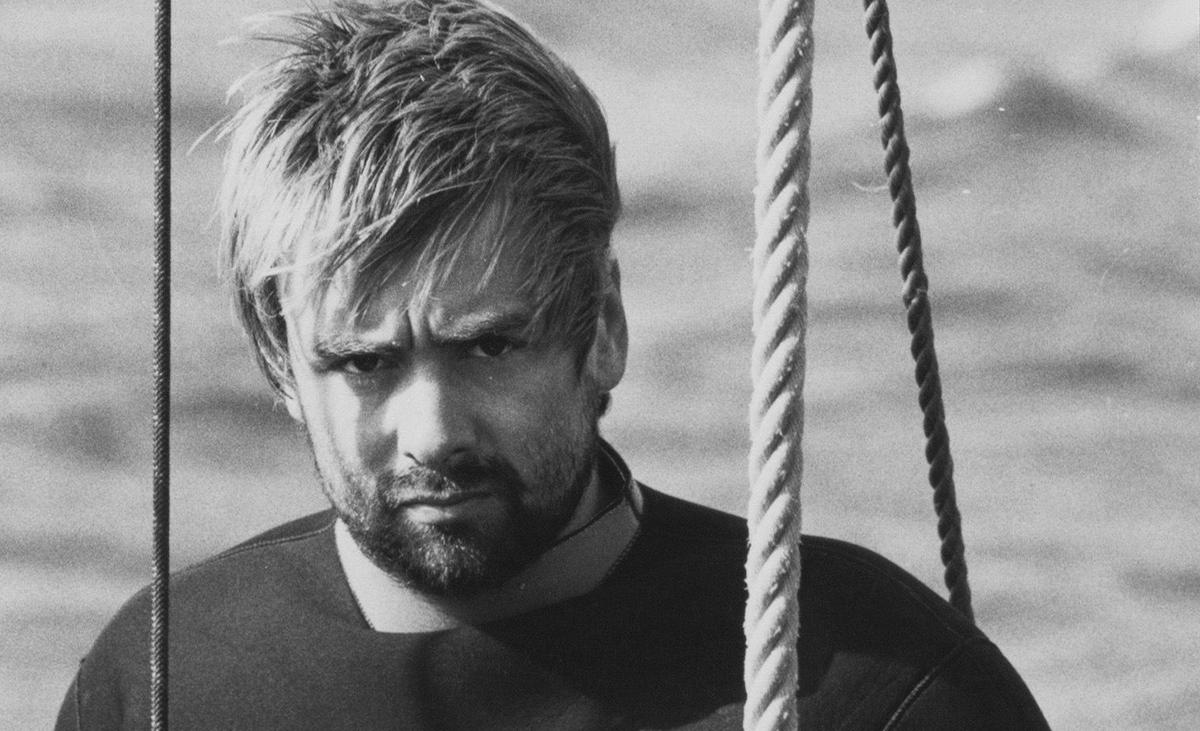 The beard doesn’t even give him a semblance of maturity. At 30, Luc Besson is still a chubby teenager who welcomed his Cannes selection with the candid jubilation of a schoolboy admitted to playing in the big leagues. So as not to spoil his pleasure or that of the spectators, he kept “the Big Blue” in secrecy until the last day.

“It took ten years of my life and I still have my head in the seabed. »

“Let me refine it for you, offer it to you on the best terms,” he would say to the curious, impatient to discover this film which took nine months to shoot and eight months to edit. A week before the official opening of the Festival, Luc Besson was still wearing out his sneakers galloping from one lab to another to finish mixing the American version of “Big Blue”. “I have crazy stage fright. I saw all my friends go to Cannes full of hope and come back completely demolished. This audience of professionals is the most difficult in the world. I reassure myself by thinking that I will have here a screen 26 meters wide and perfect acoustics to project my 70 mm film with its magnetic Dolby, digital SR. »

He’s lost his tan, but his tousled hair remains discolored from distant seas. In Paris, he seemed as distraught as a fish fallen from the bowl. Even the little blue dolphin pinned to his leather jacket nosed sadly towards the tarmac. “The idea of ​​summarizing my film makes me sick. I don’t want to make extract washers out of them. It took ten years of my life and I still have my head in the seabed. We’ll talk about it in Cannes when you’ve seen it. Call me, I’ll be at the Majestic…”

At 11 a.m. yesterday morning, the large Louis-Lumière auditorium, which can accommodate 2,400 people, was packed. At 1:30 p.m., after offering two hours and fifteen minutes of aquatic romance, the director finally explains, with ingenuous fervor, why “Le Grand Bleu” is a gift to those who remain faithful to their childhood dreams. “I learned to walk in water. My parents were diving instructors and I grew up between the shores of Yugoslavia and Greece. »

It was in Morocco that he met his first dolphin.

It was in Morocco that he met his first dolphin. An immediate crush of the 10-year-old kid for the marine mammal. He wants to become a dolphinologist. He would have continued to live in the water if a diving accident had not prevented him from the intoxication of the depths. The cinema saves him from depression. Another crush at the age of 20 for the camera, on a set where he was a props man, decided his vocation: he would be a director. He learns to swim in troubled waters and delivers “The Last Fight”, twice awarded in Avoriaz. Follows “Subway” with Isabelle Adjani and Christophe Lambert who valiantly defend a botched scenario.

“Subway” was nevertheless successful and Luc Besson was able to defend his idea of ​​a film about the romance of a man and a dolphin with Gaumont. The production grants him a budget of 70 million francs. He tells his project to the diver Jacques Mayol and follows him to the island of Elba. With him, he rediscovers the big blue, those first thirty meters of diving which are the most voluptuous because the light there is unique. Mayol, a dolphin specialist and world record holder for snorkeling to have descended more than 100 meters, will be the common thread of the film. The first part is totally inspired by his life, the second leaves room for the imagination. Two screenwriters, Marylin Goldin, collaborator of Péchiney, and Bob Galand, who wrote “Tootsie” with Sydney Pollack, help him to identify the hero.

“Dreamers may seem abnormal, but everything in the world is the result of a dream.”

Near him, Jacques Mayol (1), the adventurer of the seas, specifies: “Dreamers may seem abnormal, but everything that exists in the world is the result of a dream. Orientals say that what we believe to be real, what we perceive with our senses is no different from the world of ideas and utopia. The coexistence of the real and the imaginary does not need to be explained. Luc tried to transcribe it through image, emotion, light and music. »

For Luc Besson, happiness simply needs no words. It is shared, communicated. The welcome from Cannes proved him right. And, if he had proved him wrong, the director would not have denied the child who had vibrated for a dolphin off the coast of Morocco, his ten years of love for his film. Regine Magne. Article published on May 12, 1988.

For man, nothing is impossible…

Between contemplation and lyricism, Luc Besson has found his authentic and sincere path.

Thirty-two years after “The World of Silence”, by Jacques-Yves Cousteau, winner of the Palme d’Or in 1956, Luc Besson presented “Le Grand Bleu” out of competition on the Croisette. This mystery film, since no one had seen it before the screening in the large auditorium, immediately became a film-event. Going beyond direct cinema and the Cousteau-style exploration of underwater spaces, Besson “opened up the soul of diver Jacques Mayol and tried to communicate to us his passion for the deep sea and for dolphins.

The vision of the “Big Blue” reconciles us with an ideal.

All things considered, it is indeed the same passion that animated Hawks filming “Red Line 7000” (about car racing) or Kaufman filming “Heroes’ Stuff” (about airplane pilots) or Kubrick paying, in “2001, a space odyssey”, homage to cosmonauts. Simple scenario that could be summed up in one sentence: “Two divers, a Frenchman (Jean-Marc Barr) and a Sicilian (Jean Reno), meet a New Yorker (Rosanna Arquette) during their competition which takes them from end to end of the world. The challenge of these marvelous dives: descend in apnea to 100 meters deep and more.

Will Rosanna succeed in distracting these conquerors from the useless or will she have to confine herself to the old trilogy: children, cooking and the Church? The dream of Icarus, that of the mountaineers conquering the Annapurna, bathes in joy, sometimes candor and nostalgia, the wanderings of diving companions. We may find the script a little thin, the dolphins too rare, the sea a little absent… But between contemplation and lyricism, Besson knew how to find his authentic, sincere path and reveal an admirable e “Little Prince”, the young Jean -Marc Barr. The vision of the “Big Blue” reconciles us with an ideal. For men, nothing is impossible: a somewhat naive motto, but which has nevertheless proven itself! Jean-Loup Demangeat. Article published on May 12, 1988.

For the Gaumont cinema, the summer of 1988 will be blue. “Luc Besson’s film is a real social phenomenon,” confided its director, Michel Dhivert, to Sud Ouest on September 2. The attraction that “the Big Blue” exerts on young people and perhaps to relate to a psychoanalytical aspect of its subject. There is something fascinating about the sea and the depth”. With 77,250 admissions over sixteen weeks and a success that is growing instead of dulling, the film can hope to smash the record of “Jean de Florette” which had attracted 95,000 spectators in Bordeaux, in twenty-nine weeks.

The sequel proved him right. The success of the Big Blue was far from drying up. Three months later, the Girondine Stéphanie Boursicaut, 16, who came from Cazaux to Bordeaux to see “the Big Blue” at Gaumont was lucky. The ticket office of the complex designated her as the 100,000th spectator of the film in Bordeaux! It was Wednesday, November 2: “I really liked ‘the Big Blue’, declared Stéphanie Boursicaut, yesterday, of a reception at the Brazilian Garden, Cours de Verdun, I found the photography very beautiful”, could -we read in Sud Ouest on the following November 10.

Soundtrack of all superlatives

Stéphanie, who is “a little scared when she dives”, appreciated the actors’ performances all the more. The director of Gaumont and Michel Martin, regional distributor, gave him several gifts: a pocket containing posters of the film, a badge, a book “Le Grand Bleu” (Ed. Ramsay), autographed by Luc Besson, a permanent three months for Gaumont-Bordeaux and fabulous music from the film on laser disc, which was making its debut at the time). Soundtrack of all superlatives, the music of Eric Serra (1) perfectly transcribes the deepest feelings of the hero of the film, Jacques Mayol, but also his feelings during the dives…

As on November 2, the young girl was accompanied by her friend Ludovic Kolchak who was to be the 99,000th or 101,000th viewer of the film. One and the other dipped their lips in a cocktail of the same color as the feature film, while Luc Besson congratulated them by interposed magnetic tape.

The two Girondins having been the first to pass the 100,000 mark, they will also be the first, in January 1989, to discover the copy of the film in a long version (three hours). We will hear “lots of new music and we will see lots of new images”… Word of the director. Cathy Lafon

(1) The hero of the Big Blue, then embodied by Jean-Marc Barr, was Jacques Mayol. Creator of performances, the diver was the first man to go down to a depth of one hundred meters in apnea in 1976. numerous gold and platinum records, with more than three million copies sold.

In 1988, when France plunged into “Le Grand Bleu”, the cult film by Luc Besson