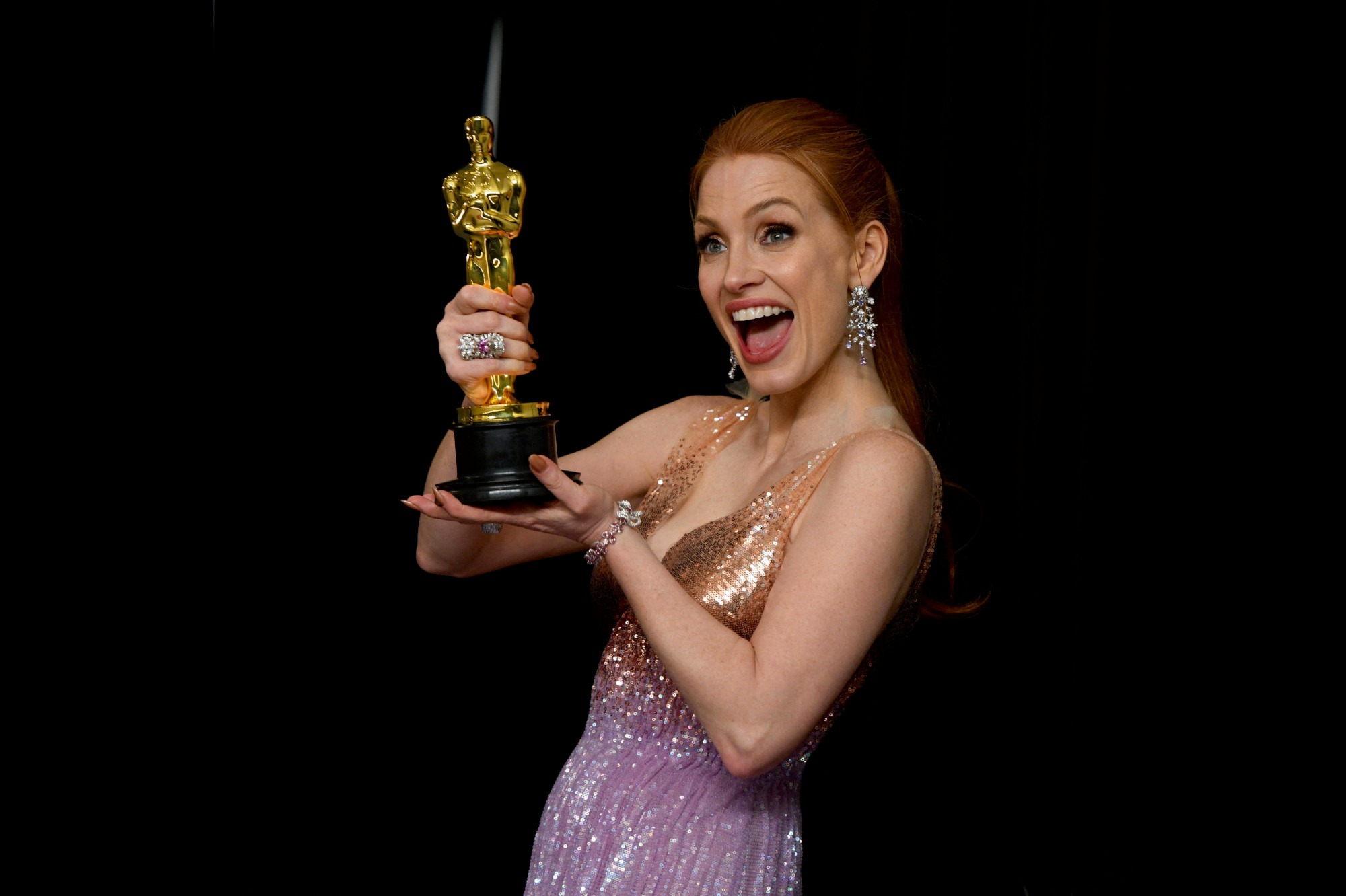 Princess for a day, committed actress forever. Jessica Chastain was consecrated for her role as Tammy Faye, an American preacher with an incredible destiny who became an LGBT icon. The opportunity for this feminist, married, two children, to remind her peers of the virtues of difference and love.

Jessica Chastain is not afraid to assert her ambitions. Besides, she’s not afraid of much, neither of Hollywood nor of the press. “I’m not supposed to say it, but when I look at my journey, I feel happy and proud of the work accomplished. In her gaze framed by her flamboyant hair, an almost frightening assurance, softened by a smile and warm benevolence. She may have the physique of the star par excellence, fine, sublime, Jessica Chastain stands out. His strength, which was initially his burden: a career crowned with success late in life, at 34 years old.

Read also: The triumph of “Coda” at the Oscars – Philippe Rousselet: “On stage, it was magical”

In this industry where thirty for an actress means the doors of retirement in the eyes of the producers, – unless their name is Meryl Streep -, the trajectory of Jessica Chastain is atypical. Although she graduated from the most prestigious drama school in the United States, the Juilliard, in New York, in 2003, the actress took a long time to break through. She made films that never came out, such as the invisible “Salomé”, directed by Al Pacino. “The Tree of Life”, by Terrence Malick? The work sleeps for four years in the editing room. Jessica Chastain conceives a legitimate frustration, but does not complain. Coming from a modest background, the native of California says she is happy to be able to pay her rent and get on the boards, she who has chained the plays.

The glory, the real one, finally arises in 2011. By chance of film programming, the cursed actress finds herself on the bill for no less than seven feature films that year. Terrence Malick’s masterpiece wins the Palme d’Or at Cannes. Jessica Chastain runs the festivals, the red carpets, all the ceremonies of the planet, until the consecration, in 2013. This late success gives her the maturity necessary to collect such notoriety. At the Golden Globes, she was crowned best actress for her role as a CIA analyst, icy and intractable, in “Zero Dark Thirty”, by Kathryn Bigelow. On stage, it’s not just her hair that stands out. Rather than lull audiences to sleep with a tirade of thanks, she offers insight into her torturous path to recognition. “I have dreamed of being an actress since I was little. I have been working for a very long time. I auditioned, struggled, struggled and was on the sidelines for years. And receiving this award is a wonderful encouragement. »

Silence and brief polite applause. Wrapped in a sky blue Calvin Klein dress, adorned with Harry Winston jewelry, the actress wanted to highlight the difficulty of the job rather than maintain the illusion of glamour. It’s rare. Will follow an Oscar nomination the same year, his second in two years, after that for his role in “The color of feelings”. “I was convinced that such recognition would never happen again. When “Zero Dark Thirty” came out and a second Oscar nomination fell, I thought maybe I could stop worrying and thinking that my place in Hollywood would constantly be in question. »

A decade later, Jessica Chastain cemented her status. She has acted in 25 films…statistics that seem to plunge her into a kind of vertigo. ” You realize ? The most amazing thing is to see how much the industry has changed. I remember such sexist questions that I was asked at the time. I was stunned by the way Kathryn Bigelow was treated, who didn’t receive the same consideration as male directors. Jessica Chastain has never ceased to criticize the Hollywood system, its lack of diversity, unrealistic female roles. From her first fees, she sought her independence and set up her production company, Freckles Productions, to offer herself beautiful, interesting, powerful, innovative roles. Anything but being a potty.

She worked seven years on the adaptation of the documentary “In the eyes of Tammy Faye”, the story of an ultra-popular televangelist in the 1980s who, with her husband, created three television channels and accumulated up to to 20 million viewers a day. She is an icon of American pop culture that Jessica grew up with. In France, the character is sorely lacking in notoriety, which explains why the film, initially planned in theaters, ended on the Disney+ platform. Whatever, Jessica Chastain has honored her mission: to rewrite the story of this exuberant woman, excessively made up and victim of tax fraud by her husband. She was the laughingstock of the country. Wrongly. “I’m ashamed to admit it, but I, too, as a teenager, judged Tammy Faye. When I discovered the documentary which gave an honest view of his personality, I was shocked. In 1985, Faye had scandalized the audiovisual landscape by receiving with benevolence and love a young pastor suffering from HIV. It was live on his channel, watched by millions of believers. An unprecedented act. “She had refused to obey the rules established by the white men of the religious coalitions. For her, being a Christian meant loving everyone. »

It’s amazing how the industry has changed. I remember the questions so sexist that people dared to ask me

Furiously feminist, Jessica Chastain wants to give women back their visibility. Inspired by the little-known stories of female secret agents that she devoured to prepare “Zero Dark Thirty”, she produced a feature film centered on spies, “355”. Released in January without promotion in France, this action film is worth seeing. In particular thanks to its cast: Chastain surrounded herself with Penélope Cruz, Lupita Nyong’o, Fan Bingbing and Diane Kruger. A certain Tom Cruise came to give his expertise… Despite its shaky staging, “355” fulfills the mission devolved by Ms. Chastain: the actresses hold the film in equal parts. Everything does not work, it’s crazy, but Jessica Chastain has the merit of having gone to the end of her cinematographic desires, without fear of failures or failures.

And she was not wrong: a new rain of nominations fell on her for her interpretation of Tammy Faye. Of which the most prestigious, the Oscar. Which may find its place between the stuffed animals and toys of her two children from her union with Gian Luca Passi de Preposulo, a wealthy Italian nobleman who works in the fashion industry and whom she married. A family life that she wants to preserve. “I’m good at setting boundaries. It’s something that we women have to nurture. As soon as I started to be known, I formulated what made me uncomfortable. That’s why I’ve often been called a mystery actress… But I’m just educating people on how to treat me. »

“In the eyes of Tammy Faye”: a fight Oscar for Jessica Chastain