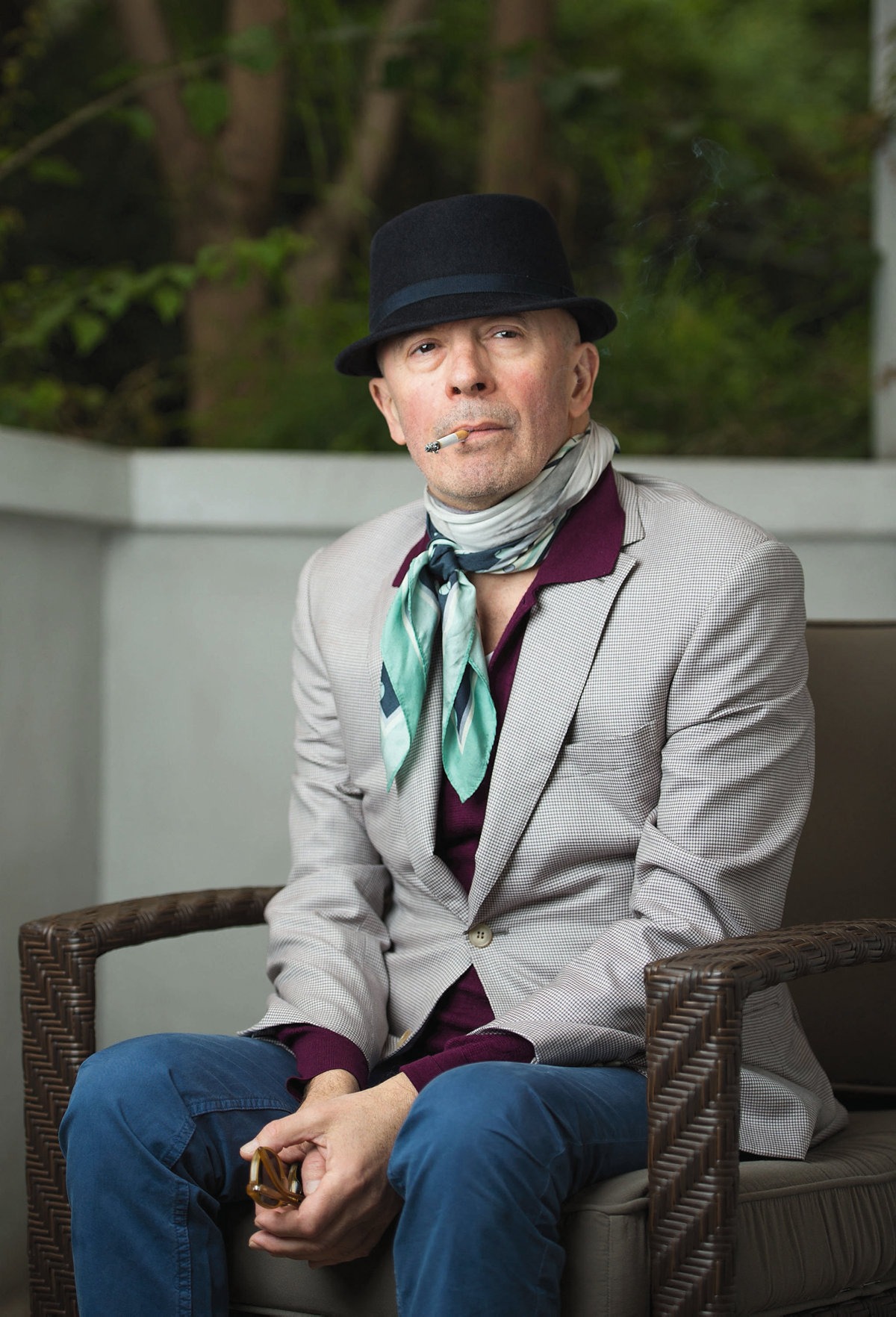 Between the preview tour of his new feature film, “The Olympics” (presented at Cannes in July and released in theaters on November 3), and the preparation of his next film where he will try his hand at the musical, the schedule of Jacques Audiard is very busy. However, he receives us at his home, in a popular district in eastern Paris in the process of gentrification. Not stingy with digressions, he seems to constantly question his own cinematographic practice. Meeting with the director of “Dheepan”, winner of the 2015 Palme d’Or.

What does this title “the Olympiads” evoke?

Jacques Audiard I regretted not having said more in the film. I could have filmed the metro station like Truffaut did. I find this title beautiful. He questions. I love this district of fairly tall towers from the 1970s. It is called the Olympiads in honor of the 1968 Grenoble Winter Games. All the towers bear an Olympic city name such as Antwerp, Osaka. There is the rue d’Oslo, du Javelot, du Discobole. My characters also make love a lot. There is something sporty about it.

What does a singular vision of Paris refer to in the film?

Jacques Audiard It’s pretty deliberate. I lived not far from ten years in the 13th district (that of the Olympiades – Editor’s note). I have been around quite a bit in Paris. And even if I have used the city quite a bit, its photogeny is a bit restricted. It’s not New York, Tokyo or Hong Kong. I got a little bored of this small, narrow, museum, romantic and Haussmannian town, with its six-storey outlook. It tends to be very closed in its historic center. It does not really correspond to the time. The 13the has modern town planning, to which I am very sensitive.

Why did you choose black and white?

Jacques Audiard To reinforce the contrast, the lines, the geometry of what we can see through the windows of the towers. To think that one day we will make a black and white film is part of a filmmaker’s horizon. With black and white, we are not polluted by nuances. The film has changed from its original purpose. There were more sex scenes. Sex in color is difficult.

To what extent do the black, Asian and female protagonists participate in a desire to show a more realistic face of Paris?

Jacques Audiard I don’t know if the 13th I am filming exists. But the fact that a black man and a Chinese woman have a love affair makes sense. This is not the problem with the film. We are not going to continue to sectorize things. I don’t have the feeling that I have made an immensely political film. Rather, it’s the movie of a poor desiring guy. And they are beautiful, shit!

In which cinematographic universe are “the Olympiads” located?

Jacques Audiard It’s a film that comes from “My night at Maud”, on the one hand, and probably from the heroines of Truffaut, on the other. I had wanted for a very long time to make a film on romantic discourse. What is the romantic speech since we went to bed the first night. I saw “My night at Maud’s” when I was 15 years old. I was younger than the protagonists in my film. I was in a state of subjugation. I saw him four times in the week. He taught me what an attractive woman and man are, what charm is, its expression, how seduction will proceed. Afterwards, they don’t make love. In the age of apps, I find it hard to believe that young people don’t.

How do you film the sex scenes after #MeToo?

Jacques Audiard This is the first time that I really broached the subject. It’s quite difficult to apprehend, like violence. These scenes question verisimilitude in cinema. I have the actors work with a choreographer. They make their story with all due honor. When they have things to show me, they do it and they are the ones who stage themselves, give or not what they want. When I get on the set, I just have to record what the actors have prepared.

In short, you give them the key …

Jacques Audiard I give it often. The more you work upstream, the more you give the key to the actors. I had to rehearse for a long time. This had not happened to me since “A Prophet”. There, there was a very important professional difference between Noémie (Merlant), Jehnny (Beth), Makita (Samba) and Lucie (Zhang). Everyone had to rise a little through the rehearsals. Three days before the shooting, I rented the stage at the Théâtre du Rond-Point to shoot the film. They dominated their score more. Sometimes on the set I would give them the keys and things would go quickly.

You left Cannes empty-handed. How do you live it?

Jacques Audiard There is absolutely no disappointment. This selection in this kind of spreading field that was the cinema was important. I was very proud and happy to be there. I’m not expecting anything at all. A palm is unique. It has to stay that way.

Think you’ll never get another one?

Jacques Audiard Maybe I’m immune to not having it, but I really mean it. A palme d’or for a director is what is most beautiful. I hope to be selected again in Cannes, to participate in the big projection with this thing which invades you, to have the heart which stops, the international press. It is a huge, unexpected reward.

In 2018, during the presentation of “Sisters Brothers” at the Venice Film Festival, you were moved by the virtual absence of films directed by women in competition. This year, Julia Ducournau and Audrey Diwan, two French filmmakers, respectively won the Palme d’Or in Cannes and the Golden Lion in Venice…

Jacques Audiard My word has considerable power… I’m a little ashamed to say that. Julia’s movie is absolutely amazing. “Titanium” is something. I haven’t seen Audrey’s movie. But if things change, so much the better. It shouldn’t be something opportunistic or worse, paternalistic. Just because my talented sisters are rightly celebrated does not mean that downstairs it works better. On my team, no problem arises, but I don’t know if it’s the same everywhere. I praise my sisters, but I hope that it is not the tree, or the famous palm, which hides the forest. At the SRF (Society of Film Directors), I can see that things have changed. I come from cinematic territory where I can tell you that thirty years ago it was not that at all. I see things changing. With me, the question does not even arise. But I don’t see much of the diversity of the teams. Where are we with the blacks? I wish the question no longer arises. Before “A Prophet”, I railed against the casting of French cinema, at least not very satisfactory. If we make cinema, it is to show life. When I open the door to my house, it’s not the life I see in the movies. I do “A Prophet” in prison – it’s quite stigmatizing – but we are witnessing the rise of someone. What happened through “A Prophet” and which was one of the objectives of the film is that the actors, Tahar (Rahim), Reda (Kateb), Leïla (Bekhti) stayed. It is very satisfying.

“The Olympics”, the romantic comedy 2.0

It doesn’t quite start at the beginning. Émilie and Camille make love. We attend their meeting later. He’s looking for a roommate. Emilie was expecting a girl. She sees a young man with a mixed first name arrive. She sends him an end of inadmissibility. The smooth talker is embedded and they end up in bed. The body is a living language in “the Olympics”. In another part of the story, we discover Nora, in her thirties who is resuming studies at university. A student night and everything collapses. Poor Nora is mistaken for Amber Sweet, an ex-pornstar turned cam-girl. Harassed, blacklisted, she begins a virtual relationship with the sex worker. There, the two intrigues meet to put Camille and Nora in contact, who have become unlikely colleagues. In an elegant black and white, Jacques Audiard tries his hand at romantic comedy 2.0, against a backdrop of marivaudages where sex often precedes the verb and the real game of seduction. This portrait of a youth in search of itself is carried by a beautiful energy, an inspired staging, amazing actors and a refreshing vision of France and its community, very far from identity fantasies.

Jacques Audiard: “I have long railed against the casting of French cinema”