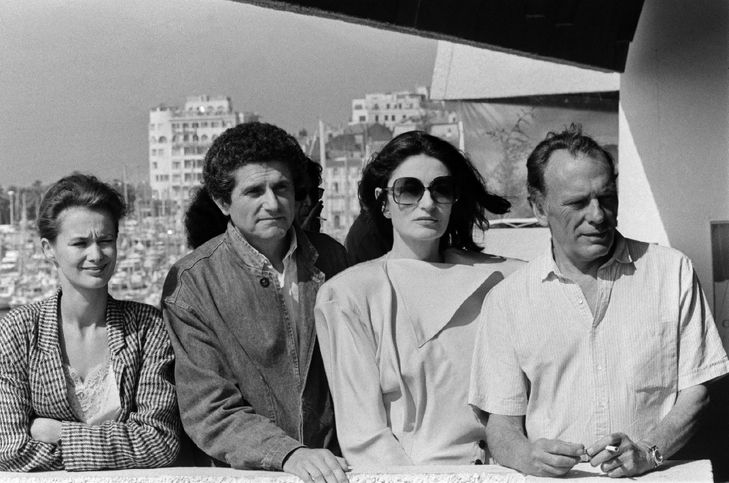 Here are five of the most striking films by actor Jean-Louis Trintignant, who starred in some 120 feature films.

The film propels two beginners, Brigitte Bardot and Jean-Louis Trintignant, to the rank of stars. It is the director, Roger Vadim, married to “BB” for three years, who organizes the meeting between the two actors. “He’s tart!” she says of Trintignant who, in the film, is to play the role of a suitor who ends up marrying the actress. “She was a little bitch,” he said of her. But his shyness touches Bardot. They become lovers. The actor becomes possessive, no longer supporting to leave her at the end of the day. Their story will not last. “BB” will say: “I loved Jean Lou madly (…). My moments of love with Trintignant were the happiest of my life”.

Jean-Louis Trintignant (from L to L) Anouk Aimee, Claude Lelouch and his wife Marie-Sophie L in Cannes on May 12, 1986 / AFP/Archives

The film by Claude Lelouch, then 28 years old, won a Palme d’Or and two Oscars in 1966. A car racer whose wife has committed suicide meets a script-girl in Deauville who has been inconsolable since the death of her husband. Fifty years later, seeing this cult film again, Jean-Louis Trintignant told Paris Match: “We don’t feel the effort it asked of us, the lack of resources. I think it’s a sublime film. It by the grace, what… When I shot it, I already had around thirty feature films behind me. And there, for the first time, I felt good on set. Something magical happened. is triggered”.

This film marks the first collaboration between Lelouch and Trintignant. In 2019, the director sealed their reunion in “The most beautiful years of a life”, the testament film of “A man and a woman” where he reunited Trintignant and Anouk Aimée.

In this political thriller, an “embarrassing” elected official dies, the victim of a road accident in an unidentified country. But a young investigating judge will demonstrate that “Z” was the victim of a political attack, orchestrated by the police themselves. Endowed with a natural authority, Jean-Louis Trintignant interprets, without raising his voice, this magistrate struggling with the beginnings of fascism that the Greek director Costa Gavras seeks to denounce. “We always say that actors should not do politics. But we have to do it, we do too little”, explains the actor at the release of the indictment film. “I am delighted to engage in a political film”.

To escape dark impulses and a tragedy that occurred in his childhood, Marcello Clerici takes refuge in conformity and adheres to the Italian fascist regime of the 1930s. His quest for normality will lead him to agree to assassinate a political opponent who has taken refuge in Paris. . “Certainly the most beautiful film in which I participated,” said Jean-Louis Trintignant at the time.

With “Amour” by Michael Haneke, Jean-Louis Trintignant makes his big comeback to the cinema after ten years of absence. After the tragic death of his daughter in 2003, he agrees to come back “for the last time” on the screens because he admires the Austrian director.

In “Amour”, Palme d’or in 2012, he forms with Emmanuelle Riva a couple of music-loving octogenarians confronted with the decline of one of the two. At 81, he embodies a feverish and watchful husband. “It’s one of the films that counted the most in my career as an actor,” he confided.

Jean-Louis Trintignant, a monument of cinema in five films