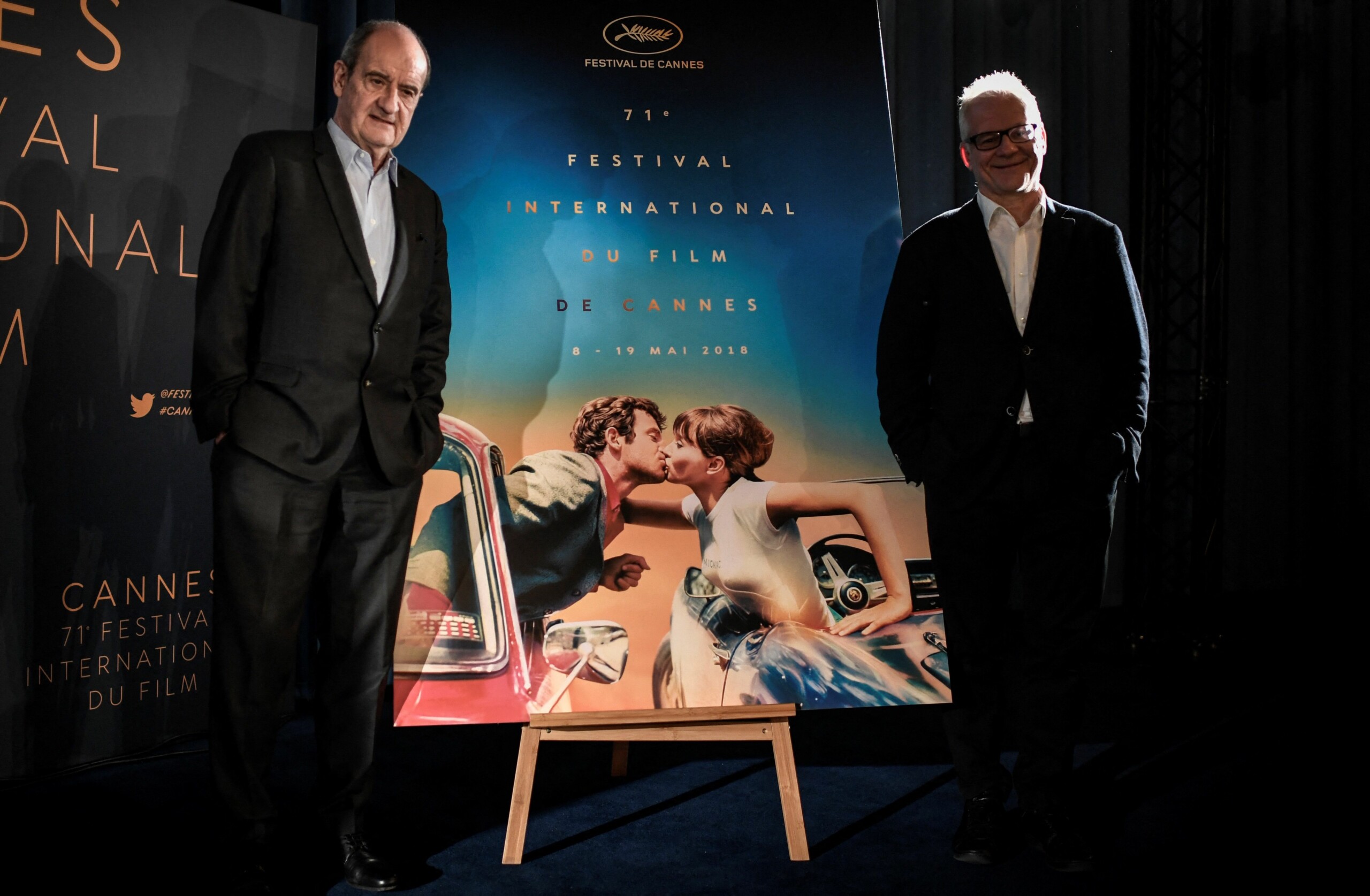 The filmmaker, one of the leading figures of the New Wave, died at the age of 91. “Breathless”, May 68, “Save who can”, the cream pie: relive these memorable moments at the Cannes Film Festival with whom he had a story tinged with love and hate.

Jean-Luc Godard, to whom we owe in particular Breathless, Contempt or Pierrot le fou, died at the age of 91, we learned on Tuesday, September 13, reports Reuters according to information published in the newspaper Release. With this monster of the 7th art flies away a whole section of French cinema.

After the disappearance of François Truffaut, Jacques Rivette, Claude Chabrol, Éric Rohmer, Jean-Luc Godard was one of the last great figures of the New Wave. Like them, he started as film critic in the 1950s before going behind the camera in 1954 with Concrete operationa short Swiss documentary on the construction of the Grande-Dixence dam.

Five years later, he signs Breathlessiconic film of the New Wave which reveals Jean-Paul Belmondo, in the role of a thug, and Jean Seberg, a young American student with whom he falls in love. In this work, the music, which becomes one with the noises of the street, offers a discourse parallel to that brought by the image. With this soundtrack and this double narration, Godard shakes up and reinvents the codes of cinematographic writing of the time.

“Out of breath”, a first disappointment

Like the greatest love stories, his story with Cannes begins on a discord. We are in 1960. In the cinema, the concept of New Wave, carried in particular by François Truffaut and Jean-Luc Godard, is still vague. The young Franco-Swiss director arrives at Cannes with his first feature film Breathless. The film, which reveals Jean-Paul Belmondo, met with resounding public success and officially laid the foundations of the New Wave school.

However, the Cannes Film Festival will not give him a place in the official selection. The legendary story of Michel and Patricia will be screened in a small room on rue d’Antibes. Asked by journalist François Chalais about his absence from the selection, Godard will answer: “It would have made me happy to be selected but because it would have made me a room in the eye”. Without suspecting that 58 eight years later, his film will be honored by the Festival which will draw the poster for its 71st edition.

The protest fever affects the Cannes Film Festival in May 68 like the whole of France. While the country is on strike, Jean-Luc Godard, Roman Polanski, François Truffaut and Louis Malle lead passionate debates, locked up in the Palais des Festivals, to answer the question: should the festival be stopped? Alongside François Truffaut, Godard took the lead in the revolt to demand an end to competition in solidarity with the student and worker movement. “I’m talking to you about solidarity with students and workers, and you’re talking to me about traveling shots and close-ups!”howls Godard while installed in the Palais des Festivals in order to prevent the projection of minted peppermint by Carlos Saura, an accomplice director who will cling to the curtains of the room in order to hinder the distribution of his own film.

“They dispatched, among others, to cause trouble and stop the competition, Jean-Luc Godard who, always true to himself, demonstrates that an anarchist Helvetian can sometimes be more sectarian and even more fanatical than a defrocked monk”can we read in the moral account of the 1968 Cannes Film Festival written by Robert Favre Le Bret, then director of the festival. On May 19, the festival will finally be canceled.

In the 1970s, and after several suicide attempts, Jean-Luc Godard settled in Grenoble. The man then discovered a passion for video. In 1980, the filmmaker made his big comeback in commercial cinema with Save who can (life), which screens it in official competition at Cannes.

Godard’s camera focuses on three characters crushed by society. On the one hand, Denise Rimbaud (Nathalie Baye) leaves Paul Godard (Jacques Dutronc) with whom she works on TV. She decides to leave the city to take care of animals in the countryside. Paul is stuck between his ex-wife and his daughter in town, and his ex-partner who has left to live in the mountains. Isabelle Rivière (Isabelle Huppert) is a prostitute who has come from the countryside to settle in town.

Constantly wavering between rupture and departure, the three characters do not have much in common and yet the threads drawn by each of the characters end up binding them. If Jean-Luc Godard wins his first nomination in official competition with this feature film, Run for your life will not be enough to convince the jury for the Palme d’Or.

After Passionthe director tried his luck again on the Croisette in 1985 with Detective, a film with a five-star cast in which we find Johnny Hallyday in particular. As he goes to his own screening, Noël Godin jumps up and throws a cream pie in his face. The reason ? The Belgian entarteur, considered an anarcho-humorous agitator, used to attack different personalities whose image he wanted to somehow desacralize. He was also reportedly motivated by the film I salute you marie which he considers to be an apology for the Church.

Jean-Luc Godard, far from being annoyed, will lick his fingers and see this incident as “a reminder to silent cinema”. He will refuse to file a complaint and will go so far as to convince the management to lift the life ban from the Cannes Film Festival against the Belgian joker.

In 2004, Jean-Luc Godard returned to the Côte d’Azur to present out of competition Our music. With 28,700 admissions, this latest creation met with very little success at the time. The Franco-Swiss will not return there, even when his film Farewell to language was presented in the official selection in 2014.

Four years later, the spotlight is once again on Godard, who is still absent from the red carpet. While he is in the official selection with The picture bookhe deigns to participate in a remote press conference recorded through the FaceTime application. A “special” Palme d’Or will be awarded to him for this film.

A particularly symbolic nomination and reward, 50 years after the interrupted Festival of May 1968. “JLG” will also have the honor of the poster for this 71st Cannes Film Festival, with a kiss between Jean-Paul Belmondo and Anna Karina in Pierrot le fou, his cult film from 1965.

Asked about the death in 2014 by Swiss television RTS, the filmmaker declared himself “not anxious to continue at all costs”, and said he was ready to resort to assisted suicide, which is possible in Switzerland, if he was “too sick”.

“And Godard created Contempt and it was out of breath that he joined the firmament of the last great star creators…”, poetically tweeted Brigitte Bardot this Tuesday, September 13. Her tweet is accompanied by a photo taken from the filming of Le Mépris, in which she plays one of her greatest roles.

“Godard takes with him a certain golden age of French cinema, that of the New Wave which sublimated Bardot, Karina, Belmondo. Among his masterpieces: out of breath” writes David Lisnard, Mayor of Cannes.

“Jean-Luc Godard is the Picasso of cinema. With his intuitions and his flashes. Ahead of his time, he played with words, images, sounds, colors. He improvised milestone films, obscure and seductive. .World cinema is an orphan”, reacted the former president of the Cannes Film Festival Gilles Jacob on his Twitter account.

Jean-Luc Godard died at the age of 91: a regular at the Cannes Film Festival