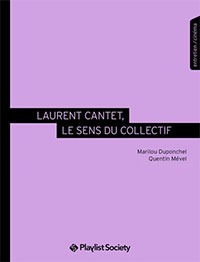 
Small but plentiful, small but serious, such could be the motto of this small work that offers us Marilou Duponchel and Quentin Mevel published by Playlist Society. A book which almost fits in your pocket, which does not cost very much, 8 euros, and which teaches us a lot about Laurent Cantet.

Many people discovered Laurent Cantet in 2008 when he received from the hands of Sean Penn the Palme d’Or at Cannes for his film Between the walls, which follows the daily life of a 4th grade class in a ZEP-classified college in Paris. A film, adapted from a novel by Francois Begaudeau in which the filmmaker observed the relationships within a group and the circulation of speech, in a joyful and complex way.

When we look at the work of Laurent Cantet and when we read this work which consists of an introductory essay by Marilou Dupontel and an interview between Quentin Mével and the filmmaker, we realize that Laurent’s films Cantet address burning political and social issues that give it a central place in French cinema.

The actors and actresses of his films always have a special place in his films, he films them together and thus develops a precise and sensitive dialectic between individuals and groups. The interview is built around the filmmaker’s eleven films, in chronological order from All at the demo in 1994 until Arthur Rambo released in 2021.

We see how he observes society straight in the eye, without giving lessons, offering keys to understanding the modern world in all its complexity. He comes back to the fact that the director is used to placing his characters in closed places, a cafe, a classroom, an island, to better observe the mechanisms of operation. Youth also occupies a central place in Cantet’s work. Marilou Dupontel’s short essay is really very enlightening on the work of this filmmaker, on the genesis of his films and on his intentions.

The interview is no less interesting because it allows us to better understand the director, to see why he often favors non-professionals to play characters in his films.

Obviously, to better appreciate the proposed interview, it is wise to have seen the films that are the common thread of the interview, which is not my case for all the director’s films. I take care to read the interviews of the films that I have seen and I intend to go watch the others to be able to appreciate even more the exchanges concerning the unseen films. To me, The timetable but also Foxfire are excellent films that it is interesting to better understand through the explanations that Laurent Cantet gives us about their creations.

So here it is, fans of Laurent Cantet will find their happiness without difficulty in reading this accessible and complete work on the work of this director. The others will be able to enter his work through an original door, by discovering some of his films, as was my case since I watched Human ressources after reading the book with great pleasure. I know that I still have a few Laurent Cantet films left to watch and this book will already have the great quality of having made me want to see them. This is surely the success of this book.

Laurent Cantet, the sense of the collective