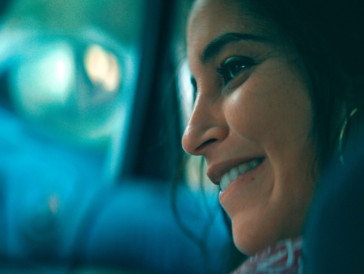 Once again, Joachim Lafosse interferes in family life. After divorce (“The economy of the couple”, 2016) and infanticide (“To lose reason”, 2012) it is bipolarity that is at the heart of intimacy. Without sentimentality, the camera follows the journey of a couple between relapses and hope.

Leïla Bekhti in “Les Intranquilles”
© Outside the Box

(A text by Fanny Agostino.)

Leila (Leila Bekhti) and Damian (Damien Bonnard) are the essence of the bohemian couple. Both work in the world of art. She restores furniture while her husband paints canvases in his studio. Their house, located in the south of France, is the very cliché of an artist’s house. A tailor-made life, out of time. A balance called into question during seaside holidays. Damien no longer sleeps. He becomes hyperactive. During a boat trip, he abandons his ten-year-old son in the open sea, then returns to swim a few hours later. Other strange behaviors occur. His wife ends up worrying. At the hospital, the verdict falls: Damien is bipolar.

The last decade has given a large place to the representation of the disease in the cinema. Two frameworks seem to be emerging. The first gives pride of place to the defects of old age. Emblematic of this movement, “Amour” (2012) by Michael Haneke awarded the Palme d’Or. Most recently, the stunning adaptation of the play “The Fathers” (2020). Finally, even the decried Gaspard Noe got into it (“Vortex”, 2022). But this trend cannot exempt the place from other pathologies. One thinks of “120 beats per minute” (2017) which retraces the journey of activists against the wave of AIDS in the 1990s or even “War is declared” (2011) in which Valerie Donzelli recounts her experience as a combative mother facing her child’s cancer. “Les Intranquilles” therefore fits into this second selection. About mental illness, Joachim Lafosse avoids the trap of an internalized staging of personality disorders. Witness to the events, the camera is within the family nucleus. This privileged point of view makes it possible to explain the insidious reality of the tare. The slightest deviation from Damien becomes suspicious. Does he respect his treatment? Is he sufficiently vigilant to apprehend his beginnings of crises?

Everything is carried by a Leila Bekhti unrecognizable, becoming more and more detached from his first big role in “All that glitters” (2010). Freshness and lightness give way to more complex and dramatic characters, as in the 2016 Goncourt Prize-winning adaptation “Chanson douce” (2019). In “Les Intranquilles” Leïla must stand up. Leading her family at arm’s length, she undergoes the different cycles imposed by the disease. Dementia follows the fall and then hospital stays. Her husband returns, goes through a depressive passage. The pattern starts over. Exhaustion sets in. At his fingertips, the cigarette quivers. Benevolence turns into obsession. We must reassure Amine (Gabriel Merz Chammah), his son. But more often than not, it’s to lie to him. The task is exhausting, especially since the cure hoped for by Leïla does not happen. Heard at the beginning of the film when the couple were still happy, the words chanted by Bernard Lavilliers andCatherine Ringier on the title “Dark Ideas” resound: “I want to run away, I want to leave, I want love, pleasure. Madness, desire, I want to cry and I want to laugh.

Damien Bonnard in “Les Intranquilles”
© Outside the Box

Without yielding to the facilities in which the representation of madness engages, Joachim Lafosse continues its family investigations. The gaze he poses on bipolarity is not so much that of the patient’s unexplained — the scenes of creative frenzies that trigger crises are filmed in close shots on Damien’s ecstatic face — as that of the disintegration of a submissive couple to the vagaries of the disease. Nothing is under control when one becomes addicted to Damien’s mood swings. The final part of the film partly solves the equation that Leïla asks herself: can you be cured of a personality disorder or do you have to live with the uncertainty of its spectrum?

Since May 11 at the cinema