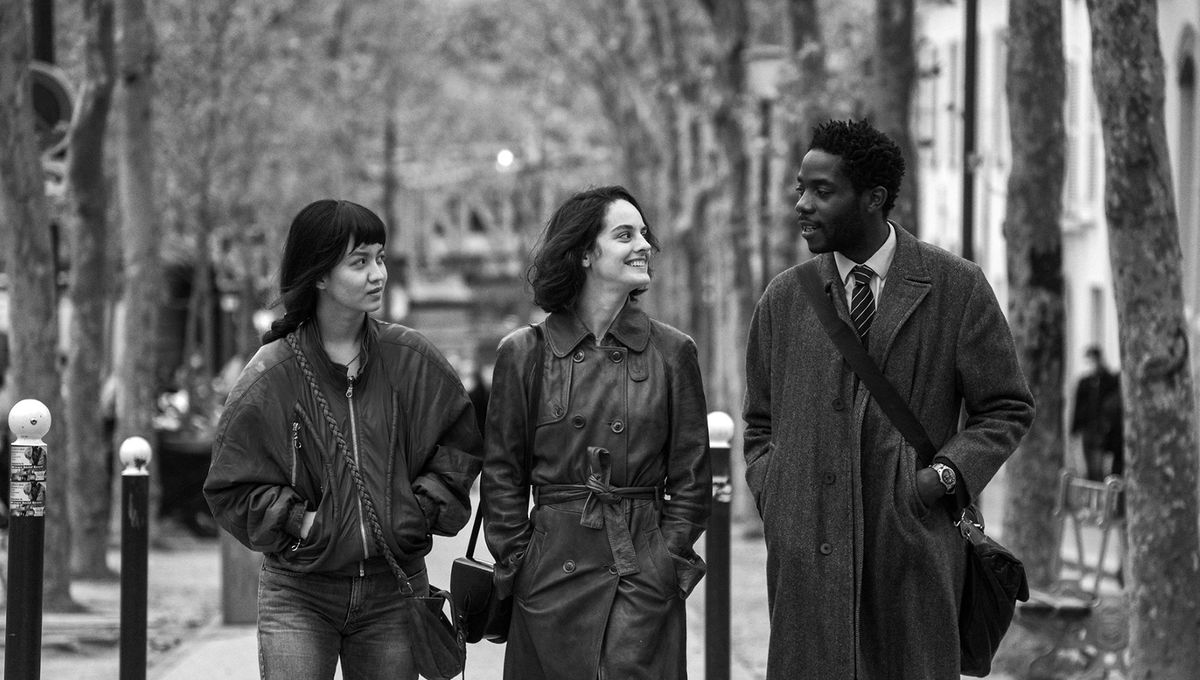 The Palme d’Or 2015 signs a biting comedy that plunges us into the 13th arrondissement of Paris filmed in black and white, in the Olympiades district. Jacques Audiard draws up the crossed destiny of four young people, synonymous with a generation in full disenchantment. The film is praised by Le Masque & la Plume!

The film presented by Jérôme Garcin

Presented in the official selection at the last Cannes Film Festival, a black and white film with a very brief color scene lasting a few seconds, inspired by the comic strip “The Intruders” by New Yorker cartoonist Adrian Tomine. We are in the Parisian district of Olympiades. A film co-scripted by Céline Sciamma.

It all starts with the torrid relationship between Emilie (Lucie Zhang), a telephone consultant of Asian origin, and her roommate Camille (Makita Samba), who is black and a teacher and who “compensates for her professional frustration with intense sexual activity”. Camille will then convert into real estate where he falls for his assistant from Bordeaux, Nora (Noémie Merlant) who, after many setbacks, will fall for Amber Sweet (Jehnny Beth) an online sex worker. Une Rome com, a trashy romantic comedy about polyamory and sexual diversity that lasts 1h46.

EN: “Initially, there was a misunderstanding on my part about the title because I thought that the Olympiades was the name of these retirement homes… In reality, I confused it with Les Hespérides… In the Olympiades, it’s exactly the opposite, there are only young people who live in these buildings. It’s a bit like a film like “The Last Tango” by Bernardo Bertolucci (1972) on the real estate crisis in Paris, where we see that people are ready for anything, even sleeping together to get an apartment, share it, and pay less rent.

In this film, the melting pot works. There is a black, an Asian and even a Bordelaise. The skin color does not intervene at all in the plot, as well as the diversity of professions.

Everything is mixed with a fluidity and a rather confusing sweetness in this film.

The black-and-white film manages to make this neighborhood almost as pretty as Woody Allen’s Manhattan.

It’s a funny object and you learn a lot of things”.

It’s like Rohmer except if he saw the sex scenes and heard the dialogue, he would turn red like a tomato

Eva Bettan applauds “a film that flows from source”

EV: “The film seems to have a busy schedule. The mix; the harassment; the love priced on the Internet; a love relationship between two women… And yet it manages not to make a film-program.

He carries this subject with grace. Everything flows naturally, it’s very successful

Indeed, the question of people from different cultures does not arise, it is not a subject. It comes after all the speeches and political movements that have been held on the subject without it being highlighted.

XL: “I hadn’t been a big fan of the film at Cannes, but I may have missed it the first time I saw it because seeing it for the second time, I find that it’s not an uninteresting movie.

It is the encounter between a screenwriter who has written marvelously for women, and a director who films men very well. On this ground of rivalries where nothing is acquired, both work very energetically, with an extremely interesting interaction in the dialogues, in the proposed situations, in the way that the characters cross the frame, cross, uncross, meet.

Audiard’s staging – to which I am not always sensitive – manages to create a kind of urban sensuality through the way the setting functions as a way of protecting the film’s protagonists.

It is extremely thin and delicate

Even if I find that it does not say much and that I do not know very well what to cling to. The topics are a bit generic and boilerplate.”

Pierre Murat “struck by the elegance of the staging”

PM: “Each shot lasts exactly the time it takes. It constantly slips. Technically, there are connections in the axis which are of great elegant fluidity.

We know that one of Jacques Audiard’s favorite films is Éric Rohmer’s “My Night at Maud’s” (1969) where we talked a lot, but where we didn’t make love. While here it is the opposite!

But, oddly, I had the impression of a filmmaker who watched with great tenderness and astonishment a generation that was totally foreign to him. He looks at these people as people who are a bit far from him and from the cinema he loves”.

SA: “It’s a joyful model of inclusive film. It’s all there. He takes pleasure in playing with the rules of diversity that he sets for himself (any sexual orientation, any skin color, the ghost of disability, etc.).

He films people who don’t know each other very well but who learn to love themselves, learn from others who they really are and learn what love is. It is very beautiful

🎧 Listen to all the reviews exchanged about this film on the set of the Mask and Feather :

“The Olympics” by Jacques Audiard

“Les Olympiades” by Jacques Audiard: “an elegant, inclusive film that flows naturally” according to Le Masque