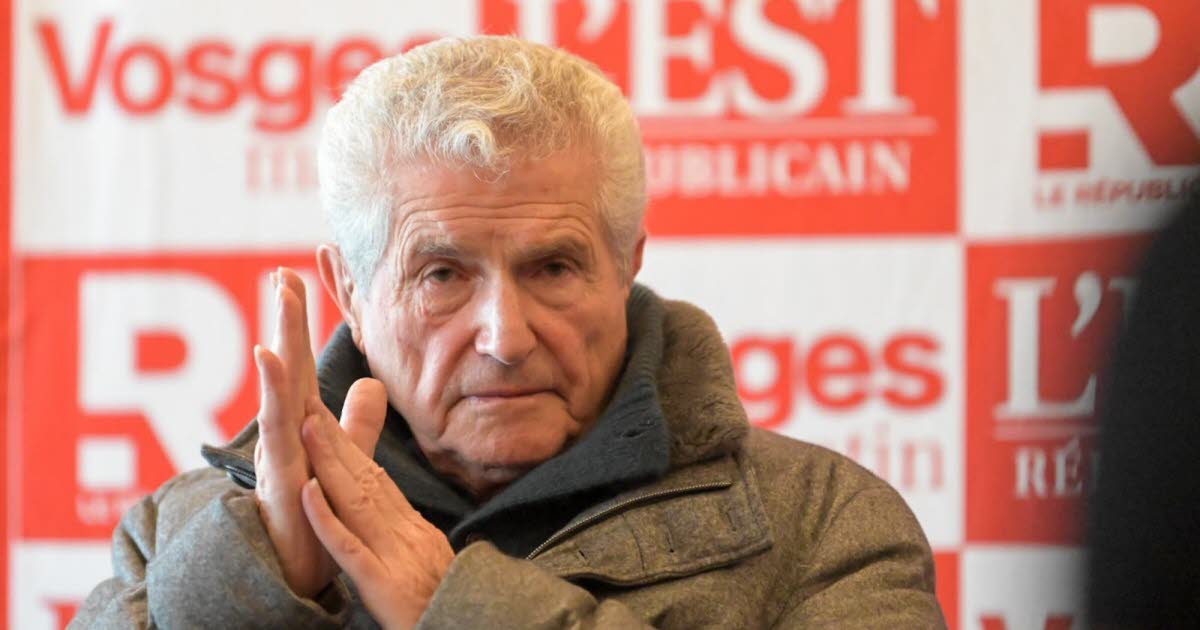 Edwige Claudel, from Saint-Amé, asks Claude Lelouch if he would like to shoot a film in the Vosges.

“Why not, choosing sets is like choosing an actor. We can shoot anywhere in France, this country is a masterpiece. My wife is from this region, she often told me that she had to make me discover the Vosges. I came to the Vosges to preside over the Gérardmer International Fantastic Film Festival (in 2016, editor’s note) and I have excellent memories of it.

Julien Fouray, from Épinal, wonders where the title of the documentary film “Tourner pour vivre” comes from.

Philippe Azoulay, director of the documentary film: “For personal reasons, the sky had fallen on my head before this adventure, I was in a state of mind where the only thing that still motivated me was this passion for the cinema. I was looking for a title for the film. With Claude, we share this same appetite for life. Cinema, for us, is the alpha and omega of our lives. For me, “Shooting to Live” was so much about him and that’s what the film is trying to tell. It is this passion pegged to the body. »

10 a.m. – Claude Lelouch and his relationship with new technologies

“I had the chance to start in the cinema with heavy, complicated cameras. Today, there are portables, they are the most beautiful cameras in the world. Cinema is an art of new technology. Each time cinema has invented techniques, there have been new waves,” says Claude Lelouch.

“We are all filmmakers, today 7 billion people film. The cinema is in the process of modifying its writing in an incredible way. Cinema has not said its last word. Today, the mobile phone image is closer to the human eye than professional cameras,” he adds.

According to Claude Lelouch, “we will quickly arrive at cinema in relief, without the glasses”.

9:50 a.m. – The documentary “Thirteen Days in France” and its relationship to music

Anne Dolmaire, from Gerbépal, has a question about the documentary “Tourner pour vivre”, in which Claude Lelouch says that he is a “reporter of life”: “A friend took care of the Gérardmer ski jump, this which allowed him to pass on his passion to young athletes who went to the Olympics. We feel an athlete in you and it shows in the documentary. In “Thirteen days in France” (on the Olympics in Grenoble, editor’s note), how and why did you film the cry of the jumper as he took off from the springboard table in this documentary?

“I had a lot of fun making the documentary ‘Three Days in France’, because I love sport. All my love stories are filmed as competitions. The cry these men utter impressed me. It was the composer Francis Lai who captured it,” replies Claude Lelouch.

“Claude Lelouch is one of those filmmakers who has a visual signature, like many, but also sound. Few have a sound signature,” adds Philippe Azoulay.

For Claude Lelouch, “music is the language of God”. “For me, music brings out the best in each of us. »

Gérard Foinant, from Gérardmer, has a question about the work of Claude Lelouch: “When you make a film, what act gives you the most happiness? »

“It’s filming, because it’s the holidays. All the elements are there, there are more uncertainties. There is the film we dream of, the one we write, the one we shoot and the one we edit, that makes four films. Shooting is jubilation, it’s like the match, we play, it’s the playground. We are all together, with the technical team, the actors, the weather… all the elements are there for the game to take place, ”says Claude Lelouch.

“Filming is a hassle race in wonderland. We are 300% with what we like, what we hate… Editing is like in a trial, the verdict. It’s terrible because that’s where you see if it works or not,” he adds.

Regarding the release of a film, Claude Lelouch admits that “it’s a nightmare”. “I consider myself an amateur filmmaker. I make films that I want to see, so I enjoy myself. I don’t tell myself that I’m making a film for the public. »

“I never took a vacation, the first was during confinement. I need to do things, if you don’t take it on vacation with you, you’ll have a bad vacation, because I’m constantly on the move! I love life and life loves me. »

His love of life, Claude Lelouch tries to film him. “By observing the world, we realize that all disasters are positive at some point”, notes the director. “The day when we are aware that evil will do us good, we consider life as something essential. I learned more from my failures than from my successes. Failure is the most beautiful school in the world. »

9:30 a.m. – Claude Lelouch talks about the film “Bastard, we love you”, with Johnny Hallyday

Denis Jenneson, from Lironville (54) asks a question about the film “Bastard, we love you”. He asks Claude Lelouch why the film did not meet with success in theaters.

“The film did not go very well at first because the character played by Johnny Hallyday dies in the film. As time passed, it became a success. Today the film is considered Johnny’s most interesting. The subject of the film is the story of an artist who has devoted more time to his profession than to his family. It’s a bit my case, ”says Claude Lelouch.

Claude Lelouch reveals that originally, Alain Delon was to play the role of Johnny Hallyday. “I live a great love story with cinema, which is made up of ups and downs. If I had been told that I would make 50 films, I would never have believed it”, adds the director.

“Chance and coincidence. I hadn’t planned to make this film, for personal reasons I had to go to India. The death of a member of my family led me to call people he knew. So I called Claude, who told me to come and meet him. Claude was coming out of several films which were not successful, he wanted to make his last film, which would be one of his best”, explains Philippe Azoulay.

“He wanted to make three films in three years. He places a challenge on his shoulders. For me, it was necessary to tell this process of creation. I offered to follow him on the shoots, on the condition that he give me carte blanche. Finally, these three years turned into eight years of filming, ”he adds.

Claude Lelouch and Philippe Azoulay, the director of the documentary “Tourner pour vivre”, arrived at the restaurant of the Joa de Gérardmer casino, where our readers meet.

On the initiative of Vosges Matin, L’Est Républicain and Le Républicain Lorrain, six readers will be able to ask their questions to Claude Lelouch, as well as to Philippe Azoulay, director of the documentary film “Tourner pour vivre”, devoted to the director of the films “A man and a woman”, “Les Miserables” or even “Love is better than life”.

The documentary will be released in theaters on May 11. Philippe Azoulay accompanied him for seven years, it’s a very long-term film. The result is an incredible and unprecedented journey into the world of Claude Lelouch. Philippe Azoulay followed him on three shoots, including one in India (“Un plus une”). The film allows you to discover Claude Lelouch according to different aspects.

Once again this year, the Rencontres du Cinéma de Gérardmer welcomes beautiful people. The event, which has not taken place for two years due to the Covid-19 pandemic, allows many operators to meet and meet their partners: distributors, institutions and service providers.

Among the guests, Claude Lelouch, who has more than fifty films to his credit. “A man and a woman”, “One and the other”, “Itinerary of a spoiled child”, “Adventure is adventure” or even “One plus one” to name but a few. -ones.

The director is currently in Gérardmer alongside director Philippe Azoulay, who has dedicated a documentary to him entitled “Tourner pour vivre”. The opportunity to discover behind the scenes of some shootings of Claude Lelouch, his confidences, his memories… several actors with whom he has shot also testify.

The trailer for the film “Tourner pour vivre”, by Philippe Azoulay, dedicated to director Claude Lelouch.

This content is blocked because you did not accept trackers.

Clicking on ” I accept “the tracers will be deposited and you will be able to view the contents .

Clicking on “I accept all trackers”you authorize deposits of tracers for the storage of your data on our sites and applications for the purposes of personalization and advertising targeting.

You retain the option to withdraw your consent at any time.
Manage my choices

With fifty films to his credit, Claude Lelouch is one of the most prolific directors of French cinema. During his career, he notably won two Oscars for “A man and a woman” with Jean-Louis Trintignant and Anouk Aimée (best original screenplay and best foreign film). We can also mention his two Golden Globes for best foreign film for “A man and a woman”, but also “Les Miserables”. In 1966, he received the Palme d’Or for “A Man and a Woman” forever.

This content is blocked because you did not accept trackers.

Clicking on ” I accept “the tracers will be deposited and you will be able to view the contents .

Clicking on “I accept all trackers”you authorize deposits of tracers for the storage of your data on our sites and applications for the purposes of personalization and advertising targeting.

You retain the option to withdraw your consent at any time.
Manage my choices

Live. Vosges: live the meeting between the director Claude Lelouch and our readers in Gérardmer