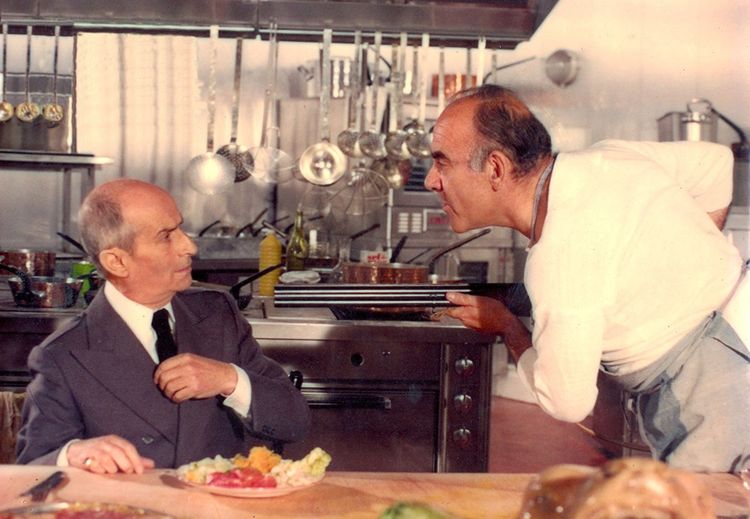 A luxury cruise and a skewer of new rich infrequently: mobsters, arms dealers, exasperating upstarts who frolic in the middle of the fashion. One evening, at the end of the “captain’s dinner” where neither the caviar nor the champagne was skimped, these undrinkable protagonists experience a Dantesque storm. Brinquebalés on their yacht, they suffer from spectacular indigestion, display a greenish complexion and wade through vomit…

Not happy to have won the second Palme d’or of his career after The Square in 2017, with already a meal scene, ubiquitous, Swedish Ruben Ostlund caused a historic laugh this year at the Cannes Film Festival – an institution little known for its frivolity. In Without filter, during a memorable half-hour scene, the unleashed filmmaker does not exactly go with the back of the spoon and shows his pathetic characters in all their lamentable states. In its kind, a tasty show.

“The wing or the thigh”, Claude Zidi (1976): gastronomy in disarray

In the heart of the 1970s, Claude Zidi, ahead of his time, gets carried away with junk food in this comedy where the troublemaker Louis de Funès plays Charles Duchemin, the director of a renowned gastronomic guide. In a particularly tense scene, the latter is taken hostage by a cook who is unhappy at having lost his stars.

The degraded cook forces the unfortunate Duchemin to taste the “shit” (sic) concocted by the spawn of industrial catering: infamous snails, smelly oysters, repulsive sauerkraut, filthy pot hen. “All that food is disgusting, isn’t it?” » asks the kidnapper. Asking the question – known refrain – is already answering it.

“Vincent, François, Paul and the others”, Claude Sautet (1974): a lamb that goes badly

They have been friends for decades and meet on weekends in the countryside to share special moments. Privileged? Not so sure… That day, as he carefully cuts up the traditional Sunday lamb, François (Michel Piccoli), the doctor who has been so successful in his professional life, comes under half-mock half-acid criticism from his comrades who reproach him for having betrayed his youthful ideals, he who once worked in a dispensary now officiates in “a clinic near the Place de l’Etoile”.

By dint of taking the blows, François rebels and begins to scream: “I’m not going to hear bullshit all my life. Receive stupid lessons until the end of time. Fuck you all with your Sundays and your bullshit lambs. » And to leave the room, leaving his friends and the leg in the lurch. In Vincent, François, Paul and the othersone of his monuments, Claude Sautet, the great chef in the kitchen, paints the portrait of 50-year-olds at the end of their rope and, by the way, films one of the most spicy meal scenes in the history of French cinema.

Michel Piccoli definitely had a knack, if we may say so, for filming in films where food obsessed minds and bodies. Accompanied by three other great actors – Marcello Mastroianni, Philippe Noiret and Ugo Tognazzi – Piccoli gives the best of himself in this transgressive farce by Marco Ferreri where four wealthy notables, sexually obsessed and depressed, decide to commit suicide by overdose of food.

In this provocative film which fires red balls at consumerism and the mores of a certain deliquescent bourgeoisie, the unhealthy quartet, in a few unappetizing scenes, gorge themselves (among other things) on hundreds of oysters and a dish of offal composed like the dome of Saint-Pierre. Feastdescribed by its author as “a physiological farce”gave rise to a huge controversy when it was presented at the Cannes Film Festival in 1973, some critics denouncing “an obscene and scatological film, with a complacency to make you vomit”others addressing the actors: “Shame on those who agreed to wallow in snouts in such mud. » Vibe…

People are starving in the Yukon of 1896 and the unfortunate gold diggers are reduced to cooking… their shoes to escape starvation. In 1925, the incomparable Charlie Chaplin filmed one of the most famous, funny and pathetic meal scenes in history in The gold Rush when his character crying famine prepares as if it were a delicacy the old shoe which hitherto covered his right foot. After simmering his pump over low heat, he then tastes it with apparent impassiveness, swallowing the laces like spaghetti and sucking the nails of his grole like tasty chicken bones. The end of beans in a way.

A dark story of revenge and the portrait of a toxic man who traumatizes those around him… In this masterpiece of darkness, Claude Chabrol, the French filmmaker most attracted to the pleasures of the table, cooks up an anthology scene when the detestable Paul Decourt, alias Jean Yanne, reigns terror during a meal where the guests undergo his odious moods. The fatal hero notably berates his wife about the main course.

“Well, this stew is just gross! The sauce is fleet. Why didn’t you have it reduced? I’ve already told you twenty times: when the meat is cooked, you keep it warm. And the sauce, you reduce it separately. » One year later let the beast dieClaude Chabrol will find Jean Yanne for another bloody film: the aptly named… The butcher.

The Agnès Jaoui/Jean-Pierre Bacri duo have always liked to use culinary arguments to describe the ridiculousness of their characters. After the very greedy Kitchen and outbuildingsin 1993 the duo did it again in A family resemblance, a play adapted for the cinema in 1996 by Cédric Klapisch. During a ritual family reunion which is held like every Friday at the quiet dadthe bistro run by the eldest son, the gastronomic meeting turns into a rout.

This gives the irascible Henri (Jean-Pierre Bacri) the opportunity to utter a historical rant and poor Yolande, alias Yoyo (Catherine Frot), whose birthday we are supposed to celebrate, to ridicule herself by opening her gifts and mistaking the dog collar given to her by her husband for a dog collar. “It’s far too luxurious for a dog”, she said in tears. Cruel feast.

London, XIXe century. To satisfy his insatiable desire for revenge, Sweeney Todd (Johnny Depp), a mysterious barber who is above all a bulimic serial killer, murders his clients with his razor while his accomplice, Mrs. Lovett (Helana Bonham Carter), a baker by trade, disposes of bodies by using the flesh of the deceased to garnish her meat pies. With this adaptation of a musical comedy by Stephen Sondheim and Hugh Wheeler, Tim Burton, three years later Charlie and the chocolate factoryhas concocted a new recipe… full-bodied.

It is well known, there is really something rotten in the kingdom of Denmark. In this devastating fiction, Thomas Vinterberg depicts a family reunited with great fanfare to celebrate the sixtieth birthday of the father who drags heavy saucepans. When it’s time for a toast, after delicately clinking his glass with his knife, Christian, the eldest son, puts his foot in the dish and reveals hard-to-swallow truths about sordid family realities. On the indigestible menu: incest, rape, incitement to suicide… Directed with a hand-held camera with vengeful aggressiveness, the film does not exactly reconcile with Nordic feasts.

Harry and Sally, two New Yorkers united by an unwavering bond, talk about everything freely. The proof during this restless lunch in a brasserie in the East Village where the duo who devours each other with their eyes wonders about the ability of women to simulate orgasm. To convince her companion of the feminine resources in the matter, Sally (Meg Ryan), interrupting her meal, immediately makes an eloquent demonstration to the greatest consternation of her sidekick (Billy Crystal) and the other customers. On the well-stocked menu of meal scenes that go into a spin, it is impossible to be choosy in front of this gourmet sequence. The icing on the cake.

Meals at the cinema: 10 cult scenes that turned sour

Engine for the 24th edition of the Antipodes Festival in Saint-Tropez
"Tre Piani", the company in all its stages
Jane Campion continues to make film history at the Golden Globes
Tweet
Share
Share
Pin
Other links: https://awardworld.net/resources/