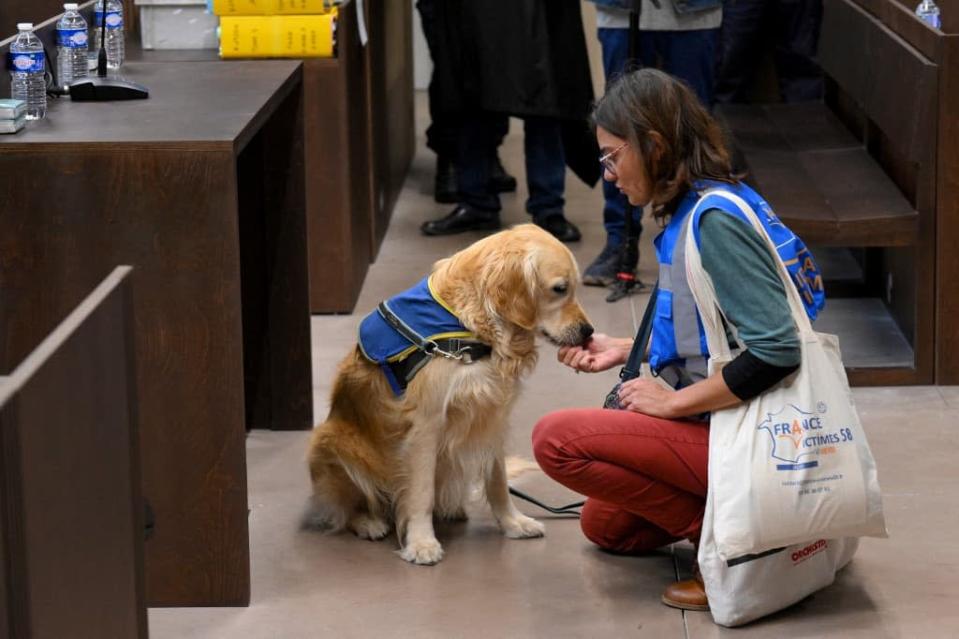 This is a first in France. Two dogs help the victims and the respondent in Millas Fatal Collision Trial which opened on Monday at the Marseilles court. The driver of a school bus collided with a train in 2017 is tried for homicide and involuntary injuries. Six children died in the accident, 17 were injured.

Earlier this week, the defendant was introduced to the black Labrador who will assist her throughout the trial to help him free his speech and manage his emotions. As soon as she cries, Rancho, sitting next to her, rests his head on her thigh.

“This technique is a support device and cannot be considered a gadget”, it is there to “allow you to bear the emotional burden of this trial”, warned at the start of the proceedings the president of the Marseille criminal court. , Celine Ballerini.

At the back of the room, Ouchi, a golden retriever, is at the disposal of the victims. On Tuesday, he accompanied two teenage survivors in their testimony. “He also helped two mothers of deceased children who learned of their last moments at the hearing,” reports Aurore Bourcereau, director of the France Victimes de la Nièvre association, who came especially with the animal.

This “legal assistance dog” system is already highly developed in North America. In France, the device is beginning to prove itself in investigations and has recently arrived in the courtroom. This is the first time that it has also been made available to a defendant.

“This animal mediation frees speech, builds confidence. It is an external reassurance device that lowers stress, heart rate and therefore is a facilitator of testimony”, estimates Jérôme Moreau, vice-president of the France Victimes federation.

Labradors and golden retrievers are known for their calm, their sense of empathy and contact with humans. They are half a dozen trained today in France, including Rancho, attached to the court of Nîmes and managed by the firefighters of Gard or Ouchi, which has its ties in Nièvre. The training costs around 17,000 euros, according to Florian Auffret, research and development officer at the Handi’chiens association.

“The dog took me to his bubble”

Chief Warrant Officer Jérôme Lapp, one of Rancho’s referents, remembers a trial in June in Marseille where a teenager had to testify in front of her theater teacher, tried for sexual abuse. “The president had a phobia of dogs but she wanted to test him out before the Millas trial and I was flabbergasted at anything the little one said she hadn’t said before. She said to me: ‘ The dog took me to his bubble. She felt like she was talking to him,” explains the firefighter. After two and a half hours of hearing, Rancho was exhausted: “He came to see me and he started snoring in the middle of the hearing”.

In Lyon, LOL came specially from Cahors for an investigation. He “brought serenity to the victims and was able to free the floor during extremely trying hearings”, underlines the president of the judicial court Michaël Janas who asked that his court be equipped with a dog.

“Hearing is not an easy passage to live… As soon as the dog saw that I was a little stressed, he would spontaneously come into contact, stick to me, put his head down, or feel my hand. I regained my calm”, reports for his part Eric (assumed name), 39, one of the 30 declared victims of a man accused of raping and sexually assaulting minors.

The prosecutor of Lyon, Nicolas Jacquet plans to invite the animal at different stages, “in the premises of the investigation services, in the offices of the judges or in public hearing”.

Millas trial: two dogs present in the courtroom to “soak up emotions”