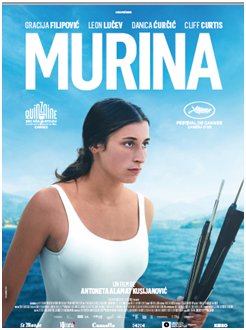 Under the blinding sun of an island of wild beauty, an athletic young girl in a bathing suit, harpoon in hand alongside her expert father, dives into the seabed every morning to fish for moray eels. Don’t be fooled by appearances. Behind the idyllic picture of a teenage fan of underwater exploration indulging in her passion in a heavenly place on the shores of the Adriatic, Antoneta Alamat Kusijanovic, Croatian filmmaker, winner of the Camera d’Or, Cannes 2021, offers us from his first feature film a ‘naturalist’ story anchored in the society of his country of origin, with dominant machismo, muted violence. And the straining of a ‘clan’ family under the effect of the irruption of a supposed stranger to the group. Above all, “Murina” takes us to the depths of the sea, favorite spaces of Juliija, an unpredictable heroine, confronted with the ebb and flow of unknown desires and complex aspirations. Faced with the explosion of contradictions of a ‘tribe’, corseted by sexist traditions and tempted by the reign of profit, Julija takes on before our eyes the stature of a haughty princess breaking the bars of her dark cave to trace her own lane, alone, in broad daylight. And “Murina”, a physical and emotional adventure, a philosophical tale in the land of the moray eels, seduces us with the infinite shimmer of its teeming tracks.

Captivating music (composition by Evgueni and Sacha Galperine) mixed with padded sounds from the depths, bluish mist split by two undulating bodies equipped with illuminating lamps and harpoons: Julija (Gracija Filipovic, exceptional talent of accuracy) and her father Ante (Leon Lucev ) engage in their daily activity, moray eel hunting. With a constantly renewed pleasure for one, with a routine know-how for the other. On the surface, on the rocky island, crushed by the sun, without the shade of refreshing vegetation, the tyrannical father, ex-captain who has become an embittered little boss, harangues at his ease a girl wandering on this piece of earth’s crust when she doesn’t relish a dip in the glistening waters at her feet again. His mother Nela (Danica Curcic), not very accessible to this taste displayed by a 17-year-old girl, a woman subject to the law of husband and father, even if painful tremors sometimes run through her closed face with a melancholy gaze. Even if she strives to lessen the paternal harshness by some sign of affection towards their child.

The ordinary life of a (small) family under the thumb of a man imbued with a machismo that even his wife seems to have internalized, in an island context with reduced social relations. A rather rough existence in a marvelous setting whose arrival of Javier (Cliff Curtis), -an old wealthy friend of Ante, driven by a more or less explicit ambition to invest in tourism on the spot-, comes to modify the course.

Even if the character of the stranger appearing in a group with apparently intangible rules has illustrious predecessors in the history of modern cinema (“Theorem” by Pier Paolo Pasolini in 1969 and the ‘lightning’ sexual visitation of a young a man of staggering beauty revealing to himself each member of a Milanese upper middle class family through his devastating power), Javier carries within him an ambivalence and weaknesses which in the end hardly make him a credible seducer. Nela, however, regrets having given up on him as a lover in the past.

Julija, for her part, disturbed by this man who could be her (dreamed) father and behaves more like a ‘flirt’ or a potential lover, confronts new emotions. Disconcerted by a solicitude that changes register several times (a disarray reinforced by the intuition of an old bond remaining between her mother and Javier), the young girl formulates the idea aloud: what if Javier allowed her to leave the island and discover new horizons? But the story that the heroine tells herself does not turn, once again, according to this agreed scenario.

This request destabilizes the seductive Javier, in full crisis on his side, already endowed with a rickety family, elsewhere. But the shock wave on the small island produced by this strange stranger, yet also subject to the dominant macho codes, does not stop spreading. In the simple apparatus of her gleaming swimsuit (she has swapped the white for a metallic blue offered by Javier), traversing the rocky asperities of the island or descending into its underwater depths of infinite riches, she stops for a moment. time at the edge of a small beach populated by a few young tourists on a stopover. And without firing a shot, we see her in the water exchanging a (first?) kiss with a boy of her age, blond, short hair, clear and laughing eyes.

Unfulfilled desires jostle in the body and the desire for autonomy is expressed in the head and in words. We will say nothing about the unleashing of physical and mental violence that such an outbreak in Julija triggers in a father who sees his frames of reference pulverized. It is up to the spectators to discover the treasures of intelligence and energy deployed by the girl in the sparkling swimsuit to get out of the dark, deadly cave and rejoin the light and real life.

Antoneta Alamat Kusijanovic may refer to Jane Campion and “The Piano Lesson” (Palme d’Or, Cannes 1993), having a certain Martin Scorsese as executive producer, she in turn invents a cinematographic form in tune with her subject. .

From the nudity of a land without vegetation or shade, between the intense whiteness of the frank light flooding the earth, the sea depths and their multiple variations of blue and the underground troubles of all kinds, “Murina” and Julija, its heroine without fear or reproach with an enigmatic charisma, dynamiting clichés, dismissing death impulses and celebrating, in one last prolonged, uncluttered and ethereal shot, the irrepressible desire to live, the thirst for the unknown.