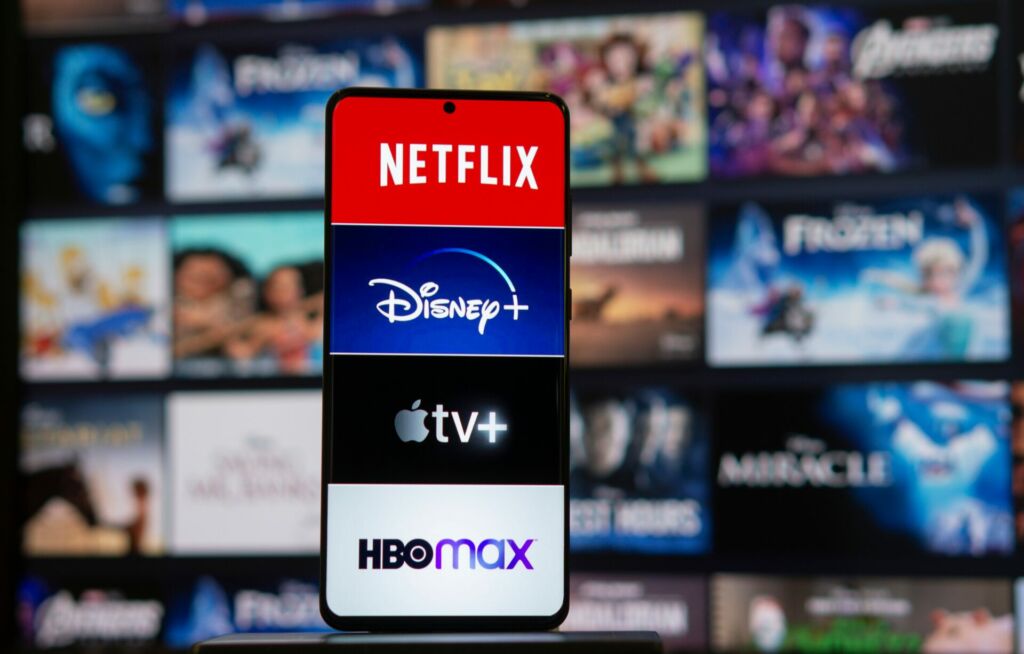 The latest barometer of video on demand (VoD or VàDA, that is to say on subscription, the English equivalent of VoD/SVoD) published by the CNC – National Center for Cinema and the Moving Image – in December 2021 draws an indisputable conclusion: streaming platforms are growing and have largely benefited from the health crisis. From January to October 2021, the video-on-demand market grew significantly: 10.7% compared to the same period in 2020. The number of daily subscription video-on-demand users is 8, 3 million in 2021, compared to 6.9 million a year earlier. The three behemoths Netflix, Amazon Prime and Disney+ fairly logically share the top ranking of the platforms most viewed by Internet users (nearly 64% of consumers declaring that they have watched at least one program on Netflix). It must be said that the American platform created by Reed Hastings (more than 200 million subscribers worldwide) intends to settle permanently in the French landscape, like a series like Lupine, which is one of Netflix’s most viewed programs.

However, the editorial line of Netflix and its main competitors sometimes leaves something to be desired, leaving countless moviegoers unsatisfied. Despite the big names that these platforms can boast of – Martin Scorsese, Noah Baumbach, David Fincher, Spike Lee, Paolo Sorrentino, Jane Campion, Alfonso Cuaron, or more recently Adam McKay with don’t look up, which has already become the second most watched film in Netflix history (with more than 320 million hours of viewing to date) – these films often find themselves drowned in the mass or serve to leader products platform to highlight their main trademark, which are the series. But then, what alternatives today to these streaming giants? Here is a selection of eclectic and demanding platforms, some more confidential, which are renewing the streaming landscape.

The principle of this platform tailored for film lovers is very simple: every day, a new film is selected and promoted by MUBI. Each film is then added to the films of the month. Since the beginning of January, you can (re)discover Monica (1953), the masterpiece ofIngmar Bergman, wild reeds (1994) by André Téchiné, or even Voyage of Time (2016), the sumptuous immersive documentary filmed in IMAX by Terrence Malick on the birth of the universe and of life, all narrated by Brad Pitt. MUBI welcomes all the cinemas of the world, classics, more confidential films, or more contemporary cinema. The platform offers a number of retrospectives and themes that will delight film buffs: on the program right now, double programs dedicated to Paolo Sorrentino – with The Big Bellezza (2013) and Youth (2015) – and Jane Campion – BrightStar (2009) and sweetie (1989) – an Almodovar retrospective, zooms on festivals, masterpieces classified by period, a selection of films by Agnès Varda, Charlie Chaplin, Abbas Kiarostami, François Truffaut, and of course the Top 1000 of the platform dotted with masterpieces such as 81/2 of Federico Fellini (1963) or wings of desire (1987) by Wim Wenders. With the “Notebook” section, the platform also offers the possibility of enriching its cinematographic culture with countless articles, lists, forums and informed reviews. Essential.

LaCinetek – The Cinematheque for directors

Dedicated to films that made the 20th century, La Cinetek has taken up the challenge of entrusting its catalog to directors concerned with transmitting their bedside films: in total, more than 1,400 films now inhabit this film library slowly shaped by filmmakers around the world. Cinetek offers both films in VoD (for purchase) and in SVoD (by subscription): each month, the platform offers a selection of ten films, recommended by filmmakers around a common theme. Thus, this month, LaCinetek offers a selection of comedies chosen by Michel Hazanavicius, Riad Sattouf, Céline Sciamma, Eric Tolédano and Olivier Nakache, Costa Gavras, William Friedkin, or even Martin Scorsese! The site also allows you to discover the films most cited by these filmmakers, such as Cold sweat (1957) by Alfred Hitchcock and Dawn (1927) by FW Murnau.

Unit rental: €2.99 per film
Subscription: €2.99 per month without commitment for a selection of ten films

UniversCiné, a platform dedicated to independent cinema, also offers a dual formula of subscription or single film rental. The platform is more dedicated to contemporary auteur cinema, although it also includes a wide selection of cult films (Mean Streets, Nosferatu, Fanny & Alexander, Fargo, etc). UniversCiné is more than 7000 films from directors from all over the world. The films in the catalog via several entry routes, by country, by theme (French cinema, European, US indie cinema, quest for meaning, LGBTQ), by genre (SF, horror) or by date added. Each month, a filmmaker from ACID (Association of independent cinema for its distribution) offers their selection of five feature films. At the moment, the platform is offering a selection of five films by Japanese director Kenji Mizoguchi (1898-1956), from the angle of his relationship to femininity, or even retrospectives devoted to Eric Rohmer, Mario Bava and Frederick Wiseman.

Subscription: €6.99 per month without commitment

Fruit of the collaboration between TF1, M6 and France Télévisions, the SVoD Salto platform, launched in October 2020, marks the attempt of the major French channels to compete directly with Netflix, Disney, Apple and others. The platform offers both “original” content, the broadcast of foreign programs – such as the special episode marking the reunion of the cast ofHarry Potter, entitled Back to Hogwarts, as well as the entire saga – and the replay of television programs (including some previews). Despite a mixed record – at the end of the 2021 financial year, the platform did not manage to reach its objective of one million subscribers and is struggling to produce “original” content -, Salto has the merit of displaying a diversity of programs, between great Hollywood sagas such asHarry Potter Where Back to the future, French and international series (Germinal, Ten percent, Downtown Abbey, The Office, The North Water, etc.), documentaries, television films, and cinema films (Atonement, Grave, Cold Sweats, The Revenant, Shining, etc).

Subscription: €6.99 per month for one user and without commitment

FilmoTV is the platform where you can find almost everything, from small independent auteur films to big American blockbusters: the platform’s offer is precisely there to satisfy everyone’s tastes. Currently available on FilmoTV: a selection devoted to Scandinavian cinema, with films such as The House that Jack Built (Lars Von Trier) Woman At War (Benedikt Erlingsson), The community (Thomas Vinterberg), or selections of films by Jacques Demy, Asghar Farhadi, Spike Lee or Fritz Lang. Over 700 films accessible by subscription and an even larger selection available for rental or purchase. A plethoric offer where any type of cinephile can nest.

Subscription: €6.99 per month without commitment

The Franco-German channel offers a free replay service – or sometimes previews – of its programmes, offering a vast choice of films, series and documentaries, most of which are available for several months. On the cinema side, we will be delighted to (re)discover classics such as M (1951) by Fritz Lang, The great expectations (1946) by David Lean or even Tales of the Wave Moon after the Rain (1953) by Kenji Mizoguchi. Also available are several films by Bruno Dumont, Raoul Ruiz, Turkish filmmaker Nuri Bilge Ceylan (including wintersleep, Palme d’Or in 2014) or the great Polish director Krzysztof Kieślowski. And to relax the atmosphere a little, do not miss Monty Python’s First Madness (1971), a compilation of sketches by the British troupe from the cult show “Monty Python’s Flying Circus”, available until May 31.