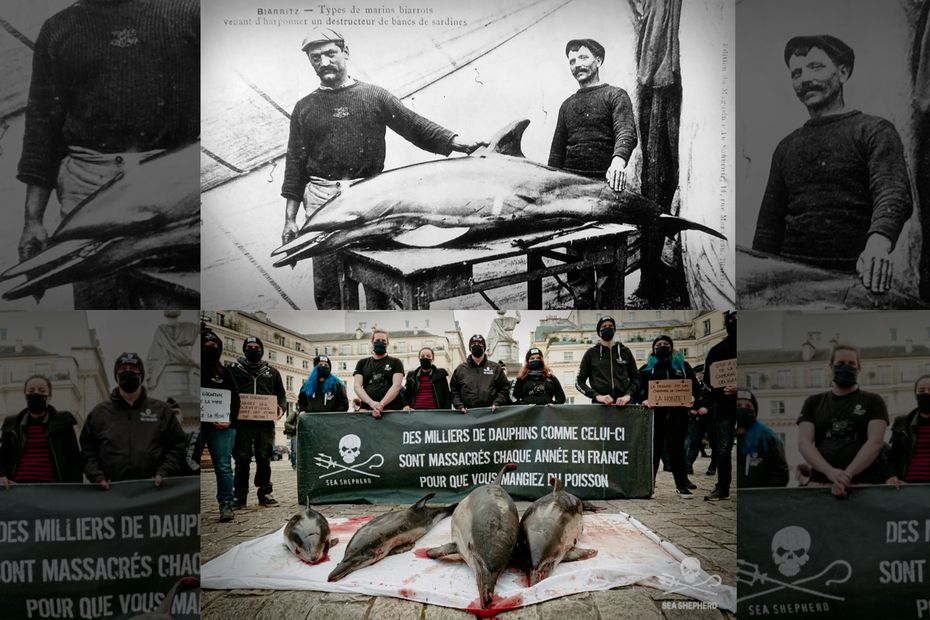 For the past few years, the NGO Sea Shepherd has been warning with shocking images of the carnage of common dolphins stranded on the beaches, due, according to it, to overfishing. At the forefront of the accused, the fishermen who rather evoke a recent proliferation of the species. Director Mathurin Peschet investigated this phenomenon and the evolution of the image of the dolphin.

Since December 1, 2021, 474 dead dolphins have been found on the Atlantic coast by the “national stranding network“.

Today, the dolphin has become the symbol of a marine world to be preserved. But this has not always been the case.

The presence of dolphins in coastal waters has been variously interpreted by maritime populations over the past centuries. At the end of the 19th century, these mammals were denounced as scourges for fishing. Their hunting was therefore recommended by the communities of fishing bosses and no one was interested in their protection.

Director Mathurin Peschet has made several films linking the relationship between humans and animals, both in the agricultural world and in fishing. His film “Of dolphins and men” produced for the Littoral documentary box and co-produced by Aligal questions both the NGO sea ​​shepherd but also scientists, historians, and fishermen. Excerpt from the documentary Of Dolphins and Men:

extract from dolphins and men

How and why to be interested in this situation which opposes the fishermen to Sea Sheperd, around the dolphins?

It started following the discovery of an anti-fishing tag near my home in Douarnenez. It was posted: “Seafishermen murderers, pray for the dolphins”.

I was challenged by this image, quite violent. I started to do historical research and I found photos dating from the beginning of the 20th century where we saw fishermen posing proudly with dead dolphins, like “a trophy”. At the time, the dolphin was considered a nuisance animal. He destroyed the nets and was accused of reducing the stock of sardines in the bay of Douarnenez for example. Eradication campaigns, sometimes with the support of the army, were even organised. Until the mid-1970s, the dolphin was sold on the stalls of fishmongers, especially on the island of Yeu where it continued to be eaten until fairly recently.

Our view of the dolphin completely changed in the early 80s, and it is precisely this change that interests me. In the film, we see both what is happening today and what was happening 100 years ago.

Several of your films address this question of the relationship between man and animals or nature, in the case of the dolphin, how can this evolution be explained?

Different parameters have to be taken into account. Change is primarily sociological. After the Second World War, there is a new type of population which gradually settles or takes an interest in the coast, far from the world of fishermen and peasants. The sociologist Daniel Faget explains this phenomenon very well

In the 1950s, the generalization of paid holidays and the automobile allowed a greater number of people to discover the sea. Something unprecedented for contemporaries, the underside of it can now be observed thanks to progress in exploration underwater. A second unknown world then opens up, in a planet whose emerged spaces are now fully explored.

At the same time, there is a cultural movement that was born with the release of the film by Cousteau and Louis Malle ” The silent world “, palme d’or at Cannes in 1956, and Robert Merle’s book ” A sentient animal “. The dolphin is a curious animal, which easily approaches boats and humans. It definitely makes him likeable. It has gone from a “harmful” species to a totem of the animal to be protected.

Today, is the dolphin threatened by the increase in these catches in the fishing nets?

Accidental captures of dolphins mainly concern, in the Atlantic zone, the species of common dolphin which until now is not considered to be in danger. But these captures are in real increase.

Scientists at the Pélagis Institute in La Rochelle are trying to understand why there are more dolphins in the nets. This is mainly linked to the movement of dolphins who now come closer to the coast and therefore in fishing areas. Gillnetters and pelagic yards are in the line of fire in this affair. This is the main target of associations like Sea Shepherd.

She wants the complete cessation of fishing in certain areas and at certain times of the year, which is not viable for fishermen. However, it is very difficult to have precise estimates of the number of dolphins living in the North Atlantic. For the past year, trawlers have had to put pingers in their nets, an acoustic repellent capable of triggering only when dolphins approach. According to the fishermen, the method is effective. Sea Sheperd is much more critical and does not hesitate to sometimes use the strong way. The association makes no secret of it, this highly publicized fight to ban fishing is also a way of defending the idea of ​​a “Vegan” world, the spearhead of Sea Shepherd.

“Of dolphins and men”. Directed by Mathurin Peschet – Co-produced by Aligal

“Of Dolphins and Men”: a documentary on stranded dolphins and the opposition between Sea Sheperd and fishermen