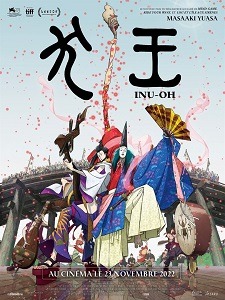 A look back at our (quite limited) viewing of the Mondovision category and others from the 2022 Strange Festival. Quite a few things because of our schedule, but it was exciting!

Inu-Ohfilm by Masaaki Yuasa (National release: November 23, 2022)
A raspy-voiced storyteller begins a story taking us back 600 years. Accompanied by some notes of biwa [1], he tells us the story of Tomona, a young blind boy, and Inu-Oh, a deformed being. If we weren’t too interested in the synopsis when we arrived in front of this film, from the first images, we plunge the viewer into a unique atmosphere. The designs aren’t necessarily pretty, but the animation is amazing and the images are mesmerizing.

The further we go, the more we realize that the staging stirs our guts. The music reaches us deep within us and we can only marvel at the story we are following. Here, we are told the legends of the Heike clan, we are danced and sung about their exploits as well as their defeats. The two main characters are doubled with great accuracy because it is their voices that transmit a large part of the emotions that strike us.

Inu-Oh invites us to discover the greatness of storytellers, the importance of staging, the beauty and strength of those who entertain us. It’s an experience not to be missed and we also invite you to discover Avu-chan’s group [2], the latter lending her unique voice to Inu-Oh. Attention, we also want to specify the importance of the music in this film which is omnipresent. 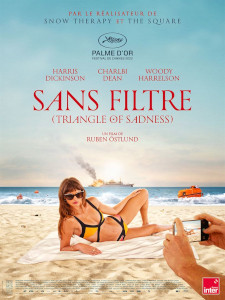 Without filterfilm by Ruben Ostlund (National release: September 28, 2022)
The film that won the Palme d’Or this year is a critique of society. This film does not bother with subtlety. We follow Carl, model, and Yaya, influencer. Yaya has been invited on the luxury yacht for a dream cruise. The two young people meet several personalities there. The rich, the real rich, those we don’t mix with, those for whom we crush and to whom we answer “Yes” to each requirement. One of these requirements is going to be problematic. Everyone is then reduced to basic and human weaknesses.

Without wanting to reveal too much of the scenario, we end up with scenes that we see quite rarely. If we can find a few small things low ceiling, it is all the same interesting to see these personalities being reduced and subjected to their simple physiology.

The last part brings us back to the basics of this kind of film. Nevertheless, everything is well staged and we don’t really feel the little lengths that embellish the film, unless we are totally detached from the subject and then there, time stretches out. 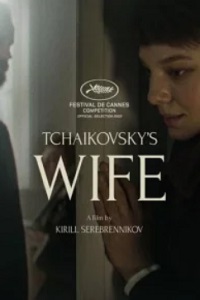 Tchaikovsky’s wifefilm by Kirill Serebrennikov
Filmed in rather precarious conditions, Tchaikovsky’s wife still manages to pull out of the game. First of all thanks to a director full of resources, the latter has a touch of his own, but also by the talent of the actors in front of the camera.

Tchaikovsky’s name still resonates today for his ballets and other works. His life is more diffuse, and that of his wife even more so. Indeed, the incorrigible loner married Antonina Milukova in 1877. If the initial idea was to stifle rumors about his so-called deviant sexuality, the latter quickly realized that his life together as a married man made him mad.

This story, we live it rather alongside this madly in love woman. If she promises that simply being by his side can satisfy her, her obsession with Tchaikovsky ends up devouring her. He belongs to her maritally and that is the greatest strength she can have. God blessed their union so who could separate them? Nobody. Aliona Mikhailova is simply amazing in her performance and mesmerizing charisma. The actress captivates every moment, whether she plays the young lover or the unhealthy wife. She is in deep denial and we see her gradually sinking into madness. If we do not know how faithful the film is to reality, its decline is terribly credible, especially since we know that this woman ended up dying in 1907 in a psychiatric hospital where she was interned.

The atmosphere is cold, the sets few (you can sometimes recognize places that have been used several times) and the setting quite small, but you let yourself be absorbed by the images. On several occasions we are offered sequence shots of great quality.

Tchaikovsky’s wife is a singular film that will not appeal to the greatest number, but it attracts and has a macabre poetry of its own that will find its audience.