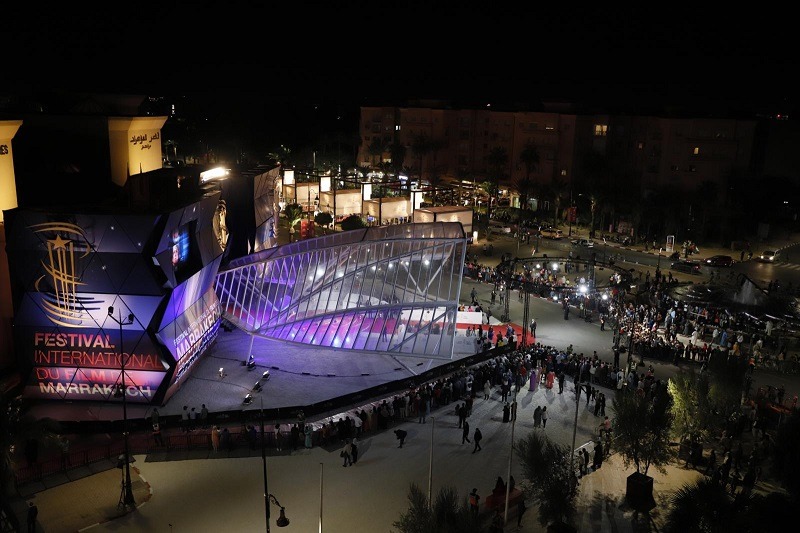 This ceremony took off with the traditional parade of film icons present, who walked the Red Carpet to the cheers of an audience who came to meet and discover their favorite stars.

The festival-goers also gave a warm welcome to the big names in Moroccan cinema as soon as several national celebrities appeared on the “Red Carpet”.

The evening continued inside the Palais des Congrès with a posthumous tribute to leading figures of the national artistic and cinematographic scene, who have died during the last three years.

Then, a thunder of applause resounded with the rise on stage of the president and the members of the Jury of the official competition of this edition which continues until November 19.

Speaking on this occasion, Mr. Sorrentino expressed his heartfelt thanks to King Mohammed VI and Prince Moulay Rachid, President of the Marrakech International Film Festival Foundation, for organizing this cinematographic event which is more to present.

The highlight of this ceremony was the tribute supported returned to the indian actor Ranveer Singh who received, on this occasion, the Golden Star of the Festival from the hands of the adviser to the president of the Foundation of the International Film Festival of Marrakech, Mrs. Melita Toscan Du Plantier.

Ranveer Singh, one of the four emblematic figures of the 7th art from different Continents to whom this edition will pay tribute in recognition of their brilliant careers, has experienced, in the space of a decade, a lightning ascent and has established itself as the one of Bollywood’s most talented actors, going beyond the borders of his country.

In addition to Ranveer Singh, the Festival, true to its tradition, will also pay tribute to the Scottish actress Tilda Swintonto the American filmmaker James Grayto the Moroccan director Farida Benlyazidwho will also receive the Festival’s Gold Star.

Subsequently, Mr. Sorrentino and the members of the Jury had the honor of officially declaring this 19th edition of the Festival open.

The highlight of this sumptuous opening ceremony was the screening of the film “Guillermo del Toro’s Pinocchio”, the new work of the Mexican directors Guillermo Del Toro, who had won the Oscar, and American Mark Gustafson.

The film reimagines the classic story of a wooden puppet brought to life in this stunning stop-motion musical tale.

To remember that fourteen feature films are in the running for the “Golden Star” in the official competition of the Marrakech International Film Festival.

In addition to the feature films competing in the official competition, 62 other films will be screened as part of the “Gala screenings”, the “Special screenings”, “the 11th Continent”, the “Panorama of Moroccan Cinema”, “Young Audience”, the “Outdoor screenings at Jamaa El Fna”.

Some films by international and Moroccan personalities, to whom the festival will pay tribute, will be screened at the Palais des Congrès, at the Colisée cinema and at Jemaa El Fna, thus completing this rich selection of 76 films.

In addition, big names in world cinema will be in free conversation with the public of the ocher city during this edition, as part of the “In Conversation with …” program, one of the most anticipated events of the festival, resulting in intense and exciting exchanges.

Not deviating from its rule, the International Film Festival of Marrakech has reserved a place of choice for national cinema, with the “Panorama of Moroccan cinema” which will present this year a selection of five films “DAYS OF SUMMER” (Ayam Seif ) by Faouzi Bensaïdi, “ABDELINHO” by Hicham Ayouch, “POISSONS ROUGES/GOLDFISHES” (Asmak hamrae) by Abdeslam Kelai, “LA CARTE POSTALE/THE POSTCARD” (Fi zaouiyat omi) by Asmae El Moudir and “ZIYARA” by Simone Bitton .

In total, 15 Moroccan films will be shown in the different sections of the Festival.