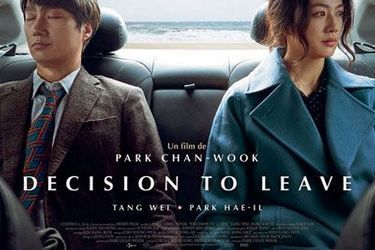 Polar in a loving tribute to Alfred Hitchcock, “Decision to Leave” was our Palme du Coeur at Cannes 2022. Meeting with a genius of the genre.

It’s called the Almodovar curse. That of a Palme d’or that keeps escaping you. For his fourth selection in competition, the one who is considered one of the masters of Korean cinema has again missed the supreme award at Cannes. Nothing to complain about either – he won the prize for directing – but the missed “Old Boy”, in 2004, comes back to memory: he had been capped on the post by “Fahrenheit 9/11”, by Michael Moore, despite the preference of the president of the jury, Quentin Tarantino, for the film by Park Chan-wook. Kicks him into touch: “I am happy to win prizes at Cannes, whatever they are. It’s the only place in the world where movies become the center of our lives. »

I worship Hitchcock, I studied him so much in college he unknowingly shaped me

A barely veiled variation of Hitchcock’s “Vertigo”, which makes the filmmaker smile when it is mentioned: “Everyone talks to me about this but it was not my intention. I worship Hitchcock, I studied him so much in college that he shaped me unconsciously. His incredible creativity can still be found in this film: an idea of ​​cinema per shot and this desire to make the spectator an actor, almost a decision maker of the plot. “I like to play from the point of view. The subjective is a marvelous cinematic tool,” explains Park Chan-wook, who admits to preparing his films with total meticulousness, each detailed plan on paper becoming almost a pre-editing without any images having been shot.

Idol in his country (“Joint Security Area”, in 2000, broke the box office record), sidekick of the author of “Parasite”, Bong Joon-ho (he co-produced his “Snowpiercer”), he reigns with him on a Korean cinema that has become one of the most inventive. He sees it as “the sum of the influences of Hollywood cinema and European art and essay, a style which also finds its source in a population tormented by history, with a solid character and which adores the mixture of genres. Here, the public does not want franchises or prefabricated films! »

And if Park Chan-wook was, too, the perfect synthesis between style and purpose, almost a member of the new wave? “I would have liked to,” he admits. I sometimes thought of the “Adèle H.” by Truffaut for “Decision to Leave”. But, with Hitchcock, it would be Claude Chabrol my other model. »

Park Chan-wook (“Decision to Leave”): “The public does not want prefabricated films! »