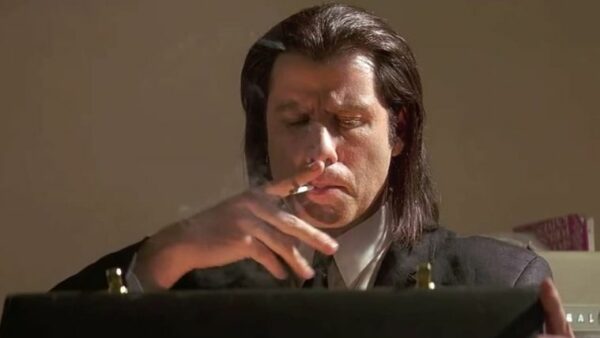 When we think of a cult film, the words pulp Fiction are never far away. And for good reason the film directed by Quentin Tarantino which won the Palme d’or at Cannes in 1994 is definitely part of this category and many consider it to be their favorite. If you certainly know the plot very well, do you know as much behind the scenes of this exceptional feature film? Here are 5 filming secrets you probably didn’t know.

The role of Vincent Vega was a real challenge for John Travolta, especially because he had to play a heroin addict without having ever taken this drug. Unable to help him directly on this subject, Quentin Tarantino sent the actor saturday night fever talk to one of his former addict acquaintances to find out. The director’s friend then advised Travolta to take a tequila binge and lie down in a hot pool. According to him, it was the best way for the actor to experience the feeling. The interpreter of Vincent Vega confided this during an interview with James Lipton in 1994 and revealed that he had tried the experience with his wife.

The Truth Behind Marsellus Wallace’s Band-Aid

Some may have already wondered why Marsellus had a bandage on his neck in pulp Fiction and the answer is far from being so strange. Actor Ving Rhames simply cut himself shaving his head and Quentin Tarantino thought it added a little more visual something and asked him to keep it. Like what, sometimes a small accident can change a scene!

The overdose scene turned upside down

One of the most memorable scenes from pulp Fiction is Mia’s overdose (Uma Thurman) where a panicking Vincent must then plant a huge adrenaline syringe in his chest to restart his heart. Obviously, Travolta couldn’t decently stab Thurman with a real needle. This scene was then shot in reverse, with a dummy syringe. The result that we see on the screen is none other than the scene played backwards!

In pulp Fiction, John Travolta’s character drives a 1964 Chevy Malibu. In reality, this car belongs to Quentin Tarantino himself. The car in question was stolen after the end of filming and was only found in 2013! However the car is not the only prop used on the set that belongs to the director, it is also the case of the wallet that belongs to Jules (Samuel L. Jackson) in the film.

The story behind the mention of Amsterdam in pulp Fiction

The mention of Amsterdam is not insignificant in the film. Remember at the start of pulp Fiction, Jules and Vincent are talking in the car and the latter says that he has been to Amsterdam and explains the rules on marijuana use to his partner. The reason Travolta’s character talks about the Dutch capital is simply because Quentin Tarantino was there for 3 months when he wrote the first draft of the film.

Pulp Fiction: 5 filming secrets that will make you see the film differently