From 01 to 04 November, the NFT.NYC will take place in New York. The biggest event in the NFT industry had in its ranks director Quentin Tarantino who announced the launch of seven NFTs based on his hit 1994 film “Pulp Fiction”. During the announcement, he announced explained that the collection will be auctioned through OpenSea, the largest NFT Marketplace in the world.

Tarantino, began his speech by mentioning that two years ago he started in the world of NFT to which he was very attracted. He also shared a little story which, in his own words, was the reason he shared on the NFT.NYC scene today.

He said he kept the script manuscript for the film Pulp Fiction for 24 years. However, it wasn’t until recently that his team, involved in the whole recent NFT boom, asked him if he had anything interesting that could be turned into NFT. He said he immediately thought of the script mentioned above which was written entirely by hand. 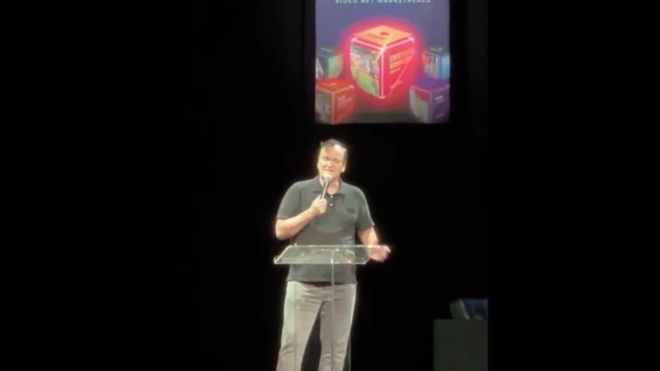 Quentin Tarantino on stage at NFT.NYC

After a few conversations related to the topic and reading the original script, his team came to the conclusion that it was something quite interesting and new. So, they agreed that people might actually be interested in this material, especially within the NFT community. So they selected seven scenes from the original Pulp Fiction manuscript and took the original pages, scanning them later to prepare a full NFT version.

“These are complete dialogues that have been changed. New things, things that I dropped later, like for example the character that John Travolta plays, Vincent, it was not Vincent originally, ”he revealed.

He also pointed out that there is a lot in the original manuscript that was never published or shared with anyone. Things with all the good and bad to come, all the “weird squiggles” misspellings, which is everything. Seven scenes that will be available in “an NFT secret”.

Launch of the NFT in one month via auction

He also mentioned that the launch will take place in about a month. They will offer the first scene through an auction and it will be, (reiterated again) a secret NFT. Which means that when the user is successful, they can decide to do whatever they want with it.

These are seven secret scenes from this successful film that will be created without any editing. In other words, each user who accesses these NFTs will have a “secret” scene that can only be seen by the sole owner of the NFT in question.

Based on the secret network

Likewise, it has been learned that NFTs are based on Secret Network, the first Layer 1 blockchain with default privacy for applications. SCRT Labs, the lead development company behind Secret Network, will support this NFT removal, showcasing some of the network’s revolutionary native access and privacy controls.

The NFTs created will contain bonus content such as original script pages, handwriting, new commentary from the director himself, and other details about the film and Tarantino. In addition, depending on what has been announced, they will be able to reveal new content from both the artist and the creator of the film.

Many Tarantino films have gone cult, but Pulp Fiction stands out with a $ 213.9 million hit made on a modest $ 10 million budget. The film is critically acclaimed, won the Palme d’Or at the Cannes Film Festival and garnered seven Oscar nominations. Including the best film. Tarantino also won the Oscar for Best Screenplay.

Quentin Tarantino ended his talk at NFT.NYC, remembering that a year and a half ago he didn’t know how NFTs worked. But the more his friends told him about it, the more he became interested in learning. In this sense, he underlined how great it seems to him to be able to make art an exclusive access, but at the same time to be able to share it with the community. And, in turn, they want to share it with more people, if that’s what they want. He just likes the idea that the buyer has the power to decide and do whatever he wants with him.

Quentin Tarantino on stage at NFT.NYC announced the launch of his NFT collection based on “Pulp Fiction” – Marseille News