Organized by the representation of the European Union in Morocco, the European Film Weeks are back this year with a selection of eight feature films which have been selected or awarded prizes at the biggest film festivals in the world, and three short – films by promising filmmakers from southern Mediterranean countries.

With screenings scheduled from December 7, 2022, this year, thanks to the co-production system, the selection made up of eight European films will represent ten countries: Germany, Belgium, Denmark, Spain, France, Italy, Luxembourg, the Netherlands, Romania and Sweden.

Initiative of the representation of the European Union in Morocco, which aims to introduce the Moroccan public to major European successes, through the eyes of renowned filmmakers and young film talents, on a Europe of diversity, the Weeks of European film are organized since 1991 in partnership with the Ministry of Youth, Culture and Communication, the Moroccan Cinematographic Center (CCM), the Hiba Foundation and the Superior School of Visual Arts of Marrakech.

Thriller, comedy, animation, drama, romance, social chronicle and political fable are on the program for this 29e edition, which begins on December 7 at the Lutetia cinema in Casablanca, with one of the event films of the year, Without filterby the Swedish Ruben Östlund, a social satire with ferocious humor and caustic remarks which won the Palme d’or at Cannes last May.

Other highly anticipated films, As Bestas by the Spaniard Rodrigo Sorogoyen who returns with an impressively masterful rural thriller, carried by a very fine cast, or even Closed, by the young Belgian director Lukas Dhont, who confirms his talent with this moving work on the loss of innocence and the quest for identity.

Finally, with Other people’s childrenthe French Rebecca Zlotowski certainly signs her most beautiful film and tackles a rare subject, the growing attachment of a forty-something woman for her companion’s daughter.

Three short films from countries south of the Mediterranean shore complete this selection of eight films, starting with jmar, which reveals the singular talent of its director, the Moroccan Samy Sidali. Second short film presents, Warshaa reverie suspended in the sky of Beirut, signed by the Lebanese Dania Bdeir, Grand Prize at the Sundance festival this year, and finally, lastly, Last Days of Summerby the Palestinian Nayef Hammoud which follows the strange day of a young man whose neighbor has just been murdered. 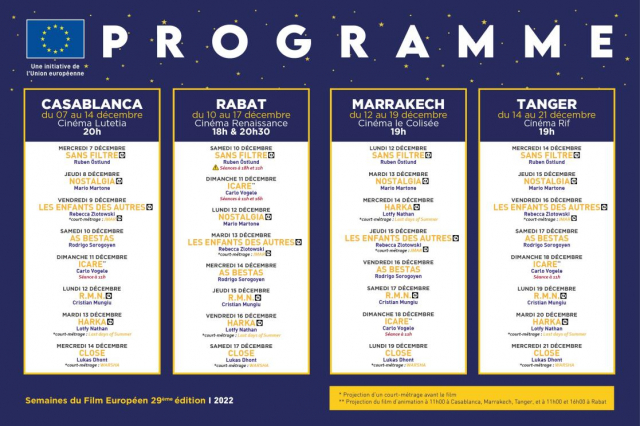 The program of the 29th edition of European Film Weeks in Morocco.

The European Film Weeks will take place according to the following schedule: