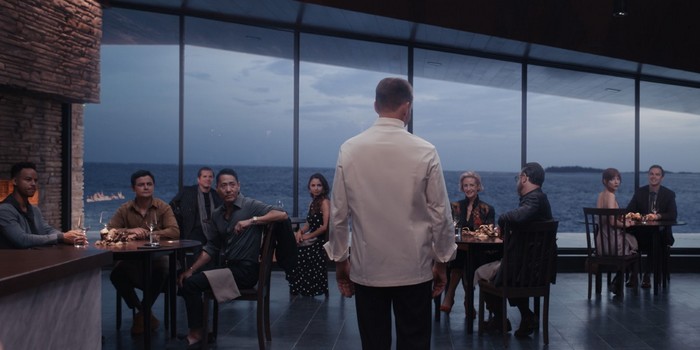 The Menu is the little surprise of this month of November, produced by Searchlight Studios. A genre film with an eye towards the thriller and satire of the gastronomic world, carried by a good cast and a most delightful black humor.

Mark Mylod has a relatively atypical career. Having made himself known with the turbo-dumb Ali G for Sacha Baron Cohen, the guy then branched off to the world of TV, directing several episodes of Shameless and Succession notably. Here he is back for a relatively atypical film, whose high-concept is ultimately not so far removed from a certain wave of horror films drawing on our social fractures (get-out being the spearhead).

Screenwriters Will Tracy and Seth Weiss imagined The menu in a simple way: after a trip to Norway, where the first landed in a chic restaurant on a remote island. In this unique setting, the screenwriter wondered what could go wrong if he was stuck there for several hours, after the boat has left. A starting point that will ultimately be the basic canvas of the film.

The menu begins when a couple made up of Margot (Anya Taylor Joy) and Tyler (Nicholas Hoult) embark on a boat bound for the small island of Hawthorne. In fact, they are a dozen personalities to be invited that evening for a meal at the restaurant of the great chef Julian Slowik (Ralph Fiennes). Among the guests, we find a great culinary critic and his publisher, three friends involved in the same company which finances Slowik, an actor whose fame is increasingly precarious accompanied by his secretary, and finally a bourgeois couple accustomed to the famous restaurant. .

It is difficult to fully address The menu without spoiler, but one of the pleasures of viewing is to discover how far the plot will go without spoiling the content of what is offered on the menu! Indeed, like the trapped characters, we are invited to discover a gastronomic meal whose various thematic dishes are revealed as they go along, each time with consequences or revelations about the famous characters (as in a whoddunit in short).

The film always goes further with a very communicative pleasure and a successful comic tempo. Furthermore, The menu wants to be visually neat: in addition to an Ikea-like artistic direction bringing a certain coldness without an ostentatious aspect, the photography of Peter Deming (Twin Peaks The Return, Mulholland Drive) highlights the scenography as much as the various dishes concocted in an aesthetic way.

The other strength of the film lies in its casting. Among the secondary characters, John Leguizamo (When They See Us) and Hong Chau (watch men) come out on top, respectively in real comic relief and as a landlady with a pronounced frigid aspect. But the real stars of this cheering Menu are Anya Taylor-Joy (Last Night in Soho, The Northman) and Ralph Fiennes (Harry Potter and the Deathly Hallows, The King’s Man). We no longer present the first, which once again gives us a high performance in a proactive character with salutary insolence. A protagonist in the form of a disturbing element as we therefore like them !

What are you? A stupid sandwich!

Regarding the second, it’s totally exhilarating to see Fiennes playing a character we love to hate. Far from being a caricature à la Gordon Ramsay (or Philippe Etchebest if you prefer), Slowik has more to do with the guru and the passionate chef than with the cliché mastermind of a horror film. In addition, his actions and motivations find a particularly relevant and always justified reasoning, sending the rest of the characters back to their own nature! Which will bring us to the main limitation of the film.

The Menu is indeed a caustic satire on the world of high-end gastronomynot hesitating to hit the bourgeoisie as it should (we are not so far from a certain Palme d’Or on this point). And if the script magnifies the features in a more playful perspective, its purpose is rather classic, while incorporating the sacrosanct cheeseburger into the equation, as a necessary and absolute reminder of the American model in the equation.

A certain lack of finesse on its last segment which in no way handicaps the purely pleasurable desires of this meal that could not be more delectable.which we savor with great pleasure!

The Menu will be released in cinemas on November 23, 2022