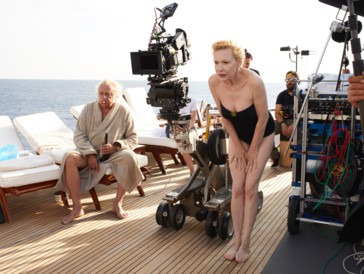 He certainly signed one of the great films of the year 2022, a jubilant satire palmed gold at Cannes and which deconstructs beauty to make it a “currency”. In an interview, Ruben Östlund confided in us in all sincerity on “Without filter” and its references, from Michael Haneke to Monty Python, and on the importance of the public.

In theaters since September 28 in French-speaking Switzerland, “Without Filter” will have marked 2022 with a white stone. For its verve, its aesthetics and its insolence at the heart of a variation on the fashion industry and the rulers of this world, if the criticism is acerbic, so is the poetry. Awarded the Palme d’Or at Cannes, “Without Filter” (“Triangle of Sadness” in VO) is a film with explicit content and scathing morality. Ruben Ostlund achieves the feat of delivering a particularly pleasurable experience.

Cineman: Ruben Östlund, where did the idea for “Without Filter” come from?

RÖ: I wanted to analyze the notion of beauty as currency. Nobody is born fundamentally “beautiful”, nevertheless this can become the guarantee of your social ascent. What also interested me was to observe these notions through a male model, most certainly also to mirror what women endure in this profession.

The behavior of the characters and everything that happens to them in the film is linked to their financial situations and their social conditions. Abigail, the housekeeper, probably ultimately makes decisions based on her status, not who she is as a person. And then it is also an observation vis-à-vis our time. We are obsessed with the individual to the point of constantly making value judgments about individual actions instead of looking at the context, and the situations that induce these behaviors.

You organize many test screenings to gauge your films. Why are they important?

RÖ: What I want above all is for the film to work collectively with an indoor audience. And if I sit alone in front of my screen to edit the film myself, it’s a whole different dynamic. It’s only by watching the film with an audience that you can feel if people are paying attention, if they give up, if a scene is too short or on the contrary too long. That’s why I organize these screenings. And when I feel that the audience is in the film from beginning to end, then I understand that finally I have found the appropriate rhythm.

On the set of “Without filter”
© Xenix Filmdistribution GmbH

There is often a gap between award-winning films at festivals, at Cannes for example, and their reception in theaters. How do you view that?

RÖ: As far as I’m concerned, I want to create films that ask people to leave their homes to go to the cinema. Since “Force Majeure”, I have always favored attractive environments to tell my stories: a ski resort, the world of art for “The Square” or the world of fashion and a lush island here. In reality, I am only speculating around these themes.

The disease of European art house cinema is that when we obtain funding from the United States, we are economically viable. We don’t need to push to the end. If you watch American cinema, when the public doesn’t see it, you lose your job. The economic pressure makes them completely dependent on the opinion of the public, it is vital for them. European cinema has become a bit like arthouse cinema that tries to talk about relevant subjects. I think it’s okay to create films that are inspired by a more American tradition, while keeping a European tradition. In other words, making a completely wild film with content is possible.

Among the centerpieces of the film, there is obviously the masterful scene of the captain’s dinner on the yacht. What were the technical challenges to the realization?

RÖ: We had the whole interior of the yacht on a structure that swayed up to 20 degrees and everything else was blue background. And so it was a bit absurd to do that, because the structure made a lot of noise and we had to make it as quiet as possible to shoot the dialogues. As a director, I wanted to have total control of the scene. I wanted everything to move so much that even the film’s technical team had to take seasickness pills (laughs). People were also sick on set. (laughs) It was a very tough part of filming.

Did you have any references in mind for this scene?

RÖ: I wanted to go well beyond what the public could expect from me. I wanted to push the power 10 thing, otherwise it would have been useless. In particular, I watched “The Meaning of Life” by Monty Python with an absolutely classic scene, and also films about the world of fashion, such as the film by Robert Altman “Ready to wear”. So, I had some references, it’s true, but what I particularly like is watching the film with an audience to better understand its impact and its dynamics.

“Without filter” is composed of three chapters. This is not a first for you. Where does this idea come from?

RÖ: In film school, I was very inspired by the film “Code Unknown” by Michael Haneke and the way he allowed himself to create a fragmented narrative, at the heart of a scheme that takes on its full meaning at the end. What interests me is also to create scenes that are impactful enough so that, even once removed from the set, they can have a certain quality.

This is the third time you’ve worked with cinematographer Fredrik Wenzel and all of your scenes have a special touch. How do you compose these shots?

RÖ: I do a lot of storyboards. It allows you to redraw for hours and hours to finally come up with an idea for the film. It also allows me to focus on one thing at a time. Sometimes these storyboards are also used to determine the right place to shoot a scene. Fredrik has a photographer’s intuition and he makes decisions even as we are filming and watching the actors perform. I like to plan ahead, but it’s also once we’re on set that we discuss camera positions, types of lenses…

Finally, your view of the fashion industry is particularly funny and cynical. Have people from Balenciaga or H&M come forward to you since the film was released?

No. That said, we had asked Balenciaga to create a paper vomit bag for the premiere of the film in France (laughs) but no, no one showed up.

More information on “Without filter”