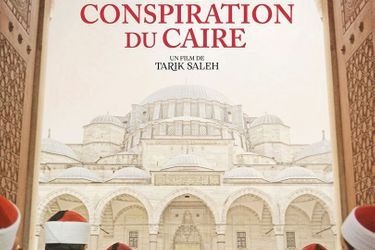 The filmmaker continues his radiography of Egyptian society in “The Cairo Conspiracy”, a spy thriller and a brilliant study of morals. Meet.

Tarik Saleh is a man who is hard to put in a box. Swedish by birth but of Egyptian origin. Western and Eastern. Muse of film festivals who assumes to respond to the sirens of Hollywood. A man who says he is lonely – “having to direct 200 people on a set remains an ordeal for me”, he sighs –, but a great talker, who argues and argues again in an endless discussion. Like his films, unclassifiable.

Telling the meanders of a society, whatever it is, always looks like a thriller

After the international success in 2017 of the “Cairo confidential“, brilliant thriller and scalpel study of a corrupt Egypt on the verge of revolution, here is “The Cairo Conspiracy”, its political counterpart or almost. After the film noir, the spy thriller. “I know it’s surprising, but, sickly film buff, it’s genre cinema that pushes me towards a project, not the political subject. Telling the meanders of a society, whatever it is, always looks like a thriller. »

This time he radiographs the epicenter of the power of Sunni Islam, the renowned Al-Azhar University, a political and religious nerve center in the footsteps of a young fisherman, Adam (the dark Tawfeek Barhom), who will learn manipulation, influence and power. Facing him, a surly cop (Fares Fares, the alter ego of the director, present in all his films). Saleh, who venerates the cinema of Melville and the prose of John le Carré, was inspired this time by Umberto Eco and the “Name of the rose”.

He does not judge but never ceases to document his remarks. “I am not criticizing religion, but I want to question the notion of the sacred which still upsets all our societies today. We may disagree, but let’s discuss it, shall we? »

The filmmaker has not been able to set foot in Egypt since 2015, having become persona non grata for the authorities of a country that he only discovered when he was a teenager. “He is as near as he is far. Telling about Egypt is perhaps my way of rediscovering my roots”, notably those of a fishing grandfather.

“But where are you from? is the question he has always been asked, even if it means making it a life mantra. Tarik Saleh has been Sweden’s best-known graffiti artist (one of his frescoes has become a national cultural icon), has made raw documentaries on Guantanamo and Che Guevara, feels like a journalist – “looking for the truth is also tell a story “.

He experienced the surprise success of “Confidential Cairo” by proxy since he was filming the “Ray Donovan” and “Westworld” series in Hollywood. He just remembers being surprised to win the Swedish “Cesar” for best film in 2018 against “The Square” by his fellow citizen Ruben östlund. The latter took revenge this year at the Cannes Film Festival with the Palme d’Or for “Without Filter”. Saleh settled for the script price. The ways of a jury, too, are sometimes impenetrable…

Tarik Saleh (“The Cairo Conspiracy”): “Telling about Egypt is perhaps my way of finding my roots”