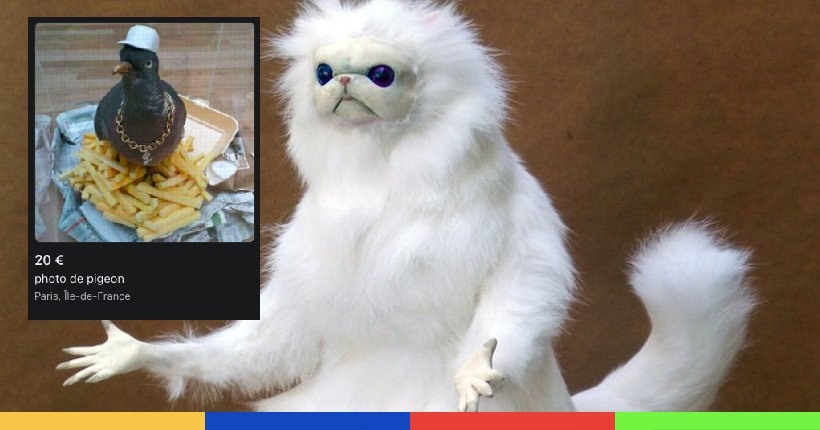 You may be one of the 800 million or so users who use Marketplace, Facebook’s famous peer-to-peer sale and purchase service launched in 2016. If the tool is super useful for collectors or for making purchases at low prices, we nevertheless often come across rather strange advertisements. So, after the great success of the completely stupid objects offered in the Wish pubs, we decided to present you a small anthology of the most borderline things that we found on Marketplace.

Let’s start with a great Marketplace classic: frankly creepy objects. Between an “old doll” at 150 euros which seems ready to suck the soul of anyone who gets a little too close to her, and an “old bear” who pulls the mouth, we are not really conquered. Looking at the photos, we understand why some people try to get rid of them. Except we saw annabelleus, so we will pass our turn.

Of course, NFTs are also on the rise on Marketplace, where the choice is great. Some reach clearly ridiculous sums. The description of the one below still made us laugh: “NFT COLLECTION THAT CREATES INCOME”. It means absolutely nothing.

On Marketplace, many people think they are caterers. And even if sometimes the food looks really good and we almost let ourselves be tempted by cute little cupcakes, it’s far from always being the case. As proof, we want this “hard bread” sold in the Grand Est. Well, at least it’s free.

Even if these water bottles are not borderline in themselves, it is still strange to ask 2 euros for a small bottle of Cristaline decorated with a label and a small pink bow. Clearly, we’re not sure it’s really worth it. Stranger still: we find this kind of ad galore on Marketplace.

Of course, we also had fun looking for the word “drug” in the search bar. Nevertheless, like the word “weapons”, our searches were initially not very fruitful. But we did not give up, convinced that we could find something. And it’s ultimately by looking for the word “shit” that we came across this ad. Note also the pretty basil leaves as an illustration choice. Clever, go.

It’s not necessarily the merch as such that is borderline, but rather the impressive number of objects bearing the image of Johnny. There is everything and for all tastes: lighters, duvet covers, mugs, figurines, guitar-shaped tables decorated with the head of the singer and of course, a whole bunch of kitsch masks. than the others. But between us, the more kitsch it is, the more we love it.

Well, there, it is clearly borderline since these advertisements are quite simply illegal. We were not really surprised to find publications concerning the sale of fake sanitary passes, a little more perhaps as regards the sale of IV licenses. The advertisements for “half-price fines” where the “Let’s go to blow his fines” made us laugh. On the contrary, the “paramedic diploma” or false driver’s licenses, much less.

Surprising or not, foot photos are legion on Marketplace. With prices ranging between 10 and 40 euros, many people have seen through Maketplace the opportunity to make a little money. Between us, we expected to find some, but not as many. Also, remind us to clear our search history.

We hoped not to find any, but unfortunately, live animals are indeed sold on Marketplace. From the “baby stick insect” at 50 cents, to the terrariums sold with the snakes, we find a lot of them. It would seem that the law unfortunately remains rather vague on the sale of animals online.

Although after searching for two hours, we couldn’t find any ads for the sale of prescription drugs, we did come across some very weird publications. Between colon cleanses for “prevent and relieve hemorrhoids”miracle solutions for losing weight or even advertisements for “cosmetic surgery in Tunisia”, there is something to laugh about. But the Palme d’or goes to drugs “for men” found everywhere on the platform. You will take a little “cream to enlarge bazookas”no ?

Bonus: A photo of a pigeon

We don’t have much to add to this photo. It’s a gift.

Do not hesitate to send us your best finds on Marketplace at hellokonbinitechno@konbini.com

The 10 most borderline things we found on Marketplace