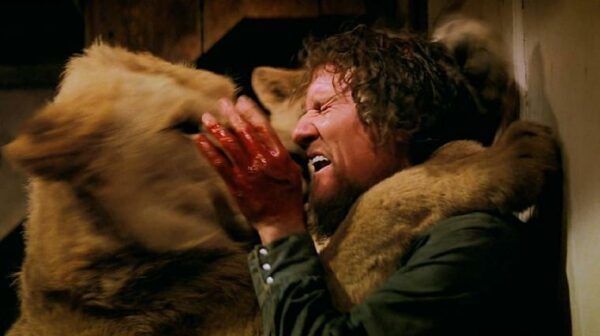 It is not always easy to work in the world of cinema, especially when some directors are ready to put the lives of the teams in danger to obtain the perfect shots… The proof with these 5 most dangerous film shoots (we would have quit from the first day in their place)!

We start our list with this film that you may not know, and which, according to the critics, is not worth watching. Despite its huge flop at the box office in 1981, we could have awarded the Palme d’Or to Roars, in the category of the most dangerous film of the century. In total, no less than 70 actors and technicians were injured on set, and for good reason… The team had to shoot with real wild animals!

It all started when director Noël Marshall got it into his head to make a horror film from realistic scenes. After thinking about his project, the filmmaker adopts more than a hundred big cats in order to breed them for his feature film. On his ranch near Los Angeles, the artist accumulates lions, tigers, panthers and even elephants… A real savannah forms around the artist’s house and he ends up losing control of the situation.

However, nothing stops the director, who always has in mind to produce his film in six months. For the casting, he calls on his family to play the protagonists. Under the eye of the cameras, his wife Tippi Hedren and their three children Jerry, John and Melanie are actually attacked one by one by the animals and the filming takes longer than expected. With the beasts becoming unmanageable and dangerous, the dramas multiply: the director of photography ends up with 220 stitches and Melanie Griffith undergoes numerous surgical operations on her face after being mistreated. Noël Marshall’s project is completed after six years of work, but it experiences a monumental flop, resulting in an immense loss of money for the latter. Since, Roars has the reputation of being the most dangerous movie of all time.

This time, it was underwater that the actors of the film were treated to a few scares. For his thriller Open Water in deep waters, director Chris Kentis chose to shoot his shots in real conditions. Like fish in water, actors Blanchard Ryan and Daniel Travis spent nearly 120 hours in the ocean, surrounded by around fifty sharks that can reach 3.50 meters in length… To attract the giants of the seas , the filmmaking team threw pieces of raw tuna near the protagonists. We let you imagine the scary atmosphere that reigned during filming… Especially since it was impossible for them to control nature, the actors reported having made many unexpected encounters, such as jellyfish. Rest assured, no one was hurt and the film was released in 2003!

In Steven Spielberg’s film, it was not wild animals that gave us a hard time, but rather the mechanical shark that had to be replaced three times, the first two having sunk to the bottom of the ocean. However, the whims of the big beast extended the shooting by a hundred days, putting the team’s nerves to the test. Especially since for his film, the director chose to shoot in the middle of the ocean, on a boat. Only, the cohabitation between the team on such a small surface quickly became chaotic. The actors began to get impatient and to top it off, the weather was not kind, causing the ship to capsize: the boat ended up sinking. The cameras and equipment then found themselves at the bottom of the ocean, but fortunately, the shipwreck did not cause any deaths… After the storm comes the good weather, the film was finally very well received by critics upon its release !

The Lord of the Rings: The Return of the King by Peter Jackson

Surely you remember the epic final battle in the last movie of the Peter Jackson trilogy? This sequence was more than dangerous to shoot since the actors had to run on a minefield… The director explained that he had chosen this particular landscape since it was one of the only almost flat deserts in New Zealand. For the filming, specialized teams were sent by the government to clear all the explosives present on the ground. Before the sequence, the actors were introduced by an officer to the various bombs that could possibly be on the perimeter and received very precise instructions, in the event that they accidentally set foot on one of them. Finally, after a good dose of adrenaline for the actors to shoot in the middle of an area prohibited to the public, the scene took place without incident and there were no injuries.

Tom Cruise is one of the actors who do not hesitate to put their lives in danger for a spectacular scene. On the set of mission impossible 7, the film’s stunts were particularly dangerous to perform. The actor however did not hesitate to produce himself a perilous jump: to throw himself from the top of a cliff on a motorcycle, then to finish the action by parachute. To prepare for this dangerous scene which could have cost him his life, the star underwent intensive training for several years based on parachute jumps and motorcycle jumps.

The 5 most dangerous film shoots of all time

Gard rhodanien: On view at the Bagnols-sur-Cèze and Pont-Saint-Esprit cinemas, from Wednesday 5 to T...
On your screens…“Love”, “The origin of the world” and others
Jacques-Yves Cousteau, Maurice Herzog and Paul-Émile Victor, the three visionaries of the adventure
Tweet
Share
Share
Pin
Other links: https://awardworld.net/resources/