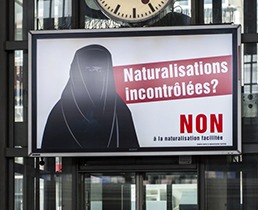 Often associated with the extreme right, brain manipulation inspires other parties and campaign arguments become a veritable jungle. Is this the future we want for our democracy?

The policy consists of identifying the changes that our society needs and proposing concrete solutions to improve the daily life of each and everyone, in the medium and long term. Often, the ideas of some arouse the opposition of others. Such is the political life, based on a healthy representation of the people and opinions.

These battles of ideas make it possible to find the right balance. Subjects submitted to vote are an illustration of this: when elected officials cannot agree on a proposal (and provided that a referendum is signed by 0.6% to 3% of the population1), it is up to the people to decide.

And this is where the games of influence begin. Political parties, associations and interest groups try to convince the people to sign such a popular initiative, such a referendum and then, when the time comes, to cast their precious vote in the ballot box.

And the more an opinion is in the minority, the more it risks being represented by misleading arguments. Some do not hesitate to arm themselves with ignoble weapons to lure the least educated into their net.

We remember the campaign against simplified naturalizations where the UDC created controversy with its amalgam of veiled Muslims (position rejected), or even the scandal where the same UDC diverted remarks by Micheline Calmy-Rey against her will to promote the so-called self-determination initiative (position rejected) that she was fighting. The justice initiative, which sought to raffle federal judges, implied that our federal judges were not independent (position rejected). As for the votes on the Covid laws, they evoked the deprivation of liberty and usurped the identity of the newspaper Le Temps (positions rejected). 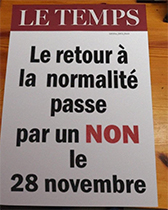 Currently, the extreme left sums up Switzerland’s participation in the Schengen area with a shocking phrase: “To die in the Mediterranean”. It implies that voting yes to the Schengen acquis amounts to sending human beings to die at sea! 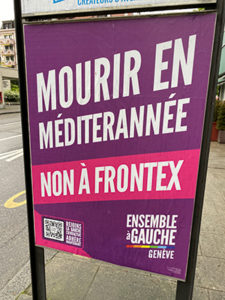 Convince at all costs

In this hunt for votes, low blows have unfortunately become commonplace and this is why the titles of popular initiatives sometimes no longer mean much.

In this register of deviated titles, the palme d’or goes to the UDC Genève which recently launched its initiative “Yes to the recycling of non-biodegradable waste” to speak, in reality, of waste not recyclable that it intends to send to landfill in France rather than treating our bottom ash2. This is the first time that the SVP has taken an interest in Europe and cared about the environment. But above all, pretending that bottom ash is waste that can be recycled is misleading and highly touted. Now, that’s certainly more of a seller than “I don’t want clinker in my garden”!

Of course, we all put a lot of emotion into the convictions we defend and the ideas that are close to our hearts. But we have the choice to be honest with the people or to knowingly want to deceive them. And if some parties do not hesitate to cross the line, the Green’liberals are resolutely committed to defending their ideas with respect and honesty, in as factual a manner as possible.

Thus, our cantonal initiatives are worded explicitly: “For the abolition of lifetime pensions for State Councillors” and “For parental leave now”. Our campaigns are also clear, even when the emotional mixes with the factual: “Education issues cannot be solved with the wave of a magic wand” (CO22), “Schengen, an opportunity for our economy, our security, our freedoms” (Frontex), “In Switzerland, smoking kills 9,500 people and costs 3.9 billion a year” (Tobacco advertising), “Let’s put an end to a privilege from another time” (Rentes à vie), “Our identity is not for sale” (e-ID).

These examples show that a policy without blows and with respect is possible. And that the majority of the electorate is interested in the issues and is not fooled: proof of this is the number of cases where these shameful speeches only foam but do not influence the majority who oppose these ideas.

2 For simplicity, the household waste of Genevans is incinerated at Cheneviers. Everything that has not been burned (porcelain, minerals, metals) is sorted in order to recover what can be. The residue, called clinker, cannot be recycled and must be stored in landfill, after taking care to isolate the soil so as not to contaminate it. The Châtillon landfill having reached saturation, Geneva must find a new place and it is an understatement to say that no one wants it in their garden. For fear that land in Satigny will be retained by the Council of State, the UDC Genève intends to prohibit the creation of a new landfill in the canton and prefers to outsource our bottom ash to France.

The art of political manipulation