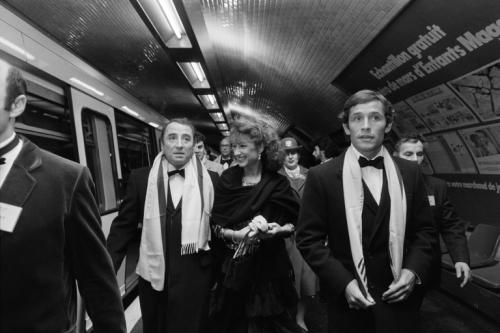 One year after the crowning of “Adieu les Cons” by Albert Dupontel, what will be the films in the running for the Césars, the most prestigious prizes in French cinema, at the end of a year in which French cinema triumphed in festivals but suffered in theaters?

The Césars unveil the nominated films and artists on Wednesday. Once published, the 4,363 cinema professionals who are members of the Academy will have one month to vote and decide between them, in 24 categories.

A total of 171 films are in the running, released between the reopening of French theaters at the end of May and December 31.

The games seem very open, voters being able to put forward films as different as “La Fracture”, by Catherine Corsini, who examines, for a night in the hospital, the divisions of France at the time of the “Yellow Vests”, “Les Olympiades”, a black and white romantic comedy by Jacques Audiard, a regular on the charts, or even “Lost Illusions”, an ambitious adaptation of Balzac by Xavier Giannoli.

Some films have been hailed by both critics and the public, such as “Aline”, Valérie Lemercier’s biopic about her idol Céline Dion, in which the actress gives the best of herself, which should logically find his place in the nominations.

Others succeeded despite the period to fill the rooms, such as the thriller “Boîte Noire” (one million admissions), with Pierre Niney as a paranoid air traffic controller, or “BAC Nord” (2.2 million admissions ), whose vision of the cities of Marseilles has caused much ink to flow.

Renewed to respond to accusations of opacity, inter-self and machismo, the Académie des César could also show that it has changed, by naming more films made by women.

A filmmaker received the César for best achievement so far, Tonie Marshall in 2000.

An imbalance that is a task after a year 2021 marked by the triumph in the biggest festivals of two French women: Julia Ducournau, Palme d’Or in Cannes for “Titane”, then Audrey Diwan, Lion d’Or in Venice with “L’ event”, punchy film about abortion.

Beyond the symbols, these nominations could act as a consolation prize for certain films, whose careers are hampered by the health crisis, such as the rock opera “Annette” by Leos Carax, or the fresco on war and madness “Onoda” and the thriller “Night Doctor”.

For the Academy, the nominations are the home stretch before the 47th official ceremony on February 25.

The moment is still eagerly awaited by the world of cinema, but from scandal to flop and outbursts, the latest editions have shown a growing gap with the general public. Disenchantment also experienced by other major ceremonies abroad, also hit by the pandemic, such as the Golden Globes, ousted from TV.

A fate which the Césars escape: Canal +, which from this year gives way to the Cannes Film Festival to Brut and France Télévisions, has renewed its partnership with the Academy until 2025.

After a ceremony which had combined last year’s audience flop (1.6 million spectators) and a torrent of criticism on a world of cinema multiplying recriminations in the midst of a pandemic, the organizers bet on a safe bet, Antoine de Caunes , a great regular at the exercise, as master of ceremonies.

Australian star Cate Blanchett, twice Oscar winner and committed to the environment and feminist struggles, is to receive an honorary Cesar for her entire career.

The Caesarized will also have a thought for the great disappeared of the year, Jean-Paul Belmondo, to whom the Academy pays tribute by dedicating its poster to the couple he forms with Anna Karina in “Pierrot le fou”.