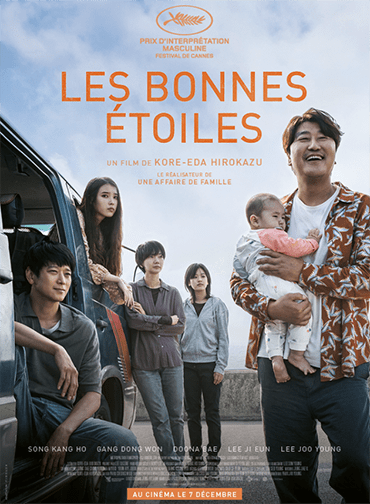 After having shot in France, in 2018, “The Truth” (with Catherine Deneuve and Juliette Binoche), this time it is in Korea that the Japanese director Hirokazu Kore-eda went to direct “The good stars”, with Korean actors , including the famous Song Kang Ho, a huge star in his country where he has toured with all the greatest filmmakers.

It must be said that in Korea the problem of the abandonment of babies is even more acute than in Japan and that there are even more ” baby boxes which allow all the desired discretion. In Europe, in the Middle Ages, they were called “towers of abandonment”. Now, in France, a mother can “give birth under x” and remain completely anonymous.

During a night of torrential rain, a young woman abandons her baby, but sees that it is two traffickers who appropriate it to profit from it with couples in need of children.

Staying at a distance to observe, the mother understands the scheme and slips into their vehicle in order to have her share of money and to check the quality of the adoptive parents.

So begins a real adventure film which is far from Koré-eda’s best. We do not find the pangs of heart that caused ” Nobody knows » where a mother left leaving her little girl to raise her young brothers alone, nor the emotion that this father felt when he discovered that the son he had tenderly raised was not his in « Like father, like son » (2013), or again, in A family matter (Palme d’Or 2018), this little girl gathered in an extremely blended family, where she finds a tenderness unknown until then…

It is always about family stories in a very broad sense of the term: families that we invent, that we tinker with, with more or less imagined, but nevertheless solid links. Links that the spectator discovers little by little and often with surprise. The family remains Hirokazu Kore-eda’s favorite theme with the most extravagant situations at times and which offer the spectator a multitude of joyful situations.

This time it is from the angle of adoption that he talks about the family: why does a woman end up abandoning her child? why does a couple seek to appropriate a neglected child? what role do orphanages or other makeshift institutions play?….

” The lucky stars » seemed to us more plan-plan than the previous films of Hirokazu Kore-eda, even if the adventures there are more spectacular than usual and even if this small community of traffickers is endearing and unusual to say the least. He seems to lack the usual quality of emotion in this director. He takes his time to divulge a few surprises which, despite everything, amaze us and we accept the unacceptable.

The interpretation is excellent with the best Korean actors: first Song Kang-ho, already mentioned, who obtained, at the last Cannes Film Festival, the Best Actor Award for this role. While we would have gladly granted it to Benoit Magimel in “Peace” byAlbert Serra or at Pierfrancesco Favino in “Nostalgia” by Mario Martone (2 superb films that left Cannes empty-handed, and which would have deserved a spotlight).
Admittedly, Song Kang-ho is as always amazing, and he is masterfully surrounded by Gang Dong won, Doona Bae, Lee Ji Eun, Lee Joo Young… All the cream of Korean cinema!

“The Lucky Stars”, by Hirokazu Kore-eda