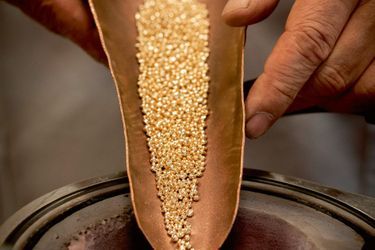 Since 1998, the Swiss jeweler Chopard has been making the famous Cannes Film Festival gold trophy. Originally, a meeting of cinephiles.

The story could have ended at a dinner that no one would have remembered. Twenty-four years ago, Caroline Scheufele, co-president of the Chopard brand, opened a boutique opposite the Palais des Festivals in Cannes. The one who defines herself as a “lover of the seventh art” would like, on this occasion, to organize a dinner during the event. She asks permission from Pierre Viot, then president of the festival.

“At first, he thought I was working in communications, remembers Caroline Scheufele. I asked him who the partner jeweler was and he replied that there was none. Behind him, in the library, was the Palme d’Or trophy. It was made by an anonymous workshop in Paris. I explained to her that my job was to create jewellery, that Chopard would love to be the jeweler partner of the Cannes Film Festival, that diamonds were a key element of glamor on a red carpet. And that I could also give him a makeover for his Palme d’Or…”

The young woman has a hollow nose. Viot accepts the proposal. Not only will Chopard attach its name to the most publicized event in the world after the Olympic Games, but Caroline will return to Geneva with the trophy under her arm. “When my brother saw me arrive at the factory, trumpeting that I was going to redesign the Palme d’Or, he called me crazy!” she says.

It must be said that one of the most prestigious awards in the world of cinema needed it. The trophy was gold-plated, mounted on a pyramidal Plexiglas. The leaves of the palm were flat “as if a car had run over them”… Chopard breathes volume and movement into the 19 leaflets of the branch by articulating them around a stem whose end is in the shape of a heart, a wink to the symbol of the jeweler. The gold plated is replaced by 18 carat gold while the Plexiglas base is abandoned in favor of a rock crystal block. In May 1998, the Palme d’Or and four other prizes awarded during the closing ceremony were produced for the first time in the high jewelry workshop of a well-known brand. This trophy becomes the most coveted jewel on the Croisette.

Although its design has not changed for almost a quarter of a century – except for the 70th anniversary of the Festival for which it is set with 167 diamonds – the Palme turns green in 2014. That year, Chopard decides to crafted in ethical gold, certified “Fairmined”. The rock crystal comes from Austria. “To compensate for unforeseen events, we always make two Palmes d’Or that we send to Cannes separately months in advance,” says Caroline Scheufele.

It takes about three weeks to achieve the ultimate reward. It was born in the large Geneva workshop of the label. Five artisans are involved in its manufacture. The gold is first melted on site and then poured into a mold where the trophy has been shaped in wax. This technique known as “lost wax casting” makes it possible to obtain, after the wax has melted during passage through an oven, a golden branch. It is then deburred, cleaned, polished from every angle and fixed on its rock crystal cushion, ready to be awarded. By arousing as much joy as emotion. Witness these words of Bong Joon-ho when he was rewarded for his film “Parasite”, in May 2019: “I can’t believe that the naive and reserved 12-year-old boy that I was, who dreamed to become a director, touches the Palme d’or with his own hands! It is something invaluable to me. »

The palm of jewelry