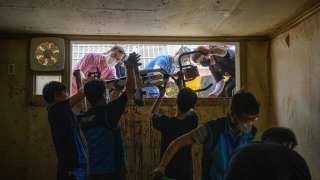 Seoul residents clean a basement apartment after flooding on August 11, 2022.

SOUTH KOREA – The “Banjiha”, these tiny basement dwellings widespread in the city of Seoul will soon disappear. The authorities took the decision this tuesday august 9 to banish these dangerous and precarious dwellings, after three people drowned in one of them.

The torrential rains that fell on South Korea took prisoner two sisters in their forties, and a 13-year-old child identified as the daughter of one of them. They all three died on Monday, August 8, during the heaviest downpour Seoul has experienced in 115 years.

These apartments were infamously made famous by the movie Parasite by Bong Joon-ho, who won the Palme d’Or at the Cannes Film Festival in 2019, and the Oscar for Best Picture in 2020. In the feature film, the main characters, all part of a poor family and at the unemployed, live in one of these apartments.

Often occupied by a population with few means, they symbolize the growing inequalities in South Korea. These record rains proved that in addition to that, they put the tenants in danger.

The victims, who lived in the Gwanak neighborhood, called for help and tried to escape, ” but the water filled the room in seconds a neighbor told the Yonhap news agency. Their lifeless bodies were found after firefighters finished draining the apartment.

A family of three, including a 13-year-old girl, drowned in their semi-basement home when flooding struck Seoul. H… https://t.co/s0bNEWbkfH

South Korean President Yoon Suk-yeol visited the scene of the tragedy and apologized to residents there. From now on, the city of Seoul will no longer grant building permits for these dwellings, and the already existing dwellings will be converted to other functions. with time.

Impressive images of these bad weather have circulated on social networks, showing flooded streets and metro stations. The rains led to power cuts and the evacuation of many residents.

Eleven people were killed during the torrential rains, and eight others are missing.