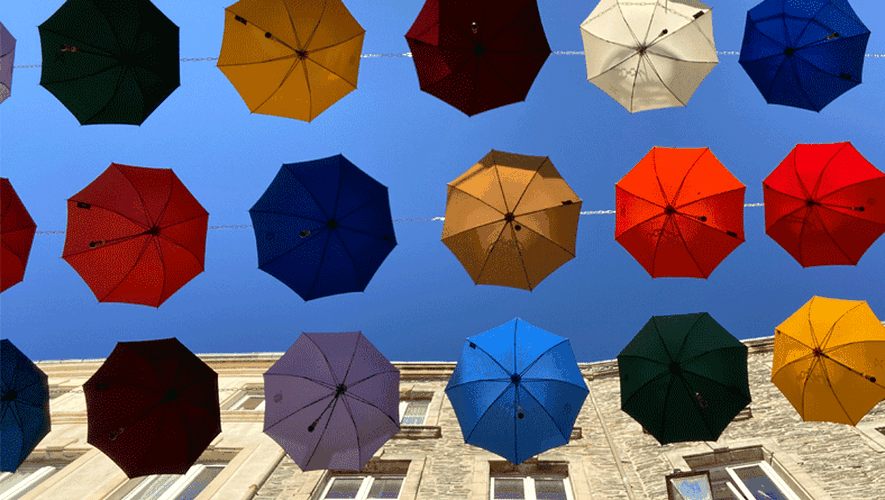 Manufacturer of umbrellas for more than 35 years, Le Parapluie de Cherbourg attracts a French and international clientele and now focuses its development on transmission. Portrait.

In 1964, the French discovered the first steps of the very young Catherine Deneuve under the gaze of Jacques Demy in the film “The umbrellas of Cherbourg”. Crowned with the Palme d’Or at the Cannes Film Festival the same year, the film enjoyed immense critical and popular success, theatrical adaptations in New York and Paris, but also a more concrete adaptation within the city of Cherbourg itself.
23 years after the creation of the work that has become iconic, Jean-Pierre Yvon, globetrotting photographer smells the good vein. “Jacques Demy’s film was known all over the world, however there was no brand as such “, says Charles Yvon, son of the founder of the Umbrella of Cherbourg. Returning to his hometown in Normandy, Jean-Pierre Yvon decided to create the brand “Le Veritable Cherbourg”a company specializing in the manufacture of umbrellas.

A company sheltered from the clouds

After collaborating with a subcontractor, Jean-Pierre Yvon decided to open his own factory in 1994. “Quality was less and less present in the manufacture of umbrellas. So my father restructured the business so that it could accommodate a workshop “, says the founder’s son, who joined the company ten years ago. Driven by the success of the film and the growing appeal of Made in France products, Le Parapluie de Cherbourg quickly exported to Japan where he settled down in the mid-1990s. Unlike many companies which, at that time, relocated their production en masse, Le Veritable Cherbourg relocated. An approach that will be welcomed in 2020 when the ParaPactum, a shield umbrella worthy of the best James Bond, enters the Elysée Palace to ensure the protection of the President of the Republic Emmanuel Macron.

In 2018, when Charles Yvon bought the company, it did not have “fire financial health”. Never mind, Charles Yvon, accompanied by a dozen committed and passionate employees, is embarking on this major challenge. In just six months, they will expand the order book through business development and make know-how the added value of their products. In March 2020, the manager made another major change: the name of the company changed from “Véritable Cherbourg” to “Parapluie de Cherbourg”.
With more than 20,000 umbrellas made per year, two shops in Cherbourg, 60 retailers in France and distributors in Japan, South Korea and Benelux, the company now seems sheltered from the storm. Nonetheless, this living heritage company do not forget its duty of transmission. “We want to be very present in the media, whether on television or in press articles in order to share our know-how. The younger generation attaches great importance to working for a brand that communicates and speaks with conviction. I also think that our employer brand echoes for this generation in search of meaning, and it shows in the number of applications we receive each month. “.
Concerned about the preservation and enhancement of a unique know-how, Charles Yvon recently undertook major projects for the entire museography part of the company. Workshops open to the boutique, cinema, exhibition space for collaborations, space for creating your own umbrella or even a tea room, will therefore soon be accessible to visitors.

The Umbrella of Cherbourg, when cinema comes to life