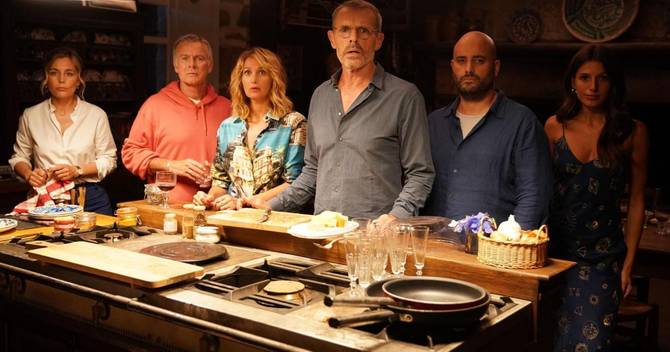 Some time ago we told you about super expensive movies and we don’t understand why. Today, we continue to tarnish these rotten big-budget films a bit by comparing them to other films of the same budget where it seems to us a little more deserved.

Be careful, we chose to compare French films (or at worst European ones) between them because the economy of our cousins ​​from the Outer Atlantic in terms of cinema has so much nothing to do with ours that it wouldn’t really make sense. to put them side by side. In the same way, we tried to draw from rather recent films because 20 years ago it was not the same semolina (this expression does not exist but I try to fit it into the dictionary).

No but let me laugh. The first is behind closed doors filmed in Brittany with a handful of big asses screwed on their chairs eating a barbeuk for a weekend, on the other we have a comedy in which Jérôme Commandeur takes off at Greenland and survives bear attacks. So personally I have not seen Irreducible, I don’t know what it’s all about (although a film with Laetitia Dosh can’t be fundamentally bad) but I allow myself to perhaps think that with an equivalent budget we get a little more for our money than Lambert Wilson who eats ham rind. And I say that in friendship for Lambert Wilson. And for the ham rind.

On the one hand we have a rather ambitious adventure film for French cinema which tries to offer us something a little different and on the other one has Bedos and his super bourgeois films where nothing happens which gives us exactly the same budget. Go figure.

What the hell have we all done? (20 million) and Lost Illusions (18 million)

OK, I’m cheating a bit, we’re not talking about exactly the same budget, but just to give you an idea of ​​what shitty films can be made with excessive dough. Funny thing to take up with the dark history of the saga What the hell have we done?!, is that each film has seen its budget grow while dividing its entries by two. Funny no? As for Lost Illusionsadmittedly a big-budget film, it is nevertheless an extremely well done historical epic that deserves a little more its weight in gold.

Kompromat and A beautiful race (8 million)

The first is a secret agent story that takes place partly in Russia and the second is just Dany Boon who takes an old granny in a taxi, can someone explain to me what the hell is this budget busted ass?

If I allow myself to compare this film to you, certainly not French, it is because it benefited from a mainly European production. In short, we have on one side a Palme d’or filmed partly on a yacht, then on a desert island, an abominable vomit scene, 3 hours of absolutely mind-blowing film and on the other well, we have a film with Palmashow guys. I like them a lot huh. But 9 million. Are your pants diamonds or koua?

Not that I have a love for the world of Kaamelott (the next one who proudly releases one of Kaamelott’s cult replicas, I make him eat the DVD of Alexandre Astier’s show without asking him for his rest) but we are still sure another kind of film than Christian Clavier, which makes Christian Clavier in a villa. OKAAAAAAAY?

OK. I’ll stop you right away, I’m not here to defend Luc Besson and even less his films, especially this one. BUT LET’S BE HONEST, between a cast of old-fashioned actors spending holidays together in Sardinia and Luc Besson’s bazooka-filled blockbuster, how did we manage to get the two to end up with a similar budget (we’re not more than 3 million)?

Well then I know that some campsites are expensive huh. But overall. Good. Between us. 23 million to see Antoine Duléry in his underpants when we have a film shot in the open sea with breathtaking diving scenes and Lambert Wilson not in his underpants?

Yes sometimes I am in bad faith. So what ? Do you really think I’m paid to be objective? HANDCUFF ME.