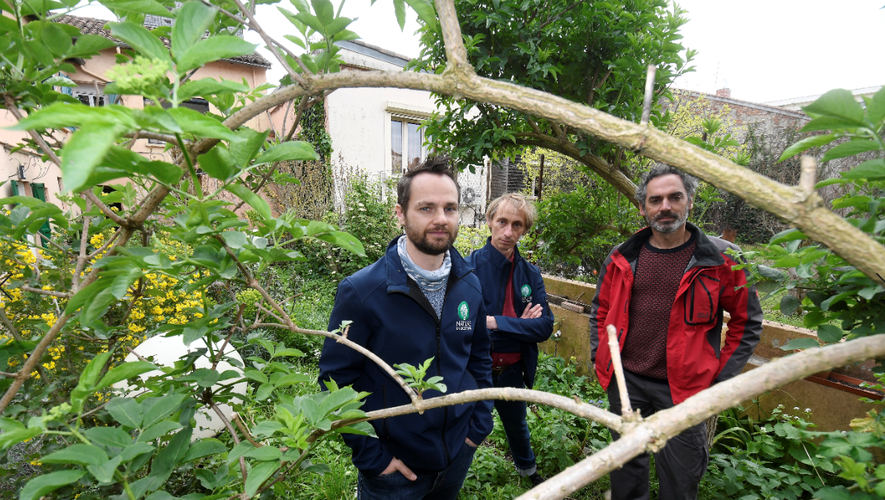 the essential
Nature En Occitanie invites Toulouse residents to open up their garden to identify its treasures and preserve them. And understand their role within the urban ecological fabric.

Four years ago, there was nothing in the hidden garden of this condominium on Grande rue Saint-Michel, in Toulouse, but a well-mowed lawn and a palm laurel hedge. Today, abundant vegetation has taken the place, where wisteria, fig tree, euphorbia, borage, iris, wallflower, celandine, coronilla, rosemary mingle, in complete harmony… But also nettles, bear’s garlic, stellaria, bedstraw , fumitory… “We arrive at this result very quickly, you just have to use the right species and make the right associations depending on the soil, the exposure”. The speaker is Pierre-Olivier Cochard, naturalist at Nature En Occitanie (NEO), gardener with golden hands and resident of this residence. His idea was to “saturate the space with a place for each plant, without it taking over the others. The result is spectacular. “The garden is unrecognizable. Magnificent, wild and colorful,” rejoices Christian, a resident of the condominium. It is even an example of biodiversity.

It is precisely to promote biodiversity in the city that Nature En Occitanie has just launched “Treasures from my garden in Toulouse”. The interest of this operation “is to show that in the city, there are small private green spaces that can give way to abundant biodiversity, where wild and ornamental plants coexist. These spaces are often very interesting, especially in terms of food resources for pollinators,” says Mickaël Nicolas, the project coordinator.

To begin with, residents of Toulouse who wish to take part in this experience are invited to draw up an identity card for their garden. “We have set up a form on the internet. Gardeners can indulge in participatory surveys and discover the species that live in their homes. In some neighborhoods, naturalists will even be able to travel for more in-depth inventories of species that people would not be able to recognize. The objective is to capitalize on as much data as possible”, continues Mickaël Nicolas.

Boris Presseq, botanist at the Museum, is delighted to take part in this operation. “At the Museum, we have been working on the wild flora and fauna of cities for some time. There we will access the private intramural gardens. We will discover spaces like that of Pierre-Oliver, maintained by nature lovers. The interest is twofold: to show that aesthetically, it is a great success and that these wild species are able to adapt to our urban planning constraints”, explains the botanist.

NEO therefore invites residents of Toulouse to open up their garden “so that we can show them the treasures they have and preserve them over the long term so that nature in the city has its place”, concludes Mickaël Nicolas. Let yourself be tempted, it will be very instructive!

Toulouse: they help you identify the treasures of your garden