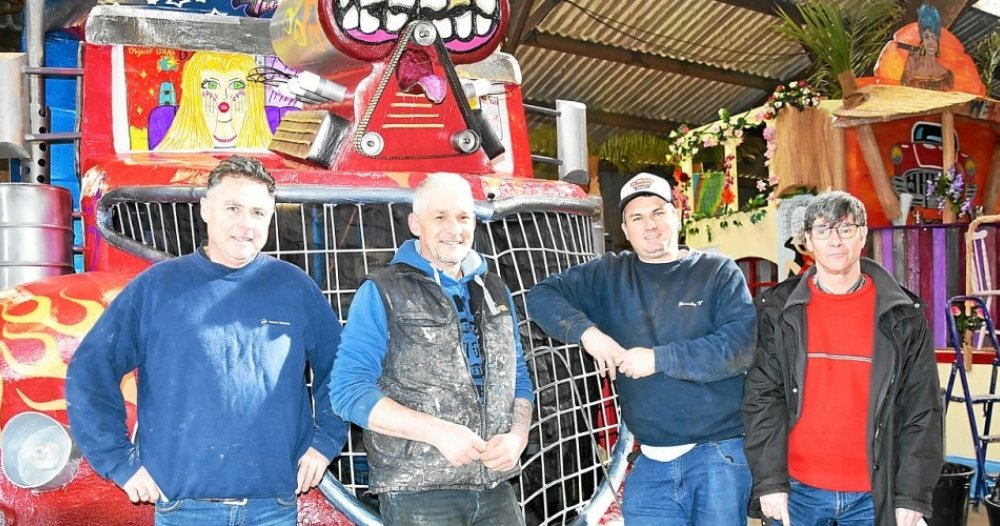 
Can we imagine a boss elsewhere than in Douarnenez receiving such an excuse for an absence: “I’m making a float for the Gras parade”? Or more simply “I’m fat”, with all the difficulties that implies having the head, or the body, at work. “No need to say more, the companies here know the trick, it’s probably different for those who work in Quimper, for example”, laughs Christophe, one of the leaders of the Tocards, a group of 25 friends mobilized each year on a tank. Sébastien Le Hénaff, several times winner of the Lulu d’Or, the carnival’s golden palm, took two weeks off for the occasion. “One week to finish preparing, one week to enjoy: things are clearer, like that,” he exclaims in front of the new masterpiece he is building in the Gras Committee hangar.

“To say that we are looking forward is a bit weak”

Like all Douarnenists, he is eager to find, on Saturday, these five days which rock the city in a tasty mix of anything and everything grandiose. The absence of edition in 2021 for health reasons was experienced as a tragedy. Oh, on a Saturday a few hundred people happened to find themselves, by pure coincidence of course, in disguise at the same time on the downtown market. A delicious coincidence that had offered a beautiful morning of celebration, but above all a taste of too little.

The meeting of 2022 finds its fullness, between the enthronement, this Saturday, of the king of the carnival, Den Paolig, and his incineration on the port Wednesday evening. The big night on Saturday, the Noce des Gras and the parade on Sunday, the waiters’ race, the ball on Tuesday evening… Impatience grew. “The simple pleasure of trying on a costume, hearing the others laugh while talking about the delirium of another group, seeing that it sparkles in everyone’s eyes: to say that we can’t wait is a bit weak”, describes Christophe . Since the beginning of January, he has spent all his evenings around the tank, sometimes until 2 am. “At home, we are bored, this is where we want to be, to weld, glue, decorate together,” he slips.

The health constraints have not all been lifted, and the challenge for the organization this year is the control of the vaccination pass. On Saturday evening, security guards or volunteers will check them at the entrance to the bars. “It is the only constraint, it must not make us forget that the party is back”, rejoices Mickaëlle Jadé, the president of the Gras committee, who announces twelve floats and between 600 and 700 participants in the parade on Sunday.

Douarnenez is about to switch. Since Thursday evening, one of the Gras clans, the terrible Sanchez, has been selling an 11° beer brewed at the La Pinte du Raz company, “with merguez sausages”, they specify. Rival groups like the Calvez (known for their rather full-bodied Café Calvez) and the Merguez (an unreassuring security agency) promise a response to match. Laughing fights are not excluded. Already prepare the words of apology to the boss: “I tasted the Sanchez too much”.