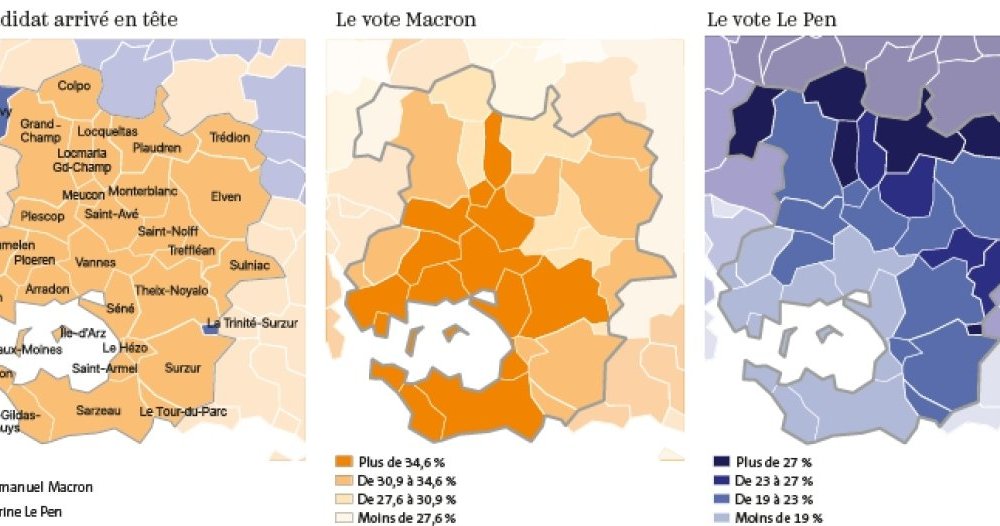 Once again, the island of Arz is the commune of the agglomeration where we moved the most for this first round of the presidential election. As for the legislative elections of 2017, where she had been distinguished with a Marianne d’or civics for the highest participation in the department, the participation rate is 86.09%. Arradon is not very far away with 84.07%, closely followed by Le Hézo and its 84.06%.

The Islanders and the Ildarais voted for Emmanuel Macron. They placed the LREM candidate in the lead at, respectively, 51.05% and 45.14%. Arradon and Arzon follow closely with each 43.40% of the vote.

It is in Plaudren that Marine Le Pen has her best score in the agglomeration (29.52%), almost on a par with Trédion (29.51%). The leader of the National Rally comes first in two municipalities: Brandivy and La Trinité-Surzur, where nearly one in three voters gave her their vote. It is in the islands that the far-right candidate received the fewest votes. On the Ile-aux-Moines, it achieves only 7.19% of the votes and on the Ile d’Arz 6.90%.

Séné, Arradon, Baden, Le Bono, Larmor-Baden, Saint-Nolff… All these communes of the agglomeration placed Jean-Luc Mélenchon in second position during the vote of this Sunday, April 10. The palm goes to the municipality of Bono, where the leader of La France insoumise gains more than five points compared to the 2017 election and totals 23.34% of the vote. It also exceeds 20% in Saint-Nolff (21.65%) and achieves 18.73% in Séné.

Sarzeau, the town of David Lappartient, president of the departmental council, and member of the Les Républicains party has turned away from the party of its former mayor. Where François Fillon had won 29.39% of the vote in 2017, Valérie Pécresse only won 6.93% and came in fifth position. Conversely, the municipalities where Pécresse was voted the most are Arzon with 10.63% and Île-aux-Moines with 10%. She arrives there respectively in 3rd and 4th positions.

The two communes of the agglomeration where the candidate Éric Zemmour comes first are Saint-Gildas-de-Rhuys with 8.93% of the votes and Arzon with 8.87%. The first placed the far-right candidate in fifth position, behind Macron, Le Pen, Mélenchon and Pécresse. Same quinté at Arzon. In third position, for the municipality having voted the most Zemmour, Larmor-Baden with 8.80%.

The Vannes agglomeration is greener than Yannick Jadot’s 4.58% nationally. The environmental candidate even passes the 10% mark at Hézo (10.26%). He achieved his two other best scores in municipalities on the edge of the Gulf: Le Bono (9.25%) and Saint-Armel (8.95%). Although left behind in the score, he slips into 4th place in 21 of the 34 municipalities of the agglomeration.

Vannes – How did we vote in the agglomeration of Vannes?