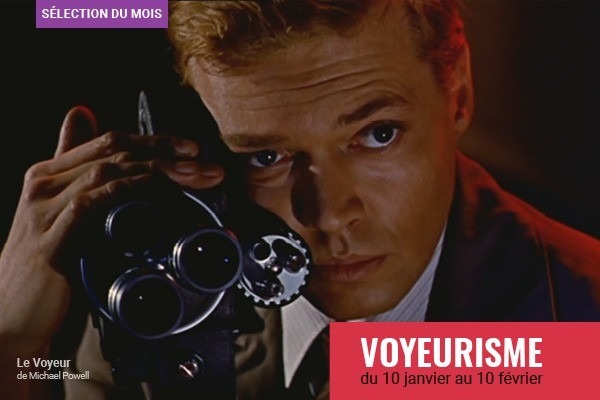 A bit of a voyeur, the movie viewer certainly is. The monthly selection of LaCinetek therefore has all its legitimacy, since it offers you at the beginning of the year 2022 and until Wednesday February 9 inclusive, ten films on voyeurism in the broad sense. These film studies are all pretty sick. But how could it be otherwise, when the gaze ventures where it should not go: on the side of intimacy and the suffering of the other? You are therefore warned of the radical change of register compared to the comic cycle of December. Which should in no way prevent you from observing, from France, Belgium and Luxembourg, these cantilevered characters with discretion.

Fortunately, there is no sign of inflation in terms of subscription price to LaCinetek, the mode of operation of which remains unchanged. For less than three euros per month or thirty euros per year, you will have unlimited access to the selection of the month on its site. And to give you even more desire to take the plunge and subscribe permanently, be advised that the next cycles are also worth taking a close look at. Thus, you will find on the platform founded in 2015 by Pascale Ferran, Laurent Cantet and Cédric Klapisch, next month a cycle “En train” with films by Abel Gance, Alfred Hitchcock and Jean Renoir, then in March a tribute to the brothers and sisters, brought together by, among others, Ingmar Bergman, Akira Kurosawa and Mike Leigh.

Otherwise, in the same way in the news of the platform on the video on demand side, LaCinetek has brought together since the beginning of the month a program dedicated to the pioneers of cinema, including the directors Germaine Dulac and Alice Guy. In two days, on Thursday January 20, a John Travolta focus will allow us to review three key films from the actor’s career: Saturday night fever by John Badham grease by Randal Kleiser and pulp Fiction by Quentin Tarantino. And director Nicole Garcia – pretty unlucky at the box office recently with her latest film lovers – will present you his list of bedside films, on which appear among others Tess by Roman Polanski and My favorite season by André Téchiné.

These are mostly French dirty stories that clash on the list of this cycle, assembled with as much care as ever by the LaCinetek selectors. Since the cinema of the immediate post-war period with the oppressive Panic from Julien Duvivier to the percussive Hidden by Michael Haneke, from which we still haven’t completely recovered, even fifteen years after its release, national productions shine there indeed by their ill-intentioned state of mind. Unfortunately, unsurprisingly, it is often men who are the source of voyeuristic intrusion, by Michael Lonsdale in the funny documentary A dirty story from Jean Eustache to Michel Blanc in Mr Hire by Patrice Leconte, to the detriment of the female characters, the poor Romy Schneider in the lead, exploited and undressed with a look in quick succession by the directors Andrzej Zulawski and Bertrand Tavernier.

The camera plays an even more essential and inquisitive role in the four foreign films of the monthly selection. In Poland, at the time of the socialist leaden screed, the fact of having a small camera does not bring much luck to the protagonist of The Amateur, the second fiction film by Krzysztof Kieslowski. As for the titled film par excellence The Voyeur, his treatment of voyeurism far ahead of his time had resulted in the early 1960s by the almost definitive end of the career of the legendary Michael Powell. Exactly the same year, the great Fritz Lang had also bowed out, with a German thriller that probably did not live up to his previous treatment of the enigmatic figure of Doctor Mabuse.

Finally, the prestige gained from the outset thanks to the Palme d’Or won by Sex lies and video, Steven Soderbergh’s first film, had up to now supported the career of this prolific and unpredictable director.

The “Voyeurism” selection of the month of January 2022

The Amateur (Poland / 1979) by Krzysztof Kieslowski, with Jerzy Stuhr and Malgorzata Zabkowska

Hidden (France / 2005) by Michael Haneke, with Daniel Auteuil and Juliette Binoche, Best Director Award at the Cannes Film Festival in 2005

The important thing is to love (France / 1975) by Andrzej Zulawski, with Romy Schneider and Fabio Testi, César for Best Actress to Romy Schneider in 1976

Sex lies and video (United States / 1989) by Steven Soderbergh, with James Spader and Andie MacDowell, Palme d’or and Best Actor Award to James Spader at the Cannes Film Festival in 1989

A dirty story (France / 1977) by Jean Eustache, with Michael Lonsdale

The Voyeur (United Kingdom / 1960) by Michael Powell, with Karlheinz Böhm and Moira Shearer