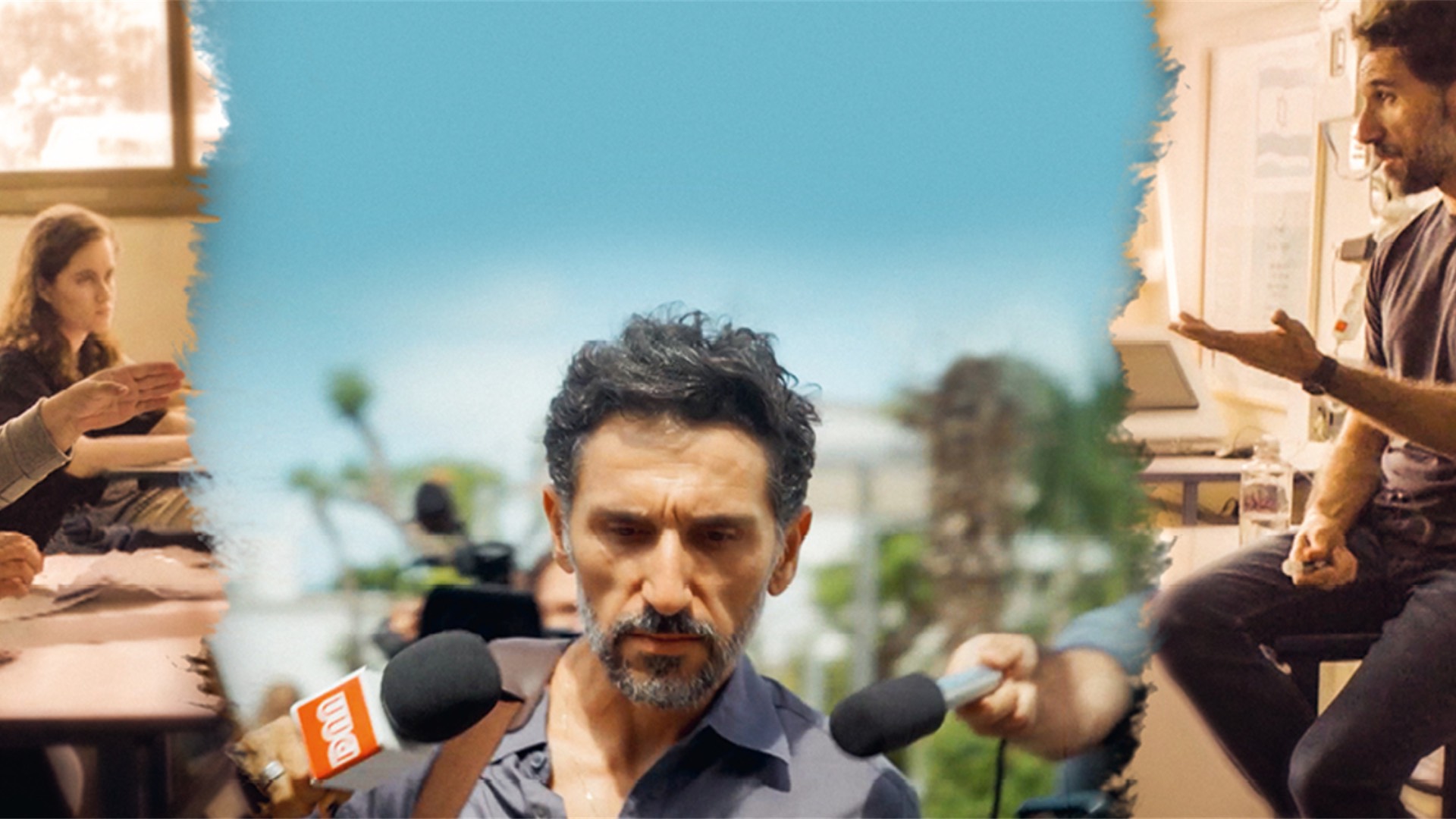 The first program to compete in Canneséries season 5, The Lesson proves the great mastery of its creator, who made an impression from her first attempt. Powerful and visceral, The Lesson gnaws to the bone, until you’re left with nothing but 1000 questions to ask yourself.

Canneseries season 5 kicked off on Friday March 1, to loud applause from a crowd of enthusiasts, in the great hall of the Louis Lumière auditorium.

To kick off the festivities with great fanfare, awards were presented to actress Sydney Sweeney (Euphoria) for her entire young career, and to Gillian Anderson (Sex Education) for his vast participation in the world of television, during the opening ceremony of season 5 of the event.

The jury, chaired by Fanny Herrero, presented its tributes to a crowd eager to swallow a maximum of images in a minimum of time.

And to launch this international competition which takes place from April 1st to 6th, the festival has chosen the series The Lessonan Israeli program from which we emerged deeply troubled.

The Lesson, the political series we’ve been waiting for

You remember Between the walls, who won the Palme d’Or in 2008? Well the concept of The Lesson is more or less the same. A thousand times more violent.

In a high school class in Israel, a 43-year-old liberal and anti-army teacher (incredible Doron Ben-David) talks with his students. One of them, Lian (amazing Maya Landsmann), says that while going to the swimming pool the day before, she and her girlfriend were sexually harassed by Arab people.

Very quickly, the young woman makes racist remarks, condemned by her teacher, who pushes her class to think more about her remarks.

Except that the professor, too, goes beyond the limits, half-word comparing his students to Nazis.

Lian therefore publishes, thinking of getting his teacher fired, a video on TikTok, denouncing Amir’s actions. Amir, for his part, loses control in the playground when he surprises Lian taking pictures with a firearm, lent by a member of the Israel Defense Forces.

Between the teacher and the student, the moral break is consummated, and the two will train in an infernal spiral of denunciation which will modify their lives in depth.

We promise you, The Lesson is one of the programs from which you do not come out as you came in. Firstly because it tackles the great internal frictions in Israel, which TV is often hesitant to touch, then because it is not content to create a hero and an antagonist but shapes ambivalent characters, who evolve between several borders that should never be crossed.

The Lesson creator talks about her program

It was at the Cannes ferry terminal, where hordes of journalists are typing at breakneck speed on their keyboards, that we met Deakla Kedar, the creator of The Lesson.

From the height of 46 years, Deakla Kedar is the author of many books published in Israel. The Lesson is his very first TV series.

And it probably won’t be his last. Disturbing, fascinating, serious, The Lesson deserves your full attention, just like its creator.

Madmoizelle: How was born The Lesson ? How long did you take to write it?

It’s an interesting question, because in reality, the idea didn’t come to me just like that, like a stroke of genius. For me, a creation always comes from a question that I ask myself. Something that bothers me, makes me wonder, and obsesses me. This is a question to which I have no answer. For The Lesson, in fact, I saw on television the story of a student who posted on Facebook a post incriminating her teacher. It was 2014. I couldn’t understand how a high school girl could go so far in her mission to end her teacher’s career. I asked myself: “what would make me personally go after a procedure against a professor”. For me, it had to touch on something insulting from an intimate point of view. You know, I was a very bad student, I was always in conflict with my teachers, I was always called to the principal’s office. I wanted to get the teachers fired but I never believed it could actually happen. I said to myself: “if you are 17 and you fire a teacher for his opinions which differ from yours, you would probably feel very bad, very guilty”. I couldn’t find questions for my answers that concerned the two protagonists of the case. Several other similar stories have happened in Israel, even though it is legal for a professor to express his political and social opinions. And in this case, there are many social issues that come into play, beyond the case between the teacher and his student. There is the question of the time, of the gender of the people, of the situations. I thought it was a good story to write, because it interests me deeply.

Miss : In The Lesson, you address the issues of hatred that a people has for another people, you also talk about politics, tolerance, grossophobia etc. There are very powerful and violent scenes, like the student posing for a photo with a gun, with the endorsement of a member of the Israel Defense Forces, and this teacher who loses control and screams everyone, comparing members of the military to war criminals. So many subjects that are very sensitive. How has your program been received in Israel?

It was a real storm, I was not ready for that. I don’t say it like that. From the moment I presented this idea to the producers when the program was released, I had plenty of time to think about this idea, understand the mechanisms and the potential consequences. When I said, “it’s going to be about a conflict between a teacher and a student that goes very, very, very far”, everyone wanted to see this series. Only, when I specified that the conflict was about the Arabs and the Israelis at school, everyone seemed to be disillusioned. So I thought no one would want to watch this series. Because this series does not allow you to relax after a hard day’s work. Me when I’m done working, I want to watch Too Hot to Handle or Love is Blind, but there, it’s still a more serious and heavy subject. So I was not prepared for the fact that a lot of people would watch the show and that it would have a real impact in my country, at least for a non-action drama series. The reactions were very emotional, not only for the right and left but also for teachers, students, children of divorced parents etc. Because our show is about a lot of different and intense things.

Madmoizelle: it is difficult to find information about you in English, on the Internet. Most of the sites that relay your activity are written in Hebrew. Tell us about your journey.

In fact, I have written several books in Israel. Corn The Lesson is my first TV series. I am therefore mainly an author. This is the first show I’ve created from A to Z.

Miss : The Lesson is therefore your first series. What was the biggest challenge you encountered while writing your program?

What was hard was trying to put myself in the shoes of each of my characters. Even if I don’t identify with what the protagonists are saying, I still have to put myself in a position where I will understand their issues. Even when I don’t agree with Lean, for example, who makes very serious and hateful remarks, I have to find a place in myself where I understand why she said what she said. It is for example because she feels insulted because her teacher called her a Nazi. I’m not talking about ideas, opinions, here, but emotions. And that is not easy. As for Amir, I always wondered: “but why won’t he temper things? Why is he participating in this escalation? I had to understand him too. All the ambiguity of this series was to have no protagonist and antagonist but simply two plural people, entangled in their convictions, who must try to understand each other but do not understand each other.

In any case, Deakla Kedar may only be on his very first series, but given the result, he is predicted to have a flourishing future in the world of television, so often hesitant to tackle themes that frighten the world. , so afraid to feed monstrous characters with a little humanity.

Nobody was able to say a word, coming out of the screening of The Lessonbecause it is one of those programs that sweeps away all our preconceptions in less time than it takes to tell.

And for that, The Lesson remains one of the most impressive series we’ve seen in a long time.

Bridgerton Season 2 Is Full Of Indian Fashion Inspiration, And It’s A Splendor

You won’t come out unscathed from the Israeli political series The Lesson, we promise!