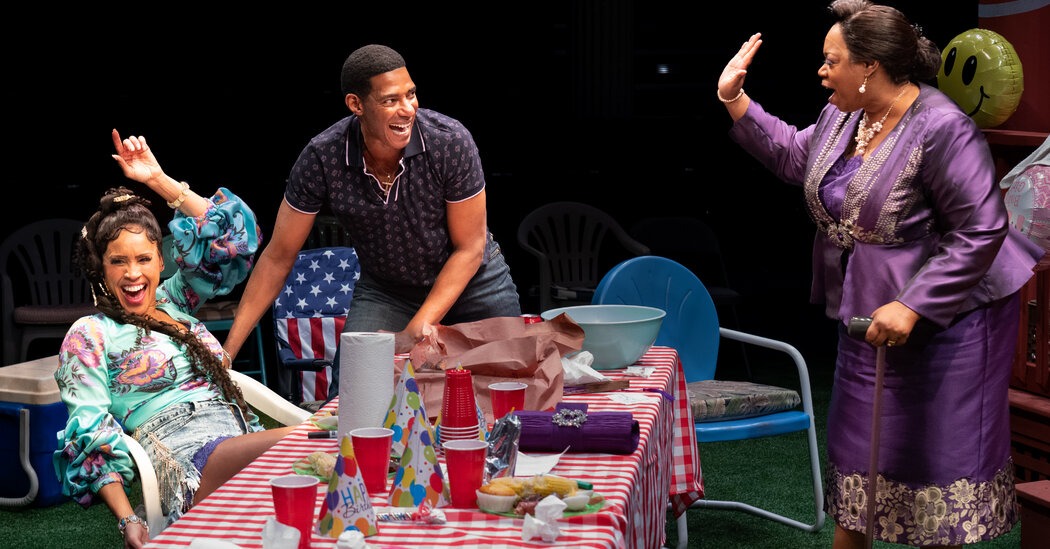 I never venture too far from a theater, but when I wandered away from New York stages, I watched TV and movies. In so many of my favorites from 2022, there’s a sense of humanity to the work, whether that means it features people connecting or just being honest with themselves and others. Here are the plays, musicals, shows and films that have marked me this year.

That 2018 Pulitzer Prize-winning Martyna Majok’s play is written with such empathy and humanity should come as no shock to anyone who has read the script or seen the previous productions. And yet, “Cost of Living” was surprising all the same — breathtaking, even — thanks to the four actors (Gregg Mozgala, Katy Sullivan, Kara Young and David Zayas) and their portrayal of caregivers and patients in a story about how which we take care of ourselves. each other and what it costs us. Relationship plays can so easily turn into sentimental cries that manipulate you to tears, but Jo Bonney’s screenplay, cast, and compassionate direction made this Broadway gem not just tender but true. (Read our review of “ Cost of life. »

When I try to describe this epic work by Belgian theater collective FC Bergman, I get bogged down in contradictions: grotesque but radiant. Chaotic but woven into coherence by theme and feeling. Depressing, but imbued with something even more powerful than joy – total transcendence. Transforming the Harvey Theater into a village, with live animals and a pond, “300 el” was inspired by the biblical story of Noah’s Ark. A film crew circled the stage, offering inside views of a pigeon homicide, a deadly William Tell game and a feast where even the furniture is devoured. When the production ends with song and dance – an indomitable exaltation of sound and movement – ​​it seemed to leave even the air of the theater quivering with excitement. (Read our report on “ 300 el x 50 el x 30 el. »

More than anything — including James Ijames’ clever writing, Saheem Ali’s lively direction, and the cast’s delightful performances — what stood out to me most about the audience’s performance of “Fat Ham” was the joy that seemed to emanate from every person in the room. . Who knew that “Hamlet,” a tragedy full of revenge and murder, could be expanded into a work about homosexuality and black masculinity — and a funny, clever work at that? Ijames, apparently, and Ali, whose brilliant production ended with what looked like a party that everyone, including the audience, was welcome to attend. (Read our review of “ Fatty ham. »

It’s been quite a year for black queer theater, thanks in large part to the Broadway debut of Michael R. Jackson’s mind-blowing and groundbreaking musical, “A Strange Loop.” The production, starring an unforgettable Jaquel Spivey, succeeds on many levels: it provides incisive commentary on black art, the black body, religion, masculinity and homosexuality, while being funny and heartbreaking. As for the technical elements, its structure, choreography and score coalesce into an excellent example of what Broadway can do best. (Read our review of “ A strange loop. »

I knew I was seeing something special when I went to the Ars Nova production of Heather Christian’s ‘Oratorio’, because I was infected with a desperate urge to see it again – before I was even done. to see it for the first time. Growing up with a Catholic upbringing and Sunday Masses, I never felt tied down to religious institutions, but Christian’s deep work, led by Lee Sunday Evans, created a kind of secular Mass for non-believers and Christians alike. believers. The exquisite voice of the cast was magnified by the miniature configuration of the amphitheater-like space, which created a sonic experience that, like the text itself, was both grand and intimate. (Read our review of “ Oratorio for Living Beings. »

I’m a sucker for works that examine language – the politics of it, the limits and freedoms that can be found in words. So I was already on board for Sanaz Toossi’s play, about a class in Iran where students are preparing to take the Test of English as a Foreign Language, or Toefl. Led by Knud Adams, the cast engages audiences in their puns, language stumbles, and individual struggles to learn and assimilate, whether for work, family, or dreams of a life in America. . (Read our review of “ English. »

As a staunch fan of author Neil Gaiman and owner of his entire “Sandman” graphic novel collection, I was so nervous about the Netflix adaptation that I asked a friend — another fan — to watch the first episode with me for emotional support. The series does its characters justice with perfectly cast actors, including a riveting Tom Sturridge, who plays the brooding and awe-inspiring King of Dreams with such finesse and gravitas that it’s as if Morpheus himself had escaped the tapes. drawn. It’s not just the characters that are well matched; the world of “Sandman” is portrayed with great imagination and such reverence for the original artwork that much of the dialogue and panels are reproduced. I can’t wait for season 2. (Read our review book on “The sand man. »

“Severance” may be my new favorite TV series. Maybe I’m hyperbolic, still full of enthusiasm even months after my second time watching it. Adam Scott gives a stellar performance as an employee of a sleazy corporation who chooses to divide his conscience between his job and the outside. The show has an exquisite eye and ear for terror, wit, and mundane interactions, so it manages to be both otherworldly and oddly familiar. As for the screenplay, the dialogues are so fantastic that they make me want to be a better writer. (Read our review of “ Breakup. »

‘Everywhere All at Once’

I’ve often wondered, in our age of multiverse franchises, what a multiverse narrative would look like if the story was guided by the emotional development and interpersonal relationships of the characters rather than just battle scenes, easter eggs and routes to spinoffs and sequels. “Everything, everywhere, all at once” was my response. It contained the unpredictability and expansive possibilities of the multiverse’s frontiers while remaining grounded in one family’s history. Every moment of the film was the bearer of a new delight. (Read our review of “ Everything everywhere all at once. »

When I think back to Robert Icke’s production of “Oresteia,” Aeschylus’ trilogy of Greek tragedies about a family that devours itself from within, I think of a moment. Klytemnestra is in mourning after her husband Agamemnon killed their daughter Iphigenia because of a prophecy that the act would grant his army “good winds” in times of war. After the deed, the winds blow, the doors of the house open, ethereal white light enters, and Klytemnestra is caught in a frenzy of flying papers. But what made the production so memorable was not just the special effects, but Anastasia Hille’s electrifying performance as Klytemnestra, a woman who withdraws into grief and lets it fuel her revenge. (Read our review of “ Oresteia. »

10 steps and screens where I saw the connection

jhm | Grand format : François Staal, lui-même
A thousand and one lives of the kimono are exhibited in Paris
A New Class Of Filmmakers: ABFF and HBO Short Film Award Finalists Bring Their Stories To Life | Bla...
Tweet
Share
Share
Pin