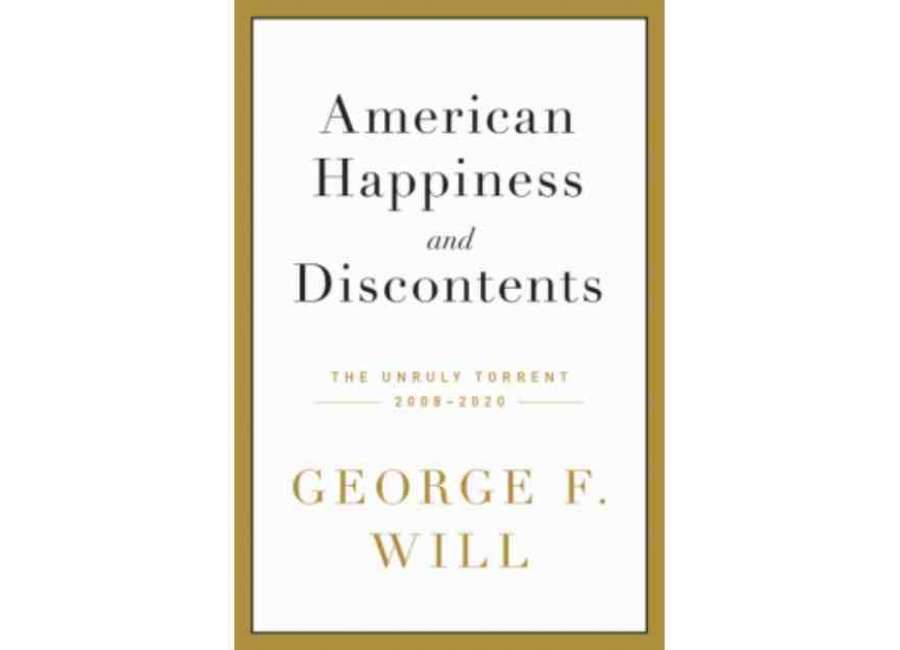 In the introduction to his 16th book, George Will quotes Peter De Vries, who proclaimed, “I write when I’m inspired, and I make sure I’m inspired at nine in the morning.

Will then adds a codicil: he goes to work before 8 am, as he has done for half a century.

Those thousands of hours led to the aforementioned books, a Pulitzer Prize for commentary in 1977, and a reputation as America’s greatest journalist. “American Happiness and Discontents: The Unruly Torrent, 2008-2020” shows that Will remains, at 80, at the height of his powers.

In declarative but rarely straightforward sentences and columns of around 750 words, Will speaks out on major topics that the book helpfully organizes by topic: politics and politics, skirmishes in the culture wars, even games, and more. Over the decades, Will has sensed liberal, conservative, and now libertarian-conservative sensibilities and published them in The Washington Post and in syndication. While being brief, he tries to give his opinion “without being superficial”.

A dive into this 2021 collection confirms Will’s self-assessment. Without stooping to the name-calling so common in what often passes for journalistic commentary today, Will offers his curious and upsetting take on topic after topic. He mocks populism, defends monopolies and deplores political correctness. In a cautiously pessimistic way, Will comes up with something to offend almost everyone. His words, however, serve as catalysts rather than sticks. It makes its readers think.

I find it impossible to read “American Happiness and Discontents” without stopping every few minutes to exclaim, “I didn’t know that!” and “Where the hell did he find that?!” For example, in his “A Year in US History as Disruptive as 2020” column, Will flecks (a verb he likes to use) his 1942 speech with bits and pieces such as the first successful use of penicillin, the banning of cuffs and pleats on men’s clothing. pants and a weird quote from Eugene Talmadge from Georgia about “putting our debutantes to hoe potatoes”. These elements, it seems, are taken from Tracy Campbell’s book (“The Year of Peril: America in 1942”) recommended in the column.

Will frequently draws readers’ attention to books that have attracted him. Topics vary. A book I’ve previously ordered based on Will’s recommendation is “Popular Economics: What the Rolling Stones, Downton Abbey, and LeBron James Can Teach You about Economics” by John Tamny. This is the book that speaks out in favor of such consumer-friendly monopolies. I’m not convinced, but the discussion and the title are attractive.

The books Will recommends on education alone could make for a fascinating lesson reading list. The same goes for articles referenced in the Chronicle of Higher Education and blogs. All the while, Will (a Princeton PhD himself) cautions readers against babbling coming from faculty. “Only the most educated, declaims Will, write so badly. »

Will’s knowledge is so encyclopedic that he seems to have a personal and working knowledge of every major writer or event in history. The latter – or something close to it – emerges from a life of reading, study and reflection. Will acknowledges the former in detail, along with those he appoints, including five research assistants and Sarah Walton, “for his many years of indispensable assistance”. Will includes a poignant personal tribute to Walton, the widow of a soldier killed in Afghanistan in 2008.

Shakespeare, Camus, Ralph Waldo Emerson and Philip Larkin are among the many authors Will cites with ease. The same goes for events and individuals ranging from (in the first column) the signing of the Magna Carta to (in the penultimate, “The Last Doughboy”) Frank Buckles, who served in World War I. world and survived – and thrived – in the Obama administration. Buckles’ extraordinary life is reminiscent of Will’s remarkable career in more ways than one.

I would have liked to see a more complete index for “American Happiness and Discontents”. Too few of the authors and publications that Will talks about are in the index. Eugène Talmadge appears more than once in the text but not at all in the index. Talmadge’s comments about debutantes and, elsewhere, his obnoxious remarks after “America’s Last Mass Lynching” call for indexing, if only as examples of a “how not to rule” variety.

This is a minor complaint, however. Will offers more fascinating insights and details than I can hope to do justice in about 750 words. I highly recommend some or all of the American Happiness and Discontents columns to anyone who cares about our past, or especially how we shape our future.

Dr. Lee Brewer Jones is a Newnan native and professor of English at Georgia State University.