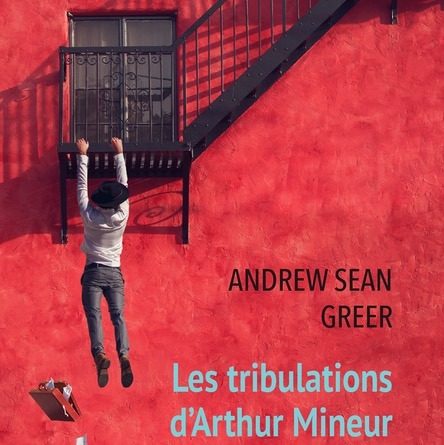 Deceptive: it is the adjective (English) that immediately comes to mind once you have finished reading the Tribulations of Arthur Minor, signed Andrew Sean Greer, which has just been published by Jacqueline Chambon in a translation by Gilbert Cohen-Solal. Deceptive and yet Pulitzer Prize 2018.

On paper this novel had everything to please: Arthur Mineur (Arthur Less in vo), the fiftieth most quite flamboyant, is a writer on the return. His first novel may well be a hit and install it in the firmament of the literary scene, the coup dazzled and Arthur struggles to publish his latest novel, Swift, refused by its editor. Minor may have belonged to the artist collective Russian River School, he was not its charismatic leader and the group now belongs to literary legend. Worse, Arthur has just received an invitation to a wedding, even worse, it is that of his ex-companion, Freddy. Arthur Mineur missed everything, and under the pen of Andrew Sean Greer, less isn’t more.

” Arthur Minor, this sad young man, he had become the sad and old Arthur Minor “. And here is our (anti-) hero on the tour of the Grand Dukes – residences, five weeks of classes in a Berlin university, major talks, festivals, etc. – around the world, a long-distance trip from the USA to Japan via Europe, intended to allow him to escape two traumas: the marriage of his ex and the 50 candles to blow out in the weeks that follow. So everything will be ” minor »In the text, since the name of the character is also his narrative program and his tone.

The mise en abyme is stated very early on, the pitch of the manuscript refused to Mineur is also that of Andrew Sean Greer’s book, ” it was the story of a younger homosexual who was walking around San Francisco. And then, you know, his … his sorrows. (…) Arthur. Sorry to tell you that. It’s a little hard to empathize with a guy like that “. It is a beautiful literary challenge, indeed, that this odyssey around the world of a minor character, pretext for comic sketches, engine of a satire of contemporary literature.

The incipit states, ” from my point of view, the story of Arthur Minor does not seem to turn out so badly. “. No flamboyant heroism, but halftones, faded pastels, a mini chronic depression. The ” deceptive “Is therefore here a style effect, embodied by” Minor, still in free fall from the bridge of his last shattered hopes “. But if the exhibition scene is truly brilliant, if the Berlin episode provokes real bursts of laughter, if the idea of ​​an initiatory anti-trip, a ” adventure worthy of a cosmonaut »Turning into a comic fiasco, could seduce, nothing really takes off. The satire of the world of letters is without relief, the painting of an aging homosexual caricatured, the kind of winding final reversal. The strings of creative writing have their limits …

” Sir, do you like a comedy? But yes, let’s see, everyone loves comedies! »: The dialogue takes place on a New York sidewalk, while a tout is selling Mineur a ticket to a Broadway musical. Everyone loves comedies, indeed, even bitter sweet ones, but Andrew Sean Greer’s comedy is sluggish. One wonders why the Pulitzer crowned a failed book: Is it for the many award mentions in the novel itself? In The Tribulations of Arthur Minor, Robert Brownburn received the award in 1992, on pages 95-96:

” It was the Pulitzer committee, he said evenly. It turns out I’ve mispronounced that name all these years.
– You got it ?
– “Pulitzer” is not pronounced Piou-litzer. It’s Pou-litzer.
Robert looked around the room again:
– Shit then, Arthur, I got the price. “

” Shit then », He had the price. The back cover presents Arthur Mineur as a ” kind of Bridget Jones in the feminine … Prefer the original, or the woman who got the Pulitzer in 1992, Jane Smiley.