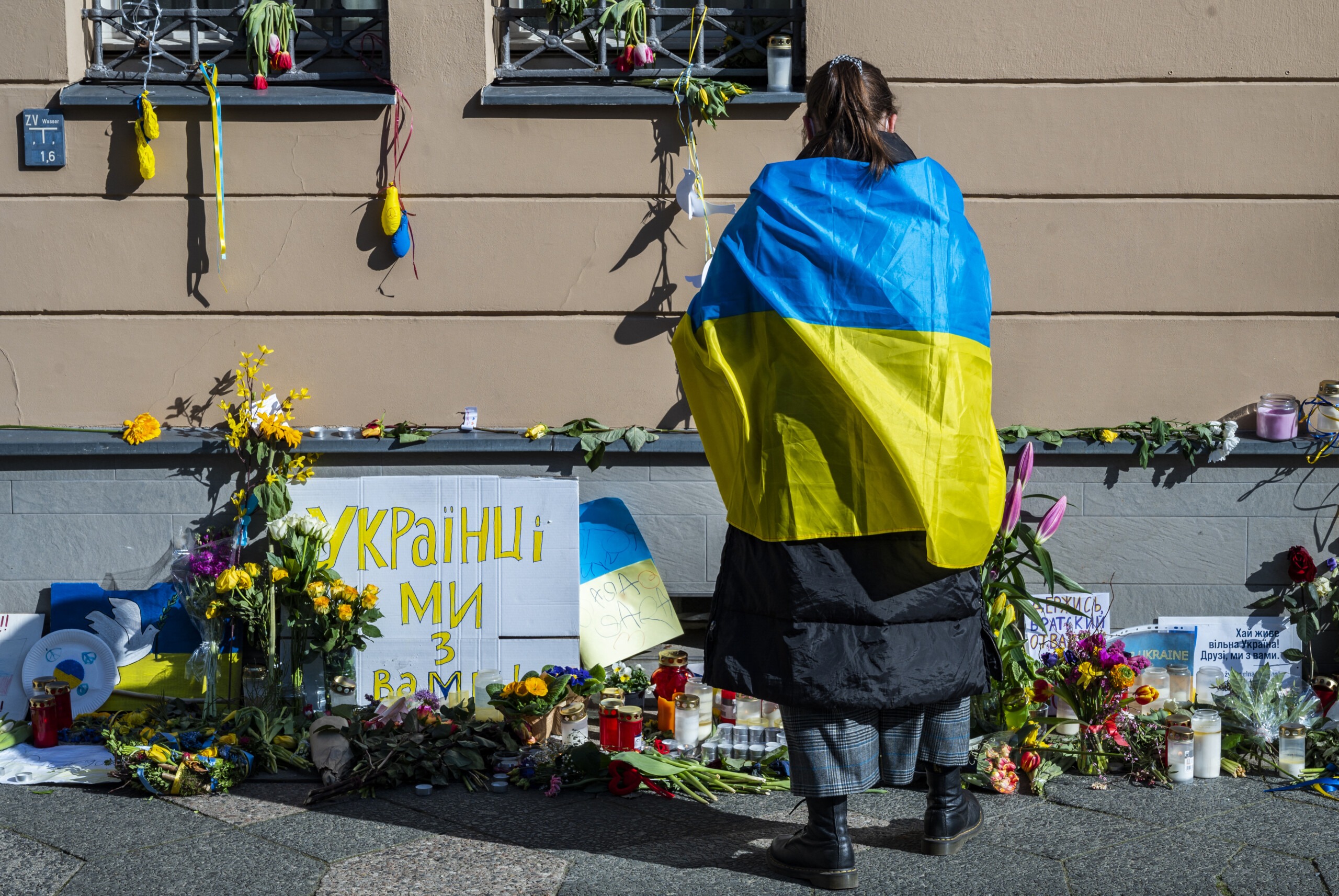 This text, which originally appeared in the American weekly “The Nation”, gives us an inside view of the war in Ukraine. Journalist and writer Benjamin Moser, Pulitzer Prize winner with his biography of Susan Sontag – which will be published in France by Christian Bourgois in the fall, presents his Ukrainian editor Anetta Antonenko and his vision of this conflict.

The arsenal of books: news from the cultural front in Kyiv. With Ukrainian publisher Anetta Antonenko, her books, her chats, her outspokenness – and her weapon.

Ten years ago, I was in Paris for the Salon du Livre, the biggest French publishing event, which brings together publishers from all over the world. Officially, I was there to present the French translation of my biography of Clarice Lispector, but I also had a secret mission: I wanted to meet Ukrainian publishers so that Lispector could be read in her native country. Exactly a century earlier, she and her family had to flee, along the same roads, and no doubt the same streets, that the unfortunate Ukrainian refugees take today.

I didn’t know any Ukrainian publisher. I was not an agent; I had no idea how to go about it; I just felt it was important; and when I finally found a solitary Ukrainian editor, a middle-aged woman named Anetta Antonenko, I tried to explain to her what I expected. Lispector was the greatest modern Brazilian author, I tell her. She was so brilliant, so fascinating that her compatriots enthusiastically described her as “the princess of the portuguese language”. And this proud symbol of Brazilian culture was born in Ukraine. “It’s a matter of national pride, it’s about righting a historical injustice by bringing her back to the country where she was born“, I said.

I refuse to be afraid in my own country.

We must have looked like a comedy duo. I’m almost twice the size of Anetta. Neither she nor I spoke each other’s language properly. And yet, in this miraculous way that happens between people who are made to understand each other, we understood each other. Soon after, Anetta Antonenko Publishers began publishing Clarice’s work. Three volumes have appeared to date, and Anetta is preparing a Ukrainian edition of The Passion according to GH She is also the Ukrainian editor of Bataille, Lorca and Borges and was waiting for a translation of my biography of Susan Sontag.

A few days ago, she wrote to me that her father was a soldier and her mother a doctor: “I know how to shoot, and I know how to heal.“Today this gentle and cultured woman remains locked up in her apartment, barely three kilometers from Kyiv’s central station, in a once peaceful district. “I am at homeshe explained to me during a telephone interview on WhatsApp last weekend. My two cats are with me and I don’t want to hide. I refuse to be afraid in my own country. And so I work as much as I can. Work saves.“She stored ten to fifteen days worth of provisions for herself – and a month for her cats. And like millions of Ukrainians, she owns a gun. At twenty, her father taught her to shoot, and although she celebrated her 60th birthday in January, she is ready to use it when needed. “I’m not afraid to fight. But I think words are an important contribution to our victory. I have received many testimonials of moral support from publishers, agents, authors, translators, embassies and foundations. I do my best to explain our situation to the world.”

She began publishing books exclusively in Ukrainian at a time when, in a largely bilingual country, the majority of literature was only available in Russian. Like most Ukrainians of his generation, Antonenko is fluent in Russian. “Ukraine was the most cultivated region of the former Soviet Union. Ukraine, not Russia, has always been the nation that read the most. My sacred conviction is that the nation is its language. And when Russia invaded us and occupied Donbass and Crimea, I thought that publishing in Ukrainian was the best way for me to help my country.”

His determination paid off. “The economic situation was bad. It was hard morally and financially. But we achieved our five-year goals in just three years.“She has benefited from the revival of the Ukrainian language. In recent years, she observes, “there has been a noticeable increase in the use of the Ukrainian language, both in public and in private.”Antonenko compares the occupation of Ukrainian territory to that of Ukrainian literature. “They ‘appropriated’ our writers – Gogol, Bulgakov, Babel – by declaring that they were Russians. Today they are invading our land claiming it is Russian.“She calls on the world of books to support Ukraine by ceasing all collaboration with Russia. “Exclude Russian stands from book fairs. Stop awarding publishing grants. And the agents must no longer cede Ukrainian rights to Russian publishers. Ignore Russian publishers who claim to have nothing to do with politics. They kept silent. They too have their share of responsibility.”

In just a few days, we have become a strong civil society.

Like so many other Ukrainians, Antonenko is bitter that for a long time Ukrainian warnings were not taken seriously. “We have been sounding the alarm for years.“The country itself was not taken seriously: “We surprised the whole world, but we didn’t surprise ourselves. We got the whole world to respect Ukraine.“She is certain that Ukraine will win in the end. “In just a few days, we have become a strong civil society. There will be casualties, but Putin will tarnish Russia’s image for generations, as Hitler did Germany. Ukraine will never forgive Russia for this war. We are not ‘fraternal’ peoples. Russia will forever remain our enemy.”

Antonenko continues to prepare books, make plans and look forward to the Arsenal Book Festival next May. The festival is named after the old building in Kyiv where it is held, a name that now seems oddly appropriate to Ukrainians who resist with their culture as well as their weapons. Antonenko shows serene confidence. “With Ukraine in our hearts, we will win.”

Translated from English by Gilles Berton